With the common use of the terms redshirt, grayshirt, and now the innovative "Blueshirt," we thought it was time to review many of the terms we use every day in college football to indicate circumstances falling outside of the standard understanding of standard scholarship eligibility. (With Holly and Luke)

Shirtshirted: Will be allowed to buy a shirt, but is offered no scholarship, and is not in fact on the football team.


Periwinkleshirted: Reserved for recruits who are snails. (Um, "snail-Americans." Apologies for not using the proper terminology.


No-Shirted: Just some dude with a six-pack who likes hanging out around the football team. May actually be a homeless guy who just lives near the practice field.

Mesh Shirted: Reserved for clients from New Jersey, homosexuals, and those random black dudes who can just sort of pull that shit off somehow.

Rapeshirted: Receives tax credits for running their car on 100% green biodiesel. (What?)

Goldenshirted: Just a couple of brahs, wearing but a team tee and shorts, in the 80's, lifting mad lbs and fighting their way out of the Cybex jungle one pump at a time.

Henleyshirted - You are either potentially a visceral strong safety with designs on a Rhodes Scholarship or a vampire from HBO's True Blood. Either way, you will inevitably be questioned by an NFL team at some point "why you quit on your football team/species?"

Tunicshirted: Matt Barkley's on his Jesus swag. Why else do you think we caught Osama?

The Vermillion Breathable Onesie Of Injury: The pajama set passed down from Frank Gore to generations of Miami players who, recovering from ACL tears, hang out at the trap, drink Malibu, and break down the volleyball team one lady at a time.

HerbAlpertShirted: Just smooth as fuck and the world should know, that's all.

Porkshirted: Just a shirt made of bacon that we can all eat. (Conceptual)

Blackshirted: Indicates willingness to be pushed around by Washington's offensive line. (WHAT)


Half-shirted:  See "Terrelle Pryor" (Get IT?) (CAUSE HE'S ONLY GOING TO PLAY HALF THE SEASON)

Yellowshirted: No meaning, just reserved for those recruits who are "springs" in the fashion color wheel.

Ambershirted: Recruit to be frozen in ancient tree sap for future use when scholarship limits allow


Cocoashirted. Nothing, it just looks fabulous on you, and brings out your eyes!

Camisoleshirted: Andrew Luck doesn't care what you think, he's coming back this year, and he's wearing this until you feel it, dammit.

Guayaberashirted - Dana Holgersen just doesn't give a shit; it's a Mexican wedding somewhere.

Skirtshirted: Designed by Mike Sherman for the penguin-shaped recruit or coach.

Pistachioshirted: Escapes limits on scholarship numbers by listing position as "snacks" on roster.

UMADshirted: The one worthless player run off by Nick Saban every year under the pretense of "a medical scholarship" just to send oversigning critics into apoplectic rages. (Just doing it on purpose now.) 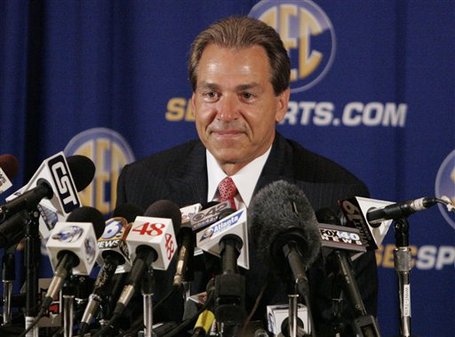 He failed to live up to our expectations, and has joined my rural medicine scholars program. No, really, I dare you to ask that question again. It will go swimmingly for you and me!

Pinkgolfpoloshirted: Single and ready to mingle (but completely willing to transfer to play for a more dapper head coach)

Sepiatoneshirted: Is required to play with leather helmet in a miasma of half-imagined nostalgia.

Yurtshirted: Indicates a special scholarship over the limits for citizens of Mongolia and other trans-national tribespeople of Central Asia.

Lockershirted: 4 years of parabolic drift, 20 years of having your name whispered in the wind but only to a prominent ESPN draft analyst and an octagenerian in Nashville.

Polloshirted: Scholarship for spot on school cockfighting team does not count against total team limit.

Methshirted: Projected to drop to the third round of the NFL draft based on a nasty drug rumor.