Boardmaster Brian supplies this week's big board after surviving the tornadoes that swept across Mississippi, Alabama, Georgia, Tennessee, and lord knows where else. STOP THE VIOLENCE, TORNADOES. We remind you that the donations widget is open for business in the right sidebar, and will remain so for quite some time. Be massively hung like Brian and our spirit animal Reggie Nelson and be generous. (Or whatever the equivalent would be for ladies. We'd pick out certain body parts, but to be honest we weren't picky when we were single, and we won't start to be so in theoretical terms. Play it as it lays!) 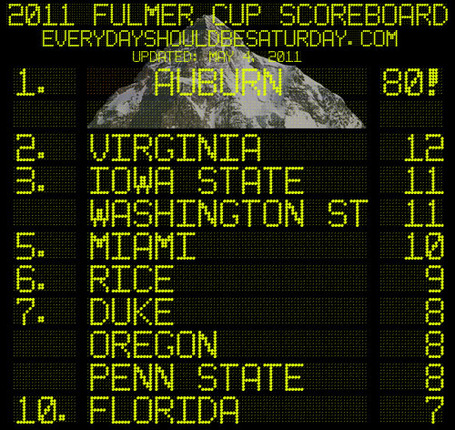 LIKE A BIG FELONIOUS TODDLER IN NEED OF A NAP. Oregon picks up a substantial score thanks to the aggressive napping of Kiko Alonso, the apparent replacement for Casey Matthews at middle linebacker for the Ducks. Alonso, who has previously scored for the Ducks with a DUI charge in 2010 and missed the entire season as a result of the ensuing suspension, broke into a woman's house early last Sunday because he was confused, had missed his four o'clock snack, and could not find his red and blue rest mat he usually crashes out on before fingerpainting and story time.

Responding officers entered the house, Trapp said, and found Alonso inside lying on a bed. Trapp said the arrest report indicates Alonso initially was "noncompliant" with officers, appeared "disoriented and confused," but eventually was taken into custody "without incident."

Poor widdle binky. He was not tested for drugs or alcohol because Oregon police also don't test decapitated bodies for heads or arson victims for burns, and do not subscribe to the Institute of Duh Studies' influential and expensive newsletter.

Since the sanctity of the domestic castle is one of the two pillars of our criminal code along with "the right not to be killed," Alonso gets slapped with a felony burglary charge, which we know is a felony and is three points. The first-degree criminal trespass is less clear, so we conservatively gave it a single point along with the second-degree criminal mischief charge.

By the way, the standard for mischief is too low in the criminal sense. It really should only apply to crimes that are funny and committed while wearing dollar-store comic props. But did he urinate in public while wearing a fake arrow through his head, your honor? We ask for dismissal of the mischief charges unless the prosecution can provide photo evidence.

GONNA HAVE TO WHITTLE YOU UP A PUNISHMENT, SON. Jorge Wright, defensive tackle for the Mountaineers, was picked up for both marijuana possession and for having a firearm without a license last Thursday, both things which we knew were "Illegal" in West Virginia, but that we didn't think were "Illegal."

Wright went on to play in the Blue-Gold game, but Detective Bill Stewart said he was still gathering facts about the case and would deliver the appropriate punishment when he was satisfied with the results. Bill Stewart still thinks he's the head coach at West Virginia, and we just teared up a little bit about him openly whittling on the sidelines while Dana Holgorsen pounds Red Bulls and calls the Mountaineer's seventh offensive TD of the game in the third quarter.

Two misdemeanors mean two points for WVU, and something else for Bill to do before he goes home at three and kicks grass in the yard glumly.

OKLAHOMA ISN'T EVEN TRYING ANYMORE. Caught nabbing clothing for one point's worth of misdemeanor nonsense out of a clothing store? We know late-stage coaching tenure decline when we see it, dammit. The Romans know what we're talking about. Caligula may have been grandiosely crazy, but when the most Julius Nepos could muster was a few measly toga thefts, that's when you knew the parade was really over.

IOWA STATE ENTERS THE FRAY LATE [VIA HAMMERED COACHES]: Ben Barkema, an assistant on the Iowa State staff, was arrested early Sunday for DUI in Ames. Barkema became the second ISU sports coaching assistant to be arrested for drunk driving in a week after the arrest of a basketball assistant last week. Ames might want to just go the go-cart route: line track with cut up tires and an aluminum rail, station irritable teenagers at certain spots, and just let the citizenry have at it. This is brought to you by our continuing desire to turn our nation's roadways into one gigantic Panama City go-kart track.

(Iowa State gets four points for this via a two point DUI, one point bonus for the coaching staff, and one more bonus point for getting their second coach nailed for DUI in a week.)