OH GREAT ANOTHER USELESS TROPHY. Oh, thanks. Another trophy. Should look good next to that enormous pile of not giving a Chinese rat's ass about what you think, world. I don't even know who this bald guy is next to me, but I'll be damned if he didn't follow me around every damn hole on this course. No, I didn't acknowledge him. That only encourages people who want to be all up in your business. 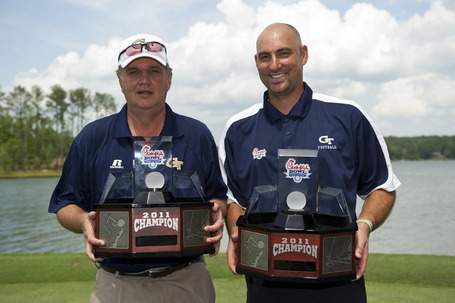 It's the sheen of irritated sweat that really makes that picture. The other golden image from yesterday's Chick-Fil-A Bowl Challenge golf tournament is Steve Spurrier and Houston Nutt playing cornhole. If you clicked that image hoping to see something you did not, you are sick, and we like you for it. In last place: Tom O'Brien and Torry Holt for NC State. (We bet you a shiny American penny that the Notorious T.O.B. uses a belly putter.)

BOISE STATE SELF-IMPOSES. Three offseason practices and three fewer scholarships over the next two years are the football-related result of a 1500 page defense filed with the NCAA against charges of improper benefits in multiple programs at Boise. The lengthy of the report is probably its own defense, since NCAA investigators have to just give up and one point and go TL;DR while closing the case. There has to be a whole comic book stapled in there around page 1200 or so, or at least page after page of "ALL WORK AND NO PLAY MAKES CHRIS PETERSEN A DULL BOY."

REC'D FOR STRONG CHARLIE STRONGNESS. Doug Marrone's techniques for instilling esprit de corps at Syracuse make up the bulk of this article, but please button your top button and flex along with us when you read the best part.

"He came in and said, 'You guys aren't [expletive],' " Stingily says. "That's the first thing Coach Strong did."

As for Marrone, make them get up early, wear ties, have etiquette classes, and all of the thing you probably need to do to recover from years of GERG'ing around the place, wear ties, etc....in other words, all of the things that probably work at a mid-level college program like Syracuse, and the things that would get you run out of top ten program when recruits go "HELL NAW" and hightail it for more lenient environments.

YOU DID NOT SEE QUINTA FUNDERBURK'S FINISHING MOVE. His hair, as it turns out, was just the start.

IF YOU HAVE TWO QBS YOU DON'T REALLY HAVE ONE QB, AND IF YOU HAVE SEVEN YOU HAVE A KRONUM TEAM? In theory, Vandy has seven qbs vying for playing time, and if Steve Spurrier were in this position he would PLAY THEM ALL AT THE SAME TIME. Then he would bench them all and run the WildCock while starting at them poutily. We assume Steve Spurrier has this dream nightly, and has for several decades.

SHITTU ON THE CARRY.  We just want to see what the Stanford band does with this young man's name.