Share All sharing options for: FULMER CUPDATE: IF A MISSISSIPPI COP SAYS YOU'RE DRUNK, THEN YOU'RE DRUNK.

The Fulmer Cupdate this week is brought to you by the Alaskan Pipeline: the only long tube keeping Boardmaster Brian and his fellow pants-Titan Reggie Nelson remotely humble. Long-delayed updates follow, including one or two not on the board as noted. 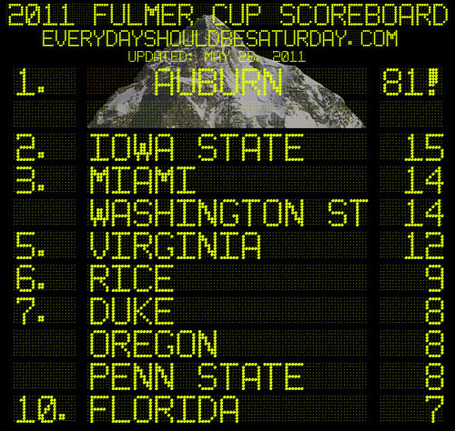 AUBURN. Three of the four players involved in the Fulmer Cup's Krakatoa of points explosions will file for youthful offender status, and let's head off this question at the pass: it does not affect their point totals, so don't ask. Mike McNeil will not apply for the status; he is ineligible, and will be tried as a regular ol' felony offender. They remain way, way ahead of the rest of the field by a margin made possible by the Lee County prosecutor's taste for deliciously layered piles of felony charges.

TOLEDO. Damien McIntosh of Toledo decided to resolve a dispute with his girlfriend by punching her while she was driving his arrest around, making him both a terrible boyfriend and someone who doesn't appreciate a decent chauffeur. The altercation is alleged, and the damage to the woman is not:

nasal fractures, facial contusions and minor head injuries, according to the complaint

A three point felony charge is mandatory, and so is a bonus point for hitting girls, but the extra discretionary bonus point we're adding? That's for being a dick, and it takes the total for this offense to five points. Don't hit people who aren't wearing pads, and that does not include utility personnel wearing kneepads. (Unless they're from Comcast. Broadside those fuckers all you like.)

But that single point for this? Oh, that's just teasing us, now.

OREGON STATE. If it's weird and Fulmer Cup-related, it is a solid wager that the address of origin reads "Corvallis, Oregon." Case in point: 341 pound Castro Masaniai decides that the proper method for mediating a very public conflict with his girlfriend in a Corvallis McDonald's is not to "walk away, go listen to some Joe, and then cool down," but is instead to "attempt to throw the woman into a car." oing this in public and being caught by law enforcement authorities results in the full, unforgiving weight of the legal system hammering down on your glorious Polynesian warrior coiffure: a felony kidnapping 2 charge, along with misdemeanor coercion, disorderly conduct, harassment, and criminal mischief 2 charges. Though we got this in too late to reflect the charges on the Big Board, Masaniai's three point felony and one point charges add up to a total of seven points for the Beavers.

Add in the bonus point for hitting girls--come on, kidnapping charges are certainly close enough--and we have a final total of eight points off this single incident. We are certain this is somewhat exaggerated by the menacing sight of a 340 pound man getting into an argument with a woman in public, but charges are charges. (In Lee County, Alabama he would have been given five felony charges for this and six on Sunday. We repeat: do NOT fuck with Lee County.)

WASHINGTON STATE. The other source for persistent weirdness, like getting a stolen stop sign charge tacked on to your pills and weed charges? Pullman, where Wazzu's Louis Bland earned three points not just for his thorough collection of Lohan-bait, but also for having a stolen piece of public safety notification hanging around the place.

MIAMI. Jeffrey Brown's rape charge gets four points, and the less we talk about it the better, m'kay? M'kay.

MICHIGAN. Darryl Stonum's DUI would be a two-pointer all by itself, but his fondness for "relaxed motoring" is a pattern now, and results in repeat offender status and a bonus point. Three points to Stonum for violating a cardinal rule of Michigan Mandom: when drunk, find a plush leather chair and a volume of hearty but not too fruity poetry to reflect upon until your driver sobers up enough to take the DUI for you. (No, not Wordsworth; a Michigan man never wanders, and even if he did he would not be lonely or anything like a cloud while doing so.)

OLE MISS. Two points for Ole Miss in a double public intox case. If a Mississippi policeman, who is likely drunk, says you're too drunk at 3:50 a.m., then you truly are too drunk. Clarence Jackson and Delvin Jones now both join the Circle Of The Endrunkenated Undependables.

PITT.  Anthony Gonzalez picks up one point for the Pitt Panthers with a marijuana possession charge. Hey, wouldn't it be funny if a cat-named team was caught smoking a huge amount of catnip? That'd make us say MEOWSERS!!!

Don't try smoking catnip, by the way: it's inefficient, may not work at all, and will probably just make you nauseated and give you horrible hallucinations. This message comes to you from our sponsors, public school education.

UNIVERSITY OF LOUISIANA--LAFAYETTE. Two points for a DUI, and unlike every other charge in Louisiana, your ability to have your cousin or uncle "fix" this charge does not apply to us. We kid! Send boudin and a hundred dollar bill and we're sure this can be worked out peaceably among grown men with common interests.