THE PERFECT ENEMY NEVER HIDES, BUT WAITS RIGHT UNDER YOUR NOSE

Share All sharing options for: THE PERFECT ENEMY NEVER HIDES, BUT WAITS RIGHT UNDER YOUR NOSE

We are still catching up after vacation, but let us share a few certainties we can report after a day's worth of rehabbing the brain in an effort to get in tip-top internet shape. The first is that Rich Rodriguez believes he had enemies at Michigan all along, enemies who were working from within to keep him from enacting the change he required of the Michigan program in order to make it successful.

Second, some would have you believe that enemy was Lloyd Carr, and why not? Carr certainly makes a nice patrician villain. He's tall, speaks in the guarded phrases of a man who would describe the murder of a foe as "unfortunate," and probably gapes with horror when he goes to other people's homes and observes the lady of the house treading her own kitchen floors without shoes. Carr certainly could play the villain, and that is precisely why you must advance to point three.

Third, this argument cannot possibly be true, and the real villain in all of this must be lurking in plain sight. Yes, someone who deliberately camouflages his Michigan Man DNA with outlandish diversions: hair styled in a manner unbecoming of a man of substance, for instance, or blatantly embracing a lifestyle of tawdry fashions and temporary pleasures. A man who would deign to have a child out of the bonds of wedlock, and thus invite the silent scorn of neighbors. Heavens, this man might even dare to breed with---gasp!--FOREIGNERS. (And we don't mean Canadians, though that would be scandalous enough.)

Why, if only there were such a man lurking under our noses, doing undignified things like taking his shirt off for things not involving chopping wood or personal hygiene, or even doing something as childish as attending a proletarian and highly unsanitary water park--- 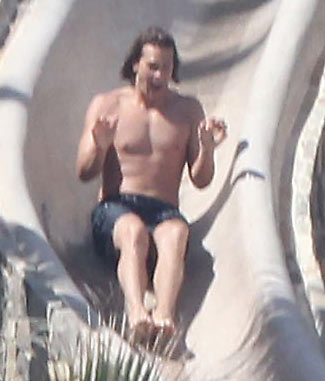 YE GODS. It makes so much sense, and yet eluded us for the longest time. MI5 is so right: always hide in plain sight, and your enemies will never find you. (HT: Brooks for RichRod, and the entire internet for Tom Brady on a waterslide.)