PROBABLY, MAYBE Head Baw Coach and Stephen Garcia are like two objects in orbit that inevitably find their way back to realignment. The Visor was perfectly Steve Spurrier in assessing that the prodigal quarterback will be afforded a second second chance telling reporters Thursday "Stephen Garcia, in all likelihood, will probably maybe be given another chance if he behaves himself the way he should." While the Warrior Poet CBB (chillbroback) probably wishes the endorsement was more akin to that of a queefcore outfit, a great man once said, "probably's two fifth's of the way to a sure thing." That great man was Stephen Garcia. This deserves a celebration befitting of a man of Garcia's measure, one that involves significant drinking and significantly drunk eating:

SCHADURDAY SCHADURDAY Butch Davis' Tarheels are nothing if not consistent.Star defensive end Quinton Coples is being investigated by the NCAA after attending a Washington D.C. based draft party, you know, specifically after the NCAA made everyone aware that this sort of behavior wouldn't exactly be thought of highly. Overshadowing the story is the man, the myth, the legend breaking the news, one Joe Schad gets a hard time around the internets by haters who accuse him of simply reporting on other folks' reporting. Well rats off to ya, Joe. This baby's all yours. To celebrate, we're turning forward the clocks and making a week from next Monday today: 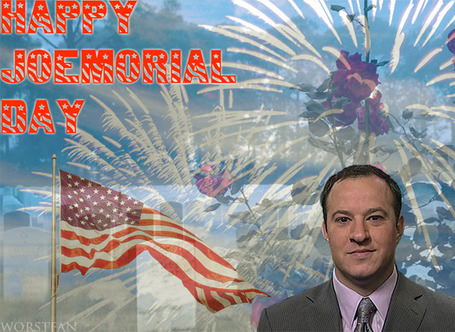 MORE LIKE CHRIS PETERSTUNNED, AMIRITE SBN's Paul Wadlington continues his "Do Work 2k11" summer tour, taking to task the preconceived notion that by virtue of keeping non-BCS conference schools on the up and up on that trajectory, coaches like Boise State's Chris Petersen would automatically be able to take fledging major conference schools (back?) to the highest echelon of the sport. While these guys deserve every bit the credit for the jobs they've done, the scalability (and as historical precedent in most cases would suggest) at the BCS level is anything but a sure thing.

ARE YOU IN A LOVING RELATIONSHIP? YOU WON'T BE IN JULY I have three words for you with respect to EA Sports' NCAA Football 12: fully customizable conferences. Finishing Larry Scott's job and getting Texas, Texas A&M, Texas Tech, and Oklahoma into the Pac-16? The job can be yours. Fulfilling the inevitable and making the aforementioned Horns an independent? Also within the realm of possibilities. And this saying nothing of the BUILD YOUR OWN PLAYBOOK FEATURE. July 12th, you dine, in Four Verts hell.

THOSE WHO STAY WILL BE PINSTRIPE BOWL CHAMPIONS Todd Graham's Pitt Panthers are the latest to suffer from the attrition bug concentrated heavily to the south but also affecting teams nationwide during this, the 104 day away from college football mark in the off-season (hold me, Eightball). Reserve defensive back Kolby Gray and tight end Dan Schneider are headed for the finest NAIA institutions this side of the Greendale Human Beings. What does this mean to the college football landscape? It probably means we necessitate some non-sequitur levity:

STANFORD TO KEEP PLAYING NOOOOTRE DAME /1920SVOICE Stanford AD Bob Bowlsby (also the front man of the indie brit pop outfit Bowlsby) anounced Thursday that the school would continue their series with the Fighting Irish through the 2019 season. This agreement in part gives Notre Dame guaranteed presence to poach California recruits as in the seasons they don't meet the Cardinal in Palo Alto they'll be south in Los Angeles. I see what you did there Brian Kelly.