Share All sharing options for: THE PRESEASON TOP 25 COMPOSITE GETS STOOPS'D, THEN KRAGTHORPED 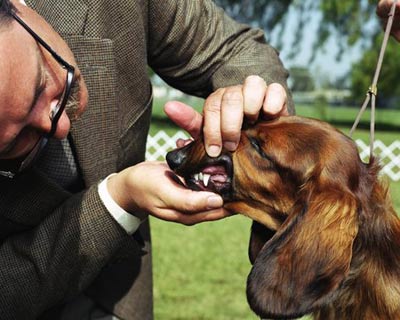 May 7 marked the exact midpoint between the end of the 2010 season and the start of 2011. It was also exactly one week after the last few Division I-A stragglers held their spring games. (Randy Edsall isn't going to be rushed about these things, mind. He's been starting every day with a bowl of piping-hot Cream of Wheat and holding every spring game at the end of April, and he'll be damned if he's gonna start doing either one any differently.) Now that we've gauged everyone's recruiting classes and kinda, sorta seen the teams undertake something resembling an actual football game, we can start checking each team's teeth, examining their glossy coats and making some semi-educated conjecturing about what the preseason top 25 will look like -- assuming, of course, that nobody of importance gets grievously injured or arrested for strangling a nun between now and September 1.

Click on this link and you'll find a composite top 25 cobbled together from some of the slightly more reputable news sources who bother to put out post-spring top 25s. (That means no Bleacher Report and no fly-by-night bookmaking websites whose copy seems to have been translated from Turkish, not that we can necessarily tell any difference between the two.) More sets of rankings will be added as they're issued -- you certainly can't call any such matrix complete until Phil Steele has had his customary late-spring Mountain Dew colonic and released his Holy Grail of preseason publications -- but here's an early look at what the eventual preseason top 25 might superficially resemble, after the jump.

Alabama near the top of the rankings is no surprise; they've got 17 returning starters from a team that won 10 games last year and recently launched an orbiting death-ray satellite, paid for out of Nick Saban's own personal funds, from midfield at Bryant-Denny a few months ago. Curiously, though, they're sandwiched between Oklahoma, whose last big bowl win was more than a decade ago, and LSU, who voluntarily infected itself with the Krag1N1 virus in January. Granted, that may only have been to kill off the Crowtonian hemorrhagic fever that had ravaged the Tigers for four seasons prior, but still, that's a drastic measure any way you slice it. 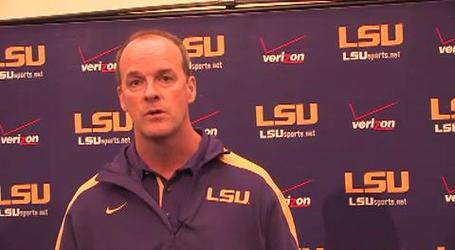 Who am I? Why am I here? And why is that large-hatted gentleman eating the turf?

South Carolina, wearing what would have to be their highest preseason ranking ever. Not bad for a team whose starting quarterback might not even -- oh, who are we kidding? As long as Stephen Garcia manages not to hijack an Airbus A380 between now and September 1, he'll be under center for the Gamecocks this fall, even if Steve Spurrier has to put a Miller High Life tallboy in his hand right before opening kickoff.

Arizona State, all the way up at seventeen duhhWHAAAA? Arizona State, which hasn't had a winning season since 2007 and hasn't been able to keep a quarterback upright in at least that long? The word that keeps popping up in reference to the Sun Devils' 2011 roster is "loaded," a word that not coincidentally could also apply to drunks, baked potatoes, and this Nissan Sentra I saw advertised in the paper the other day. Until we actually see some production from them on the field, I'm going to have to assume this lofty ranking is entirely due to Vontaze Burfict threatening the lives of the writers who posted these rankings, which is actually not all that bad a reason for ranking ASU when you think about it. 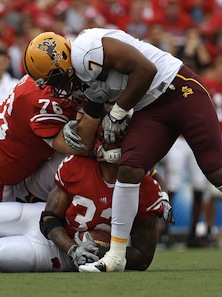 Texas, down at 25 after their first losing season since the Mackovic years. Yeah, just keep running your mouths, sportswriters. Mack Brown has already hired a team of enforcers to show you the error of your ways. (One of them is Vontaze Burfict.)

Ohio State hangs tough in the top 25 despite losing their coach and starting QB for the first five weeks of the season; Auburn also clings to a spot despite returning like -13 starters (I checked) and keeping Ted Roof in charge of their defense. Now, an all-star team composed of the leftover players on both the Buckeye and Tiger squads, that'd be a pretty good team. It would also commit so many NCAA violations that not only would the program be given the death penalty, the NCAA would burn all its equipment and launch the ashes into deep space.

Further updates as more rankings are made available.