YEAH BRING THAT SWEET CASHOLA WAIT HOWIE LONG SHIIIIIIT--- ESPN plans to make up any potential ad revenue lost in a possible NFL lockout by jacking up their rates on college football. Doc Saturday anticipates the arrival of the NFL's lobotomized commercial canon, including our favorite questioner of your manhood, Howie Long. His work in every commercial ever is summarized below. 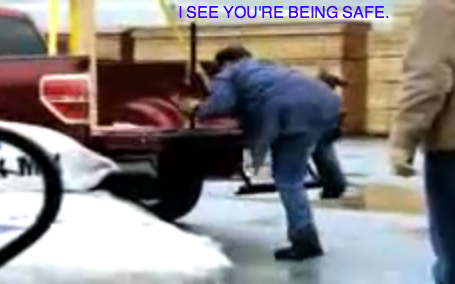 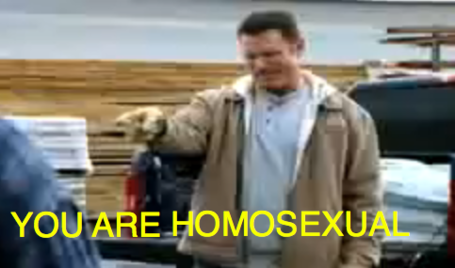 Given that college football now vacillates between ATV commercials, the unending feud between Lowe's and Home Depot, investment plans, our fictional President Dennis Haysbert selling Allstate, and Subway's onslaught, it's not like we're cruising all that far above the Mendoza Line of "Marketing to people or slime mold," but this would be a step toward the slime mold side. (DON'T YOU HATE WOMEN WITH THEIR TALKING AND BREATHING? YOU DON'T? YOU ARE A HOMOSEXUAL.)

This means games could, with the added ads, be even longer. We have no problem with this because it means less real world and more giddy inert football fantasy life, but it could result in drastic measures when games go into their 17th overtime and cricket fans are getting impatient in day three of a WAC game. Settling it by Russian Roulette between the coaches after 38 overtimes does favor one man, however: [NAME REDACTED], who can fire shot after shot into his skull without ill effect, a real advantage in this scenario. (Mack Brown would just send his assistants out there to take the bullet for him HEYOOOOO--)

JOE PA CUTTING DOWN ON TRAVEL BECAUSE STAGECOACH IS AN ARDUOUS METHOD OF TRAVEL. JoePa will be reducing his meetings with Penn State alumni, too, and has not visited a recruit in 40 months. He's old, and this is not news to anyone, and we will just sit here and be sad thinking about how much this sucks for everyone concerned.

THE ADORABLE FAT RACCOON OF THE GULF SOUTH CONFERENCE. That's Terry Bowden in your garbage cans, just plucking the stuff you throw out off the pile and taking it back to his nest at North Alabama. He's a deft one, the little bugger. (Don't pet him! He might be rabid.)

HE DOES LOOK LIKE A MAN FOR SECONDS. Off Tackle Empire has more Brady Hoke and Michigan discussion in May than one could reasonably hope for, but the image of Brady Hoke eating does bring up this inescapable fact: he looks like a man who really puts a hurting on plumbing, and we're not sure why. A man of passionate bowels, so to speak. (A Michigan Man poops emotionally.)

GENE CHIZIK IS WRITING A BOOK. We just hope he has the consistency to also blame God when Auburn loses a game this season, because seeing him do this with a straight face and waiting for the response from horrified onlookers would make our entire fall. (And this is in a season when Stephen Garcia is coming back for a fifth year on the thinnest of ice with Steve Spurrier. That's how amusing it would be.)

THE BAYLOR CELEBRITY HOT TUB PARTY. Come on in. Water's warm, and we're all wearing our swimsuits because Baptists don't get their hot tub on California-style for anyone, sir.

CLEMSON IS HIGH. On their own perfectly legal supply. (K2 is being used by football players to avoid drug tests at some major schools! Your running back is smoking powerful hallucinogenic incense instead of weed! Isn't that great?)

IN OHIO YOU'LL DIE. More dangerous than the U.S. Border? Why yes, actually.

THIS MAKES US CRY. Oh, Trinton, that is sad.

WITH NO ONE YOU MAY LIE. Sex may now be illegal in Florida, which just made it way more fun than it already was.