#ANDIAMBRO, forever and ever, amen. Stephen Garcia needs no introduction in this space, but we aren't here to talk about his recent livening-up of a mandatory life skills workshop, or the tiny floating Matthew McConaughey that hovers at all times above his shoulder, whispering real, applicable life advice. No, it's gubmint shutdown day here in this fine nation of the beautiful game (this is not your excuse to talk politics in the comments, and do not you dare take it as such), so we're going a little anarchistic ourselves and celebrating the best of all common men, throwing up whatever passes for a celebratory hand signal in the hellmaw of Columbia, Sakerlina in recognition of our collective favorite active college football player. Garcia has achieved this pedestal despite being the centerpiece of the offense of one of both EDSBS editors' division rivals, and is the focus of gluts of unnecessarily butthurt attention this week all for being -- we remind you -- a young man in college whose greatest sin seems to be the enjoyment of beer. Simmer the blue fuck down, hand the man his Taneyhill Memorial Life-By-The-Balls-Grabbing Trophy, and appreciate the simple things in life. We love you, bro. We mean that so sincerely.

The rest of the Digital Viking's behests to you today will be short, so we can all have time to get started on looting. Go on, then:

Holly: Ohhh, lordy. You thought the national feathers were a-rufflin' last year when the "Get Your Preak On" ad campaign surfaced? Check out this year's charmingly nose-thumbish invitation to the Preakness infield, running on real television and starring a creature they're calling "Kegasus":

BUT THIS IS UNCOUTH AND MAKES ME WANT TO STAY HOME. Good. More room for the rest of us in the squalor without tripping on your ill-polished Weejuns, sirrah.
[HT: Alert reader Dan]

Orson: The Grilled Cheese Martini. This seems akin to the mythical Chinese torture of planting bamboo underneath a sitting prisoner and watching as the reed grows into the victim and eventually kills them: an invention so bizarre and diabolical by design that one must stand both in appalled silence and reverence at the ingenuity of the thing. With that said, behold Clive's Lounge's most abhorrent and brilliant bit of deranged mixology, the Grilled Cheese Martini. 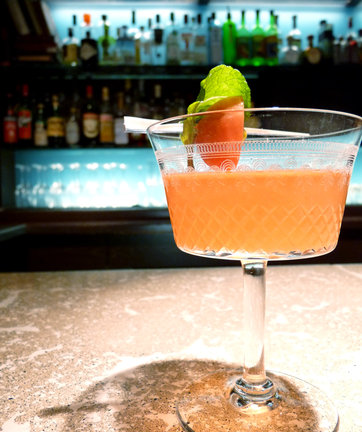 If you want to make your own, YOU'RE A SICK FUCK. But if you do you can go here, where the techniques and background fo the cocktail are laid out for your deranged little mind to ponder . It should go well with any range of activities someone who would actually drink this would like, but most especially the one where you play a marimba made of your victim's bones in the basement.

Orson:  Gochujang, aka. Korean Sriracha or one of the more obscure seeds in our Condiment Bracket. 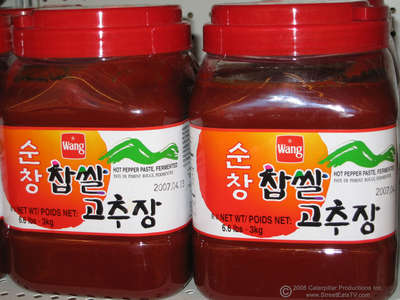 Sesame oil, red pepper paste, and bits of real North Korean tank shards give it its ungodly goodness. Use on eggs, lovers (NO MUCOUS MEMBRANES) or in a fix as a convenient windshield cleaner. TRUE LIES: as with everything in South Korea, bottles of this double as instant anti-personnel grenades in event of NoKo invasion and unchill Kim Jong-Illin'.

Holly: In the walking world, we are something of an enthusiast in the kitchen, possessing no remarkable skills save the making of our late Nana's cursed-recipe five-layer coconut cake, but interested enough about learning new things that we frequent several food blogs when not reading about football. This is how we know that bacon, cupcakes, and all sorts of other delicacies are now, and have been for some time, terribly outré. We are nothing in God's conference if not traditionalists, however, and we will be DAMNED if we are told not to enjoy our pigflesh and portable cakes in the manner we see fit, because they are delicious, and to shun them for reasons of fashion seems to us the height of wrongheadedness. Here are thirty recipes from Southern Living containing bacon, and one for bacon cupcakes, many suitable for you to suggest to your lady for a nice outdoor dinner this weekend if the weather holds. Stand fast against the backfat backlash, and right will prevail.

Holly: The axe-gun as we want it selfishly does not yet exist for mass-market purchase, but will we take a giant machete-shooting slingshot in the meantime to satisfy our needs? 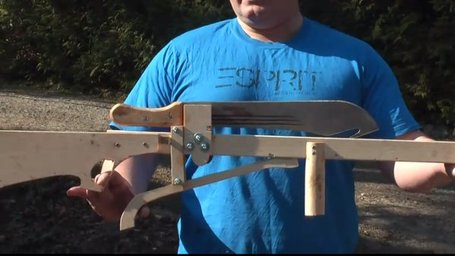 We will. Thanks so much for asking.
[HT: Alert reader Rhys]

Orson: It's not gay if it's with Jamie Hyneman talking about explosions. 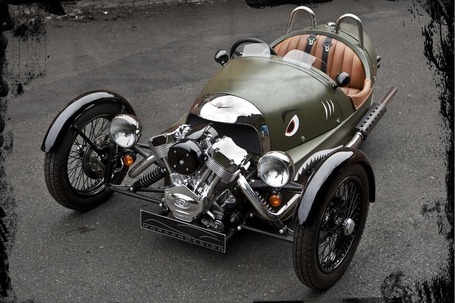 Do not resist the urge to dress up like Mr. Toad and whip this thing through an entire shantytown full of card-playing, gin-swilling chavs at an indecent hour. This is real, this will be for sale, and we may have already redirected college funds just for this purpose. [Starts punting drills early for Magnus.)

Holly: Our feelings about golf in general, Jim Nantz in particular, and the creepshow club that is Augusta National most especially could be best summed up by our suiting up in costumes inspired by Edgar Allan Poe's Conqueror Worm, hopping into this little monster buggy of a golf cart, and mudding all the hell over those precious links:

(The azaleas, we will spare. We have always liked azaleas.)
[HT: Alert reader DHIWAG]

Holly: You want anarchy? Here. We mentioned this last week in the comments, but once upon a time somebody defended, in print, the inclusion of Michael Bay's Armageddon in the Criterion Collection. Parsing our way through this hysterical wrongheaded wrongity-wrongness has, frankly, better equipped us to deal with the fringe elements of our commentariat than any government-mandated anger management classes could hope to accomplish.

Orson: Joe Maphis, The King of the Strings, was so reverent of Maybelle Carter's guitar technique that Johnny Cash and June Carter had him buried next to her. Not before he was dead, mind you; as far as we know, the Carters do not practice Pharaonic burial practices. Maphis did leave one thing buried alive with him, though: the talent to play hayseed speed metal country solos on four different instruments in one song, and all with the skill of a F-22 pilot flying at street level through downtown Tokyo.

A double-necked guitar with your name across both necks? AMAZING HILLBILLY SWAG. We expected at the end for Tex Ritter, the host here, to hand him a woman in labor. Maphis sings, healthy baby, spank on its ass, "Pickin' and a singin..." "WAAAAAAAH"