GET YOUR OWN PIECE OF OVERPRICED HISTORY. 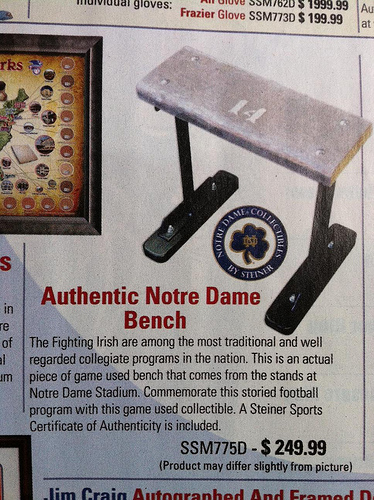 The lady's in transit between American metropoles today, and thus is sending us photos of Skymall's finest including this AMAZING DEAL. People in Skymall mode must not know benches at Notre Dame fly out of the stands broken and snapped into easily salable pieces of overpriced bench all the time, and thus SURE HERE'S MY CREDIT CARD AND I'LL TAKE THE HAT WITH A FAN IN THE BRIM TOO. The parenthetical is special, especially since it means you could be sent a pair of Alexander the Inventor's amazing Gravity Defying Shoes instead of a bench with plausible deniability. (And if you were an Orange Bowl CEO, you could afford both and plenty of either.)

PAINTBALL MASSACRE ENSUES, JOHN BRANTLEY FIRES ENTIRE CARTRIDGE WITHOUT HITTING ANYTHING. Paintball was the team break for spring camp, and we sincerely hope Coach Boom himself was out there covered in body paint waiting behind a tree with a "paint mace," which is really just a huge mace covered in fresh blue paint, and is not legal in any form of paintball that is not actually real combat.

"THIS WILL GET OUT OF CONTROL, GENTLEMEN" DEPT.  And you did this, and we did this, and it's going to be 1992 all over again in the state of Alabama until both programs end up on some form of probation due to a snitching epidemic so appalling and widespread Tupac himself will wag a bony bejeweled finger at all of you from the grave. Popcorn gif goes here.

THE PAC-10 GETTIN' MONEY, SON. Larry Scott is seeking to get around $220 million for the Pac-12's tv rights, which will in all likelihood go to Fox and air on that august network and its subsidiary cable channel FX. Don't make us hate promos for shows we like by sandwiching them into the middle of the broadcast, Fox, though how you'll work a safe-for-America soundbite from the show that brought you "Casablumpkin" is a challenge we'd like to see met. Part of this expansion includes the Pac-12's designs to expand to an international market, and if this leads to gigantic Mongolian Sumo wrestlers becoming dominant defensive tackles, we're totally for this next chapter in "life's script is totally being written by us on the fly."

SUCK IT, CANCER! Michigan State lineman Arthur Ray, Jr. has been cleared to practice this spring after a bout with leg cancer. Awwwww quotes follow.

"I was in class, and I just cried tears of joy," he said. "It felt so good because it just represents so much now. I just feel like I have to represent everybody that’s still dealing with bad things, like chemo. I still remember some of my guys that are still in the hospital."

Huzzah to Ray, and continued best wishes in his recovery. We hope he taunts quarterbacks at the line by screaming "RAMPAAAAAAAAGE" and "Did you see Regis this morning?"

WE LIKE THIS PRONUNCIATION BETTER. Tusclaoosa sounds even more exotic that Tuscaloosa! YAY SPELING NATIONAL CHAMPINSHIP.

OH, ARE YOU ONE OF THOSE THINGS THAT TEARS ACLS ALL THE TIME? RIck Neuheisel forgot who and where Kevin Prince was.