NEGATIVE RECRUITING PITCHES FROM THE YEAR 2011

Share All sharing options for: NEGATIVE RECRUITING PITCHES FROM THE YEAR 2011

Negative recruiting: it's everywhere, it is only intensifying, and it is a college football tradition. Please join us for this EDSBS EXCLUSIVE and examine the latest and most scathing negative recruiting pitches from 2011.

There are no staircases at Vanderbilt, only those creepy old person wheelchair escalator-things like the one the old lady dies on in Gremlins.

Florida State doesn't have dorms, but instead houses their student-athletes in a Rooms-To-Go with two bathrooms and no cable. 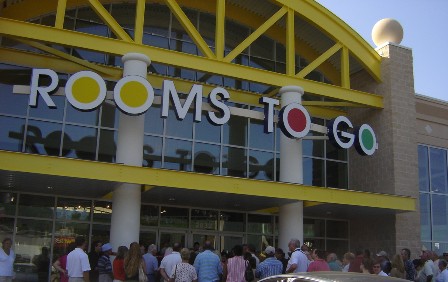 Georgia Tech's is similar, but is housed inside a nearby Ikea. The smell of cinnamon buns sickens them to a man.

Everyone at Ohio State loves Family Guy, and doesn't get the Simpsons.

If this offends you and you run a 4.5, it's doubly clear you're a Michigan man.

And if this offends you but you run a 5.5, you're Northwestern material.

The worst part: he will lose his erection halfway through, and then cry.

Miami's conditioning program is done exclusively in the nude. They don't even want you to put a towel down on the bench or anything.

Be careful. Auburn doesn't deduct payroll taxes from your salary.

They let the boosters at Tennessee shower with the players. 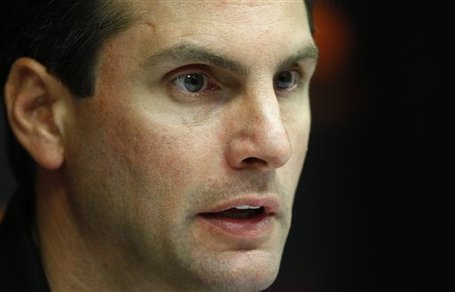 YOU WILL LEARN SHOWER DISCIPLINE

I heard Arkansas is going to drop their agreement with Nike and sign with Big Johnson as their exclusive gear provider.

Coach Calipari may not have been forthright with you. You cannot leave after one year for the NFL, and he is not in fact the football coach.

Tucson looks nice, but what they don't tell you is that come nightfall the Mexicali cartel runs the streets.

Tempe looks nice, but what they don't tell you is that come nightfall feral cats run the street.

They also don't tell you that Dennis Erickson owns every last one of them, and that he has spraypainted them all for his own amusement.

Northwestern won't get you anywhere in life, son. How can you trust a school with such a belief in 19th century geographical designations? They'll probably write 'quadroon' on your application, too.

I heard Indiana is getting relegated to Canada.

I'm sorry, son, but I think you have that school I have never heard of confused with a brand of chicken.

If you go to Iowa, they'll make you squat until you have to be hospitalized.

Michigan does not oversign because players who do not make the cut are turned into quality Domino's pizza toppings. Sam MacGuffie made a delicious Meat Lover's.

Ohio State, son? Let me show you this educational video.

Ohio State football escorts all wear the same pair of sweatpants after sex, and they are forbidden from tradition from washing them.

Woody Hayes is alive and is the massage therapist for the team. He kills three players a year whether they want him to or not.

The weather in Miami is hot because it's actually a suburb of Hell. Your grandmama wouldn't want me to let you go to hell, would she, son?

Maryland, contrary to the rumors you may have heard, is still in Maryland.

Randy Edsall is Bob Davie living under an alias. The real Bob Davie has been played by a large and somewhat lifelike marionette for the past seven years.

If Randy Edsall dies, he will be replaced by contract with this puppet. No one will notice this difference.

Randy Edsall may already be dead, and the puppet already in charge. Just saying.

Randy Edsall called Maryland a dream job, but he didn't tell you it's the dream where you find yourself naked in a high school hallway.

Gainesville, Florida's is built entirely from sheet metal blown into randomly shaped buildings by hurricanes. This doesn't look as much like Frank Gehry as you think it would.

The official city bird of Gainesville is the herpes swallow.

You want to go to UVA and live on the lawn? Well tough shit, that's whites-only housing, son.

The hardest part about playing at UVA is wearing the tie underneath your uniform.

The second is trying to throw a football with a lacrosse stick.

Bud Foster will make you wait tables at his restaurant wearing a full chicken costume. Not because it's a chicken-themed restaurant, but just because it amuses the shit out of him.

Georgia Tech women only give handjobs with rubber gloves on per lab protocols.

Wait, you're into that? I'm sorry, they don't do that at all. I meant to say mittens. Steel-wool mittens.Yes, those are a real thing at Georgia Tech.

Paul Johnson's best friend is a two-by-four. This two-by-four's name is Harlot. If you call it by its proper name, Paul Johnson will say "DON'T SAY THAT ABOUT MY BEST FRIEND," and then beat you into a coma with it.

Harlot is the wide receivers coach and recruiting coordinator.

This should explain a lot.

The town of Clemson revokes gravity every Thursday for maintenance from 3:00 p.m. to 3:12 p.m. It's nowhere near as fun as you might think it would be.

When South Carolina secedes from the union they'll no longer be eligible to compete for national titles. Not that anyone will notice.

On the application for South Carolina where it says "race," put "The Lady In Black, of course: Darlington." It's the connoisseur's choice, and will impress the admissions committee.

Washington? Well, like grunge and the city of Seattle, it was huge in 1991, I guess.

At Washington State players commit crimes in order to go to jail to get away from Pullman.

Well, son, I'll be honest about the Longhorns. Everyone there liked you a lot better three years ago before anyone heard of you and you sold out.

In Lubbock you think they throw tortillas, but they're actually human scalps.

You know why Oklahoma has so many tornadoes, son? An insane excess of whirling, uncontrollable suck, that's why. 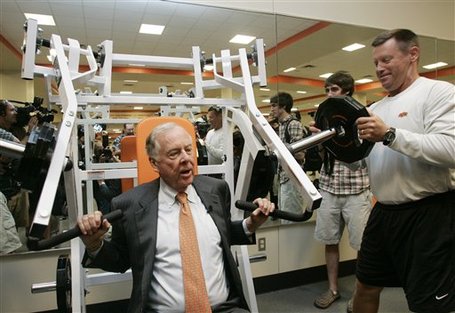 T. Boone Pickens' dentures are made entirely from the teeth of players who didn't make the cut in Stillwater. Those are some nice bicuspids you've got there.

Western Kentucky? That's not even a real state, as far as I know.

I'll just say this if you go to Berkeley: four years is a long time to spend picking hippie crotchweave out of your teeth.

On the upside, you'll never have to floss. Hope you like girl's lacrosse players and poetry that doesn't rhyme.


Actually, it's robotic and it can, and he'll show you, and I've heard that's the worst part.

In fact, he'd like to show the entire team at halftime. Every week.

It's swoosh-shaped, and he paid a recruiting consultant to show pictures of it to recruits. It's more than paid for itself.

Nevada does not run "the Pistol." They "run pistols," and lots of other things across the Sierra into Northern California. You'll be expected to do your share to keep the football program afloat.

I bet Minnesota told you they'd give you a St. Bernard with a barrel of brandy around its neck. To rescue you in the snow, right? And I bet you're expecting me to tell you they're not real. Well they are, but they're all hopeless alcoholics, and always want to borrow your car. When they crash it and don't pay for the repairs, you'll wonder why you ever trusted them in the first place.

Please. You know Rutgers isn't affiliated with the mob. The mob's way better at orchestrating scores than they are.

Syracuse hasn't told you they're NOT going to hire Greg Robinson back, have they? I didn't think so.

Mike Riley sure doesn't want to leave Corvallis, does he? I'm pretty sure we're both picking up on my implication that he's imprisoned a secret family underneath his house for the past ten years, amirite? HELLO COACH FRITZL.

Have you ever wanted to get into a 3 AM knife fight with a coach strung out on more drugs than you've ever heard? At Illinois, you'll pretty much be forced to.

Ralphie is actually a Newfoundland with a gland problem. Sorry.

The rumors are true. There were vampires in Madison for a while, but they all died of liver failure.

Sparty is a very recognizable mascot, and a real asset to Michigan State's athletic program. The least you could do is let him watch you shower after practice.

Mark Dantonio doesn't want to watch you shower. He does want you to clean yourself up after digging that trench in his crawlspace, though.

You know why it's always a different guy who dots the I at the end of Script Ohio, right? He gets ripped limb from limb and eaten at the postgame bonfire. It's tradition.

The drive through window at the campus McDonald's in East Lansing is just a woman handing out cups of gravel.

No, no, we're recruiting that other quarterback as a linebacker.

The girls at Arizona State all have fantastic tits, but no nipples. Not a single one. It gets disconcerting really quickly.

You won't get laid at Tennessee without covering yourself in buck urine.

There are indeed feral packs of wolves wandering NC State's campus, and at least 3 of those wolves are on the 2-deep

Then you're legally considered fair hunting game under TN state law. No one said life wasn't about tradeoffs.

Notre Dame's student life has remain unchanged since the 1920s, which is why all school trips are taken by zeppelin.

You're not going to hear me say a negative thing about Arkansas or their on-campus dining facilities, but I happen to enjoy squirrel.

Mississippi State's fescue management major is considered food sciences. This is because the chancellor is an immortal giant bull named Raymond Telfair, and he is mentally ill.

Naturally, the locals revere him as a god. You think I'm lying? Huh. Cowbells.

You just think about that for a while.

Houston Nutt likes to put players' mothers "in the zone of champions," if you catch my drift. 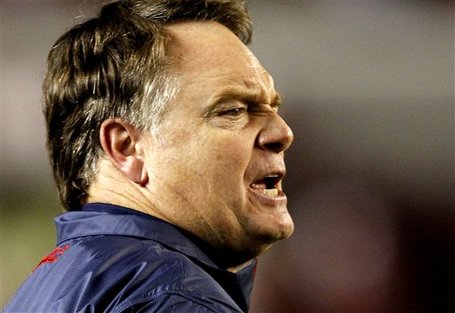 Houston Nutt sings four times a week at Tunica in drag under the name "Slyly Cyrus." His version of "Is It A Crime" is stunning.

Choosing a football program really is like being married, and at Mississippi it's really like that because it may not happen after you get engaged and because they're definitely seeing other people.

Troy, huh? Well, if you like Auburn but hate the pesky air conditioning and lucrative benefits package, I'd go for it.

Les Miles says he'll use you at quarterback? He said the same thing about Jordan Jefferson, right? What happened to him, anyway?

The only music permitted in Oregon State's weight room is Keith Urban. I wouldn't lie about something this grave.

Usher thinks Bobby Petrino is disingenuous and affected. That's all I'll say about that.

Alabama's a good place to play, as long as you don't mind getting arrested for Felony Gave Up A First Down On Goddamn Third And Seven.

At Alabama they really will love you like family. Think about your bathing suit area, and then think about it again.

Bama players have those long bangs to hide the product numbers and barcodes burned into their foreheads.

Drinks are always free for football players in Baton Rouge. Unfortunately, so is the constant threat of cholera.

Those are not power lines you see in the trees in Baton Rouge. They are leeches, and they are surly.

Les Miles wears that huge white hat because he believes that football victories are hamburgers, that he is a heroic chef named Peter Pepper, and that he is fighting the villainous Mr. Pickle, Mr. Egg, and Mr. Hot Dog in a battle to save the world. You may remember this as the plot of the video game Burgertime. Les Miles does not.

Researched with additional reporting by Adam Jacobi and Unsilent Majority