FULMER CUPDATE: PENN STATE GETS INTO THAT CROSS-TRAINING

Share All sharing options for: FULMER CUPDATE: PENN STATE GETS INTO THAT CROSS-TRAINING

Captain, the Submarine is surfacing! Wait, that's just board contributor Brian out for a swim in the lake, trailed by his gigantic bait and tackle. Though he's caught his cock on a submerged Plymouth Volare, he does have enough leash (so to speak) to get out and offer you this update while we call Reggie Nelson for tips on freeing your penis from submerged lake refuse. 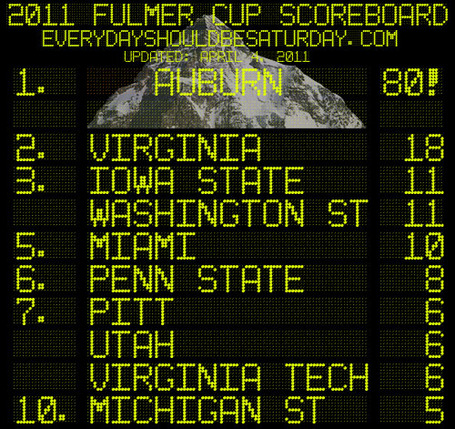 ACHIEVEMENT UNLOCKED! Auburn's unconquerable pile of points aside, this has been an active season, so much so that while doing the Cupdate a tiny [blip] sounded, and on the XBox screen of life we saw this:

Five points is now the threshold for Big Board membership, and we're just getting into April. We don't like to think of it as "OMG what's wrong with athletes." The better term is "frisky, and full of youthful vim!" Our alternate universe lobbyist self is nodding and pointing confidently at current universe us, and we are pointing and nodding back.

PENN STATE CROSS-TRAINING INJECTS NEW LIFE INTO PROGRAM. Penn State fans are damn tetchy. Mention their conditioning program once and reap the whirlwind at your own risk in the form of emails containing looooots of all caps and negative implications about your SEC education. If you do like to send these, please: run spellcheck first, or risk giving us the gift of laughter in your attempt to sell Cybex to us.

We will applaud this, however: cross training has come to Penn State in the form of MMA training. Unsanctioned, spontaneous, and illegal MMA training.

According to State College police, basketball players Tre Bowman, 19, and Taran Buie, 19, face the summary offense for allegedly participating in the fight that took place about 6:26 p.m. Feb. 28 on the fourth floor of Cedarbrook Apartments, 320 E. Beaver Ave. Buie was suspended from the team in December.

Disorderly conduct is one point for the misdemeanor, but teammate involvement from multiple sports earns a bonus point for school spirit for an overall tally of three points for the total incident. Police say "alcohol is believed to be involved," a statement from Lt. Duhsworth Duh-ington.

OKAY THIS IS HORRIBLE SO QUICKLY: Three points felony, one point bonus for being extra horrible to a child, and the Hokies get four points. Let's just not talk about that one again.