THE CLEMSON MENTALITY MAY BE SPREADING

Share All sharing options for: THE CLEMSON MENTALITY MAY BE SPREADING

The commenters' hobby of typing "Fuck Clemson" started as a joke dating well back to 2008 and our complete inability to correctly wager on a Clemson game. One week they would annihilate their competition, and then the next week would choke on the bone of opportunity and die at the hands of a much weaker opponent, and then the cycle would repeat itself until Tommy Bowden's deeply pleated khakis were a mess of nervous sweat and fear pheromones.  Thus, the "Fuck Clemson" meme was born.

It's nothing personal, mind you: it's nonsensical for the most part, and the fabled Tommy Bowden Bitch Mentality left the team with him on his firing. It has now been replaced by Dabo Swinney Inconsistency, a form of Irritable Bowl Syndrome that unlike Tommy Bowden Bitch Mentality is more spastic and unpredictable, as exemplified by a 16-10 loss to Boston College. Like TBBM, it's hard on a pair of pleated khakis.*

*True fact: one must wear pleated khakis to coach at Clemson, per South Carolina law.

The root of Clemson's football inconsistencies, though, may be cultural. For instance, if you heard helicopters and heard barking dogs in your otherwise quiet neighborhood, you'd at least peek your head out the door and see what's going on, right? Because you would be prepared for whatever, like, say, a missing child scenario where a dog did what human beings failed to do, i.e. take care of a freezing 18 month old lost in the woods behind your house?

When we saw the choppers last night, we just assumed a criminal was on the loose, so I locked all the doors. The last thing I was going to do was go outside.

Jesus, what's the point of living in the sticks if you can't be a fearless AR-15 toting redneck ready for live fire, cold moonshine, and hot wayward women running to your door demanding shelter from their insane boyfriends?  I'm actually asking Jesus Christ directly, since they talk to him all the time in long conversations about bad mortgage loans, wayward children, and diabetes. If you could shoot us an email on this topic, dude, that would be appreciated.

The answer to who would react this way? 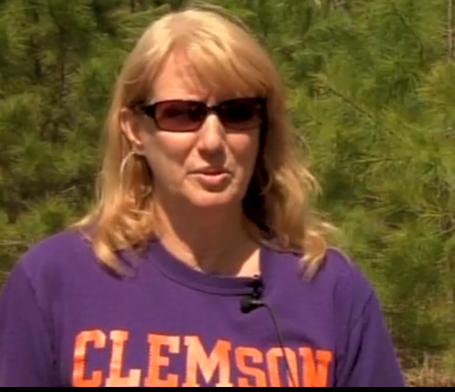 No, that's okay, lady. Skippy the Labrador will be out saving the children. You stay there and earn the equivalent neighbor rating of "The Meineke Car Care Bowl" of community members. A lesson to all EDSBSers: when a survival situation strikes your block, Clemson fans may not be the best choice for first allies.

Our best guess, btw: grab the LSU fans first for ammo, food, and fight. Second, take the Alabamians, because they are very good at claiming everything as theirs, and will attack anyone outside their group with a savagery defying reason. Third, take Notre Dame fans, because you will need someone who has money, and after they do that for you they make a tasty meal, being all well-fed and healthy-like in their upper-middle class way. Fourth, if you're in a hot place,  take the Floridians of any sort, because we function well without air-conditioning and have more weapons than an NRA card-carrying porcupine with borderline personality disorder. Grab someone from West Virginia, too, because you will need someone who can bring down a deer with a paper clip and a jockstrap on two hours' sleep.

Finally, take Michigan State fans. They lived through East Lansing. They can live through anything.