You got two dudes. I got me and a close fiend of mine named Mr. Pipe. Let's have a square dance and see who can do-si-do.

South Carolina is a lot of things. It's hot, semi-malarial, and insane. The state flower is cockfighting, a choice that doesn't even make sense but they stand by it anyway. Its governor fell in love with a llama and deserted his post to wander around the wastes of Argentina because "the conversation was good and for once in my goddamn life I didn't have to worry about mosquitoes." Their relationship was accepted when it was confirmed the llama was a female llama. No one said they were not consistent in South Carolina, because bestiality is cool, but gay bestiality is asking us to take in a lot at once, and they're really sensitive about sudden change and prone to react badly.

South Carolina is also a place where a logging truck driver accosted by two men says "Not today, motherfucker!" and rides a bigass pipe he keeps under his seat and ten gallons of pure bravery to glory. We salute you, unnamed trucker guy, your irrational but admirable defense of other people's property, and your astonishing state. We know it had nothing to do with that, though. It was a matter of the pipe, of bravery, and of bravery and the pipe and the kicking of the ass.

To the DV. (Short due to time constraints, but we made them count.)

Holly: We have made no secret, ever, of the fact that despite its housing of our most be-loathed rivals, Tuscaloosa is our favorite fall road trip. Nothing and no one and no trip nowhere will change this. We have been to Death Valley (the big one). We have been to Autzen. We have been to Morgantown. We have done all these trips with locals and been exposed to all the best places and practices, but it's just personal: Alabama, you are for us in October. We hope you get better as best and as fast as you can, and cannot wait to don the orange, cruise into town and throw back ten or twelve Yellowhammers from Galette's in honor of the beautiful game. They are fruity things, but we're all a little fruity on gamedays, aren't we? 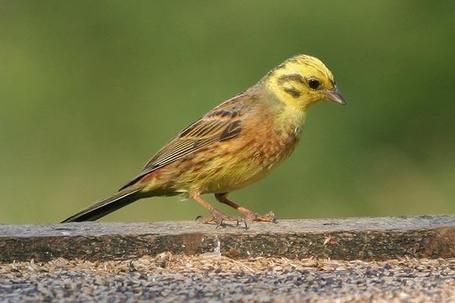 The boozy, citrusy cocktails aren't something you'll find in the typical Spicy Viking's bar repertoire, but they represent the pinnacle of living to us and are a hallmark of our most favorite day of the year. And we will drink them again, with our brothers and sisters in houndstooth and crimson, in just a few short months. Love y'all. 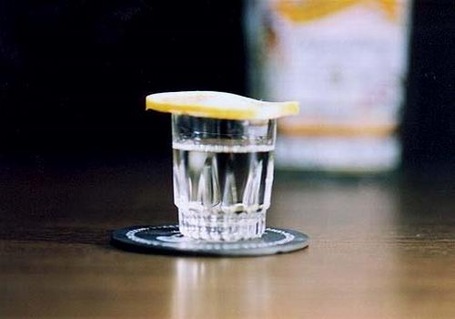 Directions: THROW ALL THAT SHIT OUT AND DRINK A GLASS OF TEQUILA! VIVA DON HAM-CISCO!

Orson: New Orleans. Jazzfest is comign up, and therefore I have no choice but to admit that my favorite food in the world is NEW ORLEANS. Which part? NEW ORLEANS! I'd eat the storm drains, and may have actually done so in a drunken fit in 1995.

Still delicious! By the way, FUCK ALAN RICHMAN IN THE FACE FOREVER.

Holly: Never forgiving any of you for not informing us that this is a thing that can be done at Gritsfest: 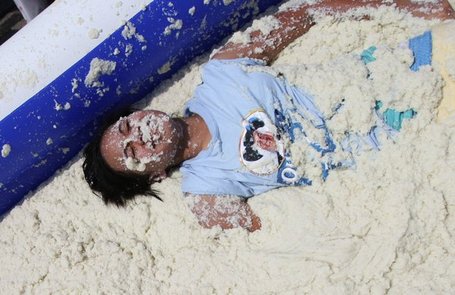 That is absolutely the most unappetizing thing we've seen since a Daytona Beach bar advertised "hot coleslaw wrestling" one fateful spring break that coincided with Bike Week. (Fight in the comments over whose hometown/college town possesses the most deeply disturbing tradition of inappropriate substance-rasslin', ahoy!)

Holly: There are all sorts of ways to make artificial reefs and foster the growth of new coral and fishies in Earth's beautiful waters, but we are rather fond of this method: 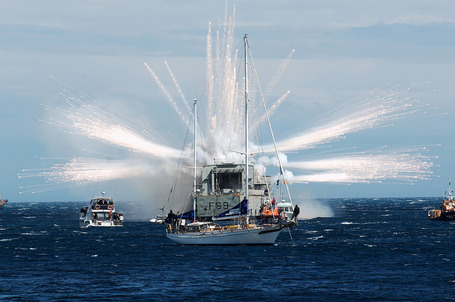 "HMNZS Wellington, a frigate of the Royal New Zealand Navy, was scuttled off the south coast of Wellington, New Zealand, to become a living artificial reef and diving attraction in 2005." Frigates have all the fun.

Orson: Don't mess with tires! They are sensitive and blow up when you least expect it like Swedish uncles!

Orson: We knew a train that ran on bourbon once! His name was Kenny G, and he ruled the pop landscape with his magical brass bourbon straw you called a soprano saxophone! You don't get that kind of volume in your hair without a little bourbon, I tell ya! What a man! He was real, and the car that runs on bourbon sort of isn't, but it's still something we want because maybe the car will write a better song that "Songbird" HAHAHA THAT'S IMPOSSIBLE-- 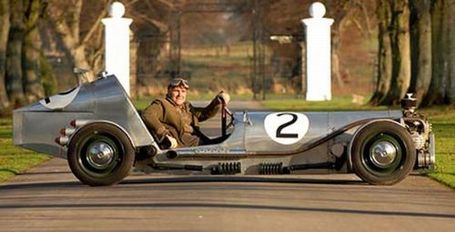 Holly: Can this fifth-wheel parking aid be a thing again? We just want to do high-speed donuts in this thing forEVER, and make a solemn vow and promise NEVER to actually use it to park.

Holly: GOD DAMMIT, TOKYO DRIFT IS AN UNHERALDED CLASSIC IN THE AMERICAN CINEMATIC CANON, AND IF THEY CAN PUT ARMAGEDDON IN THE CRITERION COLLECTION THEY BY-GOD CAN SHOW THIS MOVIE SOME BY-GOD RESPECT. We have strong feelings about this that we can no better deny than we can explain, but it probably has something to do with Lucas Black bitchmaking Zachery Ty Bryan (he's alive!) in an extended pre-credits chase scene.

We never forgave the fourth FF movie for dropping the honest-to-Sutek working title of "Fast And Fourious," but we are lining our asses up at seven sharp tonight for the fifth one, because in the words of all the best social media wags this week, we have wanted to see Vin Diesel and The Rock in the same movie ever since we realized they were different people. This one's set in Brazil, so we have every expectation of a title card reading, "ON THE OTHER OTHER SIDE OF THE WORLD ... "
Orson: The Hood internet. Chicago's finest, and all too capable of making the logical connection between Wu-Tang and Destroyer.