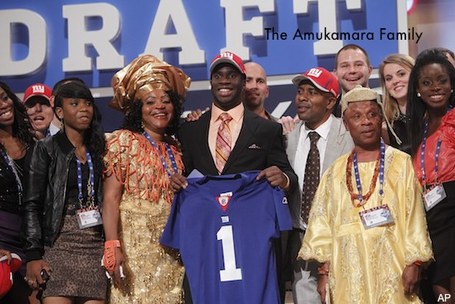 We're all but certain there was a ceremonial shield of some sort backstage, as well. The NCAA produces a shit-ton of student-athletes, and all of them will go pro in something, but the most interesting ones to us of course are the ones who make millions of dollars in the NFL and who wear suits on television.  Graduation Day Notes! Yay!

The mothership has more analysis than one human can really handle, while The Solid Verbal counted Jon Gruden's "THIS GUY"s and had him at 56 as of 10:52 EST last night.

WE WERE THINKING MORE LIKE CONFEDERACY OF DUNCES, BUT GO RIGHT AHEAD. Jim Delany gets Dickensian in his summary of college football's current situation:

You are all weirdos.

The Mandel article goes on to quote Dan Beebe, which is funny because it would have been easier to just go get a quote from Deloss Dodds and eliminate the middle man completely. The gist of the article is that college football is making more money than ever before, that the BCS still stays in posh hotels, and that nothing's changing. Please pass the Marcona Almonds and our Bellini, please.

We have to finish them before our golf junket at 11:00 a.m., which really doesn't effect how we feel about any of this at all. (Now, the massive tv money that comes with it? We'll be frank. That's affecting our judgment to an unhealthy and extreme degree, but OMG is that Perrier-Jouet in this? We knew we tasted toast points.)

EFFICIENCY IS A HALLMARK OF DAN MULLEN'S LIFE, AND THAT IS WHY HE DOES NOT ANSWER TO DANIEL BECAUSE SYLLABLES WASTE VALUABLE TIME.  The Florida offense collapsed after he left especially in terms of scoring efficiency, and this is why. Mullen don't waste time, yardage, or points, son. He also won't stop calling the same play if it works, and that is why Miss State ran the counter like seven hundred times against Florida in the 10-7 debacle last year at the Swamp. And now we want to shoot Steve Addazio into space all over again.

MCNAIR APPEAL, DENIED BY NCAA. Do not pass go, do not collect $200.

MORE INDIANA NEWS THAN YOU WILL EVER SEE IN ONE PLACE AT ONE TIME. Crimson Quarry really likes the uni changes Indiana is working in, while Off-Tackle Empire sums up the Indiana/Purdue rivalry in one compact and slightly painful sentence:

IU-Purdue is one of the longest-lived rivalries in college football, and unfortunately, one of the least consequential on the conference and national stage.

Self-laceration can truly be a form of entertainment, and if you don't believe that statement you should watch Indiana football sometime HEYO--

IOWA'S WRESTLING COACHES CANNOT BE CONTAINED BY YOUR SHIRTS. Iowans are unusual people, and for this we love them.

THE GREATEST FUCKIN' SPEECH EVER. Texas baseball is never going to be mentioned on this blog ever again, but after this no other mention will be necessary.