IT SORT OF WORKS BECAUSE IT IS NEBRASKA. We are certain that in other hands this video would absolutely suck, but the team being Nebraska and the songwriter being someone more than aware of precisely what they are trying to accomplish, this Cornhusker anthem sort of works. Describing yourself as "well-fed' never hurts, and neither does finding an appropriately desolate-looking spot somewhere on an access road between two farms in the middle of nowhere adds to the video's integrity.

If there were a war between fanbases, Nebraska fans would use "Bob Devaney" as their password for strange approaching patrols. Say a long 'A' in the coach's last name, and you will be shot without further warning.

YOU'LL BE FINE, BOYS. Ahh, when nine of eleven members of the BCS task force to evaluate the Fiesta Bowl's case with the BCS are recipients of the Fiesta's largesse via luxury golf junket stroking, you have reason to be optimistic, Fiestans. BTW, we haven't hit the age where luxury golf junkets calm us down. Is it like the pacifier stage of infancy? WAAAAHHHH I HAVE ETHICAL PROBLEMS I--[inserts cigar into mouth, books tee time]---and now I'm cooing and batting at a mobile in my crib. This message brought to you by our theory that 95% of adults are giant infants biding time between spells wearing diapers.

GET YOUR HOMER ON. Tony Barnhart has a whoopin' stick. It's autographed by Vince Dooley and hewn from 100% Georgia Pine, and when he wields it it's kind of like watching your high school principal flip out and hit a kid with a fire extinguisher in the middle of an otherwise run-of-the-mill hallway fight. In response, Jim Delany has harumphed at you, and responded thusly:

He's also assisting in moving Big Ten games back a bit in the day in an effort to not be the conference that finishes their games before you defog your hangover from the night before by getting a head start on the hangover you will have on Sunday.

BEING A GAY LINEBACKER ISN'T EVERYTHING IT'S CRACKED UP TO BE. Six former BCS conference linebackers (and one non-BCS linebacker) discussed being gay on a college football team, and it sounds just about as fun as you imagine it might be.

And another never felt right about being a gay football player in a "masculine brotherhood." "It just feels wrong," he said. "It’s kind of like a peanut butter and jelly with cheese."

Another told of being beaten whenever other players found themselves alone with him, and ultimately injured him so badly it affected his career.

Side note: We are all but sure Tressel is bad toast with an uncertain but approaching date of staleness at this point, but when the obit is written for his tenure at Ohio State, let it be shown that he did something few other football coaches would have done: openly embraced the LGBT community at Ohio State.

PAT DYE'S PANTS CONTINUE THEIR ADVENTURES IN LAKE MARTIN. Bogcephus, the lord of lakeside bacchanals, appears. Meanwhile, it's movie night at Auburn hosted by noted film critic Gus Malzahn, who notes that Harry Potter moves too slowly unlike the only movies fast enough for Gustav's tastes, the Crank series.

RAY DREW WANTS YOU TO LEAVE THAT LONG-HAIRED COUNTRY BOY ALONE. He's a Charlie Daniels fan, and that is only weird because we sort of forgot that Charlie Daniels was alive and are stunned to learn he has not died of a ham overdose yet.

HOLGO WILL MAKE YOU INTO BARBARIANS OF THE PASSING GAME. If you're looking for how you practice well, this is as good an example as you'll find if you're into not wasting time.

NU'KEESE IS NOW A FIGHTING OKRA. Whatever he may have lost in time and potential, he has now gained in a mascot. (The Delta State Fighting Okra, depicted in its full horror after the jump.) 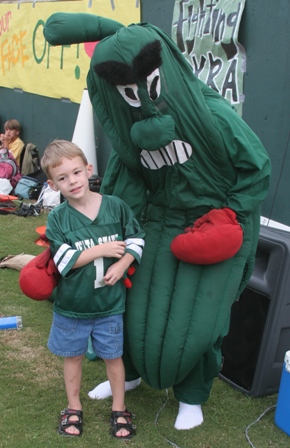