FULMER CUPDATE: JANORIS JENKINS IS SO DUMB, AND YOU'RE NOT HELPING GAINESVILLE

Share All sharing options for: FULMER CUPDATE: JANORIS JENKINS IS SO DUMB, AND YOU'RE NOT HELPING GAINESVILLE

Webmaster Brian diverted himself from the task of lassoing potentially deadly asteroids away from earth using his penis with fellow protector/gladiator Reggie Nelson to make this delightful Fulmer Cup scoreboard for you. Scoring and us not caring about marijuana arrests anywhere, but most especially in Gainesville, follow. 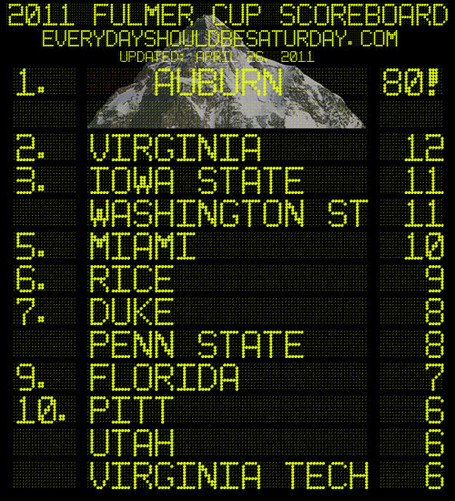 AND NOW A TREATISE ON MARIJUANA, GAINESVILLE, FLORIDA, AND THE OVERLAPPING SPHERES OF CODES LEADING UP TO US NOT CARING AT ALL ABOUT SOMEONE SMOKING WEED BUT INDEED CARING ABOUT SOMEONE BREAKING THE RULES OF THE TEAM.

BTW, funny thing! We just typed all this, and Janoris has now been invited to continue his career elsewhere.

You really do not understand one element of the running gag here. Yes, Florida players get caught for marijuana offenses--constantly, consistently, and almost always in the same manner of casual use in everyday life. Janoris Jenkins has been caught twice this year smoking weed with a nonchalance you normally reserve for filing your nails. It clearly is not a big deal to him, or to his friends, or frankly to the team and its coaches because Jenkins, after two astonishingly stupid arrests, is still on the team.

What many don't understand is how prevalent marijuana is and always has been in Gainesville. If Franklin County, WV was the wettest county in the world, then Gainesville not only knows Holden Caufield, but is in fact the elusive fictional character himself in THAT sense. [wink wink nudge nudge] 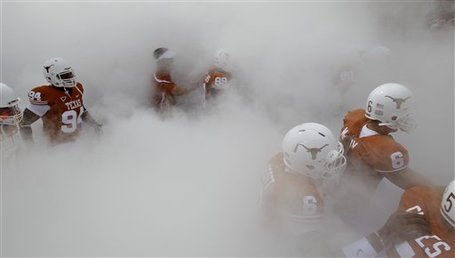 It is everywhere, and we mean this literally. A friend of ours washed his clothes at a laundromat near his apartment, and would sometimes find random things that turned up in his own laundry from the bowels of the ancient dryers. This game of dryer roulette ended up on more than one occasion putting strange bits of marijuana into his pockets, and now you know that the weed fairy lives in gigantic industrial dryers in dryers proximate to campus.

We once found a perfectly good joint that smelled like Bob Marley's hair sitting on the pavement outside of Anderson Hall, and did not take it for fear of an entrapment scheme. On another occasion we watched a GPD unit walk past five guys openly smoking weed to politely ask locals to put out a fire they had in their front yard. The fire was built over a large piece of roadkill deer the guys had decided to cook in that yard. This was fifteen yards or so off of 13th street. GPD, as you would imagine, has a lot to deal with in terms of problems, and they like to prioritize.

Jenkins got dumb in how he did it, but whatever kind of dumb he's got, let's just say that Gainesville as a whole is not helping it by being its stonerish, dazed self. We don't really care if half the team is smoking weed as long as they don't get caught, because [LEGALIZATION SENTIMENT NO ONE CARES BULLSHIT HEY THE 2006 TEAM TURNED OUT ALRIGHT AND THEY WERE BY LEGAL DEFINITION A REGGAE BAND AND A LEGAL CALIFORNIA DISPENSARY.] Just stay at home next time, be nice to your neighbors, and then you can avoid all this bullshit in the first place.

For the misdemeanor possession he gets a single point,  and for the repeat offender status he gets another. TWO OTHER weed arrests for Kedric Johnston and Chris Martin of Florida up the score with a misdemeanor point for both, thus earning Florida seven points in all once we award a bonus point for them being our homeboys, and thus qualifying for the Gator bonus for all Fulmer Cup action attributed to Florida.  JUST STAY ON THE GODDAMN COUCH NEXT TIME AND PLAY SOME VIDEO GAMES FOR CHRISSAKES, Y'ALL.

RICE OWLS GET GULLY. You are not having a stroke: Rice not only makes the Fulmer Cup, but scores nine points via two felony firearms charges, two weed possession charges, and one minor theft misdemeanor, which if it involves marijuana undoubtedly concerns someone's lighter and/or a DVD. Rice police records are private due to Rice being a private university, but let's just assume the two firearms charges were related to the ownership of a howitzer.*

*Complete irresponsible speculation. It was a mortar and you know it.

DUKE RUNS THAT EGGSHELL WHITE. A Duke football player dealt in what is a very Duke drug to deal in: the drug of the elected, cocaine. Linebacker Kammie Michaels, GO HARD IN THE PAINT (because Duke people really only understand basketball metaphors, not because they're big Waka Flocka fans.)

The paper quoted police spokesperson Kammie Michael as saying police confiscated 29.6 grams of powder cocaine and 72.4 grams of marijuana. Glover was charged with trafficking in cocaine and possession of marijuana and cocaine with the intent to sell and deliver.

All by himself Michael gets Duke eight points in two three-point felony charges and two one-point misdemeanor charges, and due to the words "trafficking" will likely be going to jail for quite a spell. Duke will have to replace his playing time at linebacker. In other news, Duke has linebackers.

NO CHARGES FILED, BUT PLEASE NOTE THIS. Starkville, Mississippi WILL BREAK YOUR DAMN JAW NO MATTER HOW VALUABLE YOU MAY BE TO THE DEPTH CHART.