RITES OF SPRING: YOU PANIC ABOUT YOUR OFFENSE [CC: EVERYONE]

Share All sharing options for: RITES OF SPRING: YOU PANIC ABOUT YOUR OFFENSE [CC: EVERYONE]

WE CALL THIS YOGA POSE "THE TEETERING IBIS." Yes, that's it...balance the leg on the helmet, now breathe in and place your weight on the right arm... 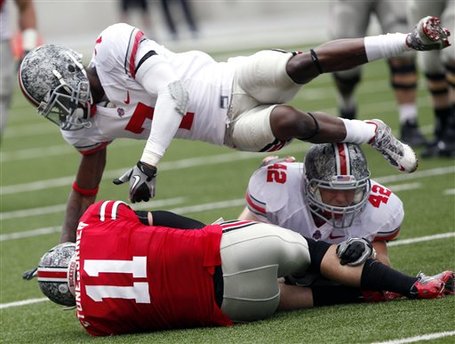 Everyone on offense looked horrible at the Ohio State game, but most especially QB Joe Bauserman, whose blazing performance under center and in the gun inspired this glowing writeup from Along the Olentangy:

Ohio State simply can't go four or five wide when Bauserman is at quarterback, because they can't protect him. He doesn't get rid of the ball fast enough, and he has a weak arm and is relatively immobile.

This smells like "your starting quarterback, Ohio State" if we think we know the Ohio State coaching staff, and we think we do because we get to read all of their emails courtesy of the Columbus Dispatch. (Jim Bollman uses more emoticons than a man over twenty really should.)

Eleven Warriors wonders why the staff would  "waste meaningful game snaps on a 45 year old senior anyway," and we have one word to answer this: experience. We stare meaningfully at you and nod while jutting the jaw out while we say that. Try it! It makes everything seem so much more sage when you do it. (He's not the starter, and this is #TrollGazin' at its hardest.)

IN MORE POSITIVE USES OF THE PHRASING. USC prefers to use the term "defense flexes its muscles" when analyzing its own spring game where the defense took turns decleating quarterbacks and intercepting them in the endzone. Matt Barkley had a mediocre day at quarterback, but did catch the game's only passing TD as a receiver on a play USC had not practiced whatsoever.

"We practiced that zero," Barkley said. "We hadn’t gone over that at all. In the huddle Kiff just said, ‘let’s do this.’"

The stance of this blog is generally anti-Kiffin, but this kind of improvisational gusto is thoroughly applauded regardless of authorship. Kiffykins himself says he has no idea how good the team is, though the run game and defense are in somewhat in place and that's way more than most teams can say at this point.

YOU'RE DAMN RIGHT KENTUCKY IS THE THIRD TEAM MENTIONED HERE. Just to be all contrarian, but it is worth noting that with Morgan Newton growing into his role as starter the Kentucky offense could look a bit more like the 2009 Andre' Woodson attack (provided the receivers actually begin catching the ball, of course.) 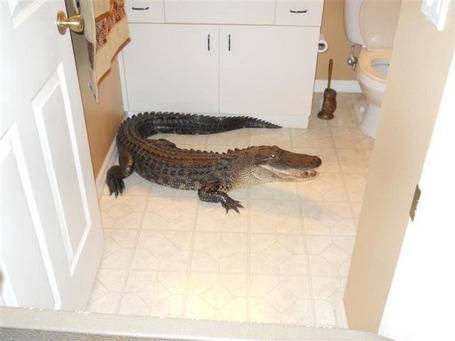 BELIEVE IT OR NOT, UCLA HAD A SPRING GAME. They did, though you wouldn't know it from the lack of notice UCLA's own website gave it in advance. The quarterbacks were wearing no-contact jerseys, but that still didn't stop the passing game from sucking the heinous suck of the UCLA offense under Neuheisel, something that seems triply weird since at one point not only was Norm Chow on board as OC but also because Neuheisel at one point enjoyed a reputation as a QB guru of sorts. Oh, and the "triple" bit:" it's year four of the Neuheisel treatment, and someone better start looking like Marcus Tuiasosopo or get on probation or something, because it was our understanding that that was the deal.

ILLINOIS FOOTBALL LET'S GET EXCITED IMPROVEMENT YEAH.  That happened, and [NAME REDACTED] used the word "improvement." Please mark the appropriate square on your stock coaching patter bingo chart and proceed to the next item.

GEORGIA TECH SHOWED OFF ITS AMAZING NEW PASSING GAME. Just kidding, it was horrible and won't matter because Tevin Washington throwing the ball 26 times was Paul Johnson's way of showing him how much he doesn't like him because passing isn't real football and Paul Johnson knows it. Otherwise, the only real news of note was the impressive running of QB Synjyn Days, who you may remember as the protagonist of some awful 1995 direct-to-video movie about dystopian rollerblading gangs who help an army of trance DJs conquer an evil corporation for the control of Rave City. It's called Rave City: Blades To Tyranny, and it really should be real because that and an accompanying soundtrack by the Crystal Method would be the most 1995 thing ever.

HALLO GAME MANAGER. Virginia Tech looks like they've found the safe, bureaucratic QB type in Logan Thomas, and we don't mean that in the bad way at all. Happy Frank Beamer smells like a freshly opened box of graham crackers. Did you know that? The diabetics of Blacksburg flock to him in spring and show him pictures of blocked punts just to savor the aroma.

KILL KILL KILL KILL IS THE NAME OF THEIR NEW COACH WHO IS NOT IMPRESSED. Minnesota leaves spring practice without a starting QB, and Jerry Kill's fine with that. He concluded his press conference by twitching his nose, shooting two reporters in non-lethal locations (irony!), and then burrowed away without saying a word. 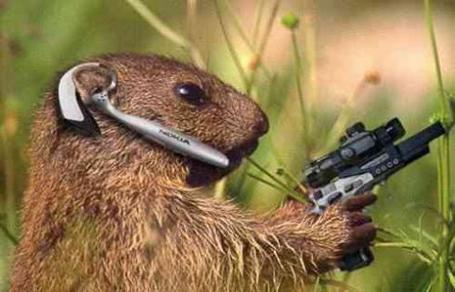 AND FINALLY, NAVY FOOTBALL PLAYS IN SLOP. Navy's game ended with a fumble recovery in the endzone, and that's about all you need to know given the sloppy conditions they played in this weekend.