Share All sharing options for: JEFE TRESSEL ADDRESSES THE PEOPLE

Reporter: Coach Tressel, what do you have to say to the NCAA's allegations filed this past Friday and made public today of intentionally leading NCAA investigators and Ohio State administrators astray during the investigation into Tatgate? I know you can't comment on ongoing investigations, and haven't in the past, but-- 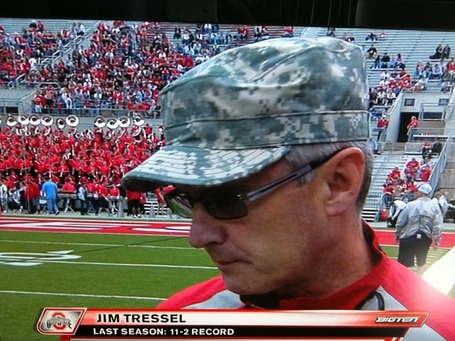 Tressel: The past is the concern of tyrants, historians, and nostalgics. I and the people belong to the future. We are one and the same in this regard. I speak to you from the future. The words register in the present. By the time they are understood, you are in the past toying with them while we sail forward. Such is the way of those who follow.

Reporter: Coach, I'm sorry, could you please clarify those remarks?

Tressel: Perfect truth needs no clarification save the confusion of those who cannot understand it asking for its clarification. This team understands me well enough. So will history.

Tressel: My grandfather was a general in the military.

Reporter: I thought you said he was a dairy farmer.

Tressel: His troops were cattle, and they fired bullets made of lactose and bravery. He taught me never to surrender. When they came for him, he was ready, and he beat the banditos off his land. I shall do the same with the scoundrel NCAA.

Reporter: Your grandfather fought bandits on a farm in Ohio?

Tressel: You call these bandits the "hoof and mouth disease." I call them by their true name: bandits.

Reporter: I don't think that's even the same thing, coach.

Tressel: The small-minded never would. I am the people. The people are myself. We are I is us is myself. To extract one from the other is to rob a father of his children, and a children of their father of their children's father. Please see the lessons of "I'm My Own Grandpa," a song which explains my relationship to the people with perfect clarity.

Reporter: Will you resign if Ohio State faces sanctions?

Tressel: Would the sun resign from its shine? I think not. By definition it is impossible. The NCAA has a psychological problem. It believes it to be an empire that must say what is what when it does not concern them.

Let them collect their bouncyball checks. I think they need a less biased home than their current place of Indiana. Standing awash in a gigantic field of sour corn and pig droppings will make any man behave as a tyrant. I invite them to move to Columbus, Ohio, a far more suitable host for their organization. We have space. We have the people.

Reporter: Are you denying these charges, then?

Tressel: I would deny the charges of any court without authority. Are the people on the jury? Do they wear the scarlet and gray mojo of my people? Do they wash down justice with one to eleven canned beers of the domestic variety? Have they addressed each other as "bro", and worn the cap which is fitted? Do they wear Joe Bauserman jerseys with pride? If not, then no. I do not recognize this court.

Reporter: Are you personally challenging the NCAA?

Tressel: I always challenge the Devil when I see him. I believe they are the Devil.

Reporter: Do you want to correct these remarks?

An assistant gives Jim Tressel a live burro with Ohio State colored livery on it. 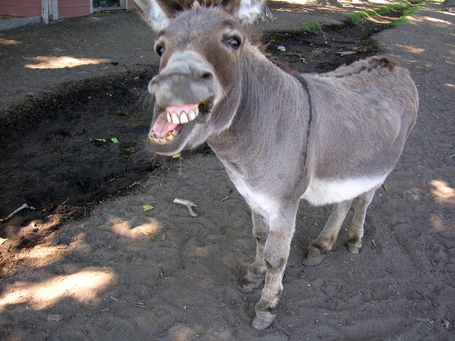 Reporter: Is that the burro you are going to whip, Coach Tressel?

Tressel: No, this is Pepe. He is my new friend. He is also going to be our new compliance man.

Reporter: Is this a joke?

Tressel: Does a burro eat trash and stray papers like a fat man eats Pringles? The answer is yes to both.

Tressel: Again, you wouldn't. But let us say that with Pepe around, there will be no paper for anyone to follow, and that Jefe Tressel will be making calls and texts on his private phone from now on. Also, Pepe is an example of our commitment to being environmentally responsible at Ohio State. The grass at Ohio Stadium shall be green in two ways as Pepe fertilizes it with the people's burro-flop.

Reporter: In conclusion, do you have any further comment on the report?

Tressel: Only that is is full of what Pepe already produces from his non-conversational end, and is not fit to spread on the tulip beds of Donkey Emmert or his cornpoop cronies in Indiana. Jefe Tressel bids you goodbye.  Direct all further questions to Pepe, including those for the NCAA. He speaks their language perfectly.

Reporter: He does seem fluent, Coach.

Tressel: It's Jefe, but yes, you hear the resemblance. Perhaps even you are not without hope, bro-comrade. Adios.