ALL HAIL THE QUEEN. Wisconsin had their spring game, and there is information to be relayed about it, but first we must call your attention to the best-monikered newscaster in all of America: Madison's own News3 anchor MATT QUEEN. 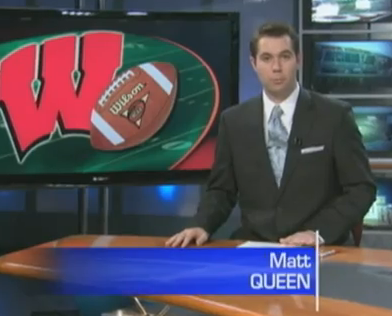 Why he does not sign on with "Now I'm Here, Matt Queen with you--" is probably an indication of his having no appreciation of the name he shares with the greatest band ever, or that he wants to be taken seriously despite being named MATT QUEEN. (The desire to not sound like Chris Berman is commendable.) His report on the Badgers' spring game is like every other summary we read: the offense was so bad as to remind people of Paul Chryst's initial summary of his first offense in 2005.

It is spring. We're sure it's not as bad as it looks, unless you're John Brantley or the soon-to-be-torn-ACL lurking in the knee of whomever is going to start for UCLA before, you know, tearing their ACL on the third snap of the season. We'll have a spring game roundup in a bit, but first the moldering cheese from the weekend.

SHOULDN'T HAVE GOTTEN THAT NORDIC TRACK, TOTAL WASTE OF MONEY. Rich Rodriguez admits going to Michigan was a bad idea, but repeats that they were just about to turn the corner, and he should really stop saying that as long as wants another job and everyone else remembers how he gave Greg Robinson a job and then kept him on despite the Michigan defense turning into a lacrosse team minus the helpful sticks. (Read this! It's funny because it's horrible in its contrasts, and will make Michigan fans weep blood!)

MORE OLD CHEESE/DUH STUDIES. Georgia didn't try hard last season, per Mark Richt himself.. We don't know about this. Aaron Murray threw that interception to Will Hill in overtime on October 30, 2010 with a lot of effort. He can't be blamed in this.

THERE IS NO COMMENT ABOUT HIDING BODIES HERE NOPE NONE.  Jay Jacobs at one point wanted to work with cleaning up dead bodies so they'd be presentable in public. This is fact, and not at all a joke about Auburn. Also, someone is insane and just wants to collect your phone numbers. We can do this too! HEY CAM NEWTON IF YOU PUNCH THE MOON WE'LL GIVE YOU A JILLION DOLLARS PLEASE INQUIRE AT camnewtonwillpunchthemoonifhesreallyawesome@geocities.biz. UNLESS YOU'RE SCARED, AMIRITE?

CUPDATE COMING, BUT YES: Janoris Jenkins really likes weed. So does everyone else in Gainesville, including two other Florida players who were busted for weed earlier this year. This is bad because it breaks team rules, but otherwise we could give two shits about anyone being arrested for marijuana. Legalize it and we will tolerate it but not use it, because smoke in your lungs is just bad, and the brownies create a feedback loop of munchies/brownies/three-day catatonia.

(But yes, points to be awarded in a bit on the Big Board, and yeah, Janoris would be gone if he wasn't our starting corner, because starters at valuable positions receive different treatment. It's not fair, but that is what's going to happen.)

ARRRRGGGHHHHH. Georgia Tech, you might want to wash that off. We don't know how you do that over the internet, but you're Techies. You figure that part out.

YOU NIMBLE OLD ZOMBIE, YOU. Joe Paterno may have sailed into a new and previously uncharted quadrant of the map of the sea of not giving a fuck, and for this we salute him:

Funniest part –  All the guys are up there in suit jackets and ties except for Moye who only had a shirt & tie.  Joe’s best line of the day was something to the effect of, "I should probably call Jim Tressel to see if he can find someone to sell Derek a jacket"

Fine, Joe. See if you ever get a tat in Columbus again. (JoePa has a full back piece depicting the battle of Actium, and still needs the bit where the UFOs come in and win it for Octavian and steal away Cleopatra. Mr. Paterno has very controversial opinions on Roman history.) Historical documents in Tressel's own potential Actium continue to surface.