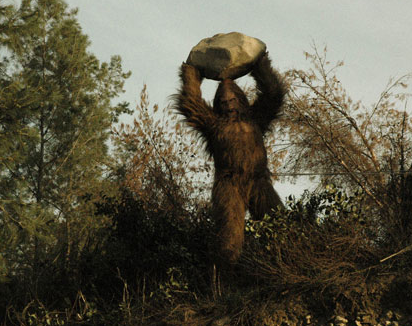 You already had the beef jerky, Harvey, But NOOOO, you had to taunt him, didn't you? You had to say, "Thirteen National Championships and 22 SEC Titles AND THE TASTY JACK LINKS BEEF JERKY! Wait, I'll give you some, Lee County Sasquatch. No, I promise I will!" And maybe because you live in a van down by the river without a TV you don't know how this works, but we'll help you out: when you offer the beef jerky and instead spray him in the face with a shaken up Mountain Dew, it ends up with you knocked out with a rock because Sasquatch DON'T TAKE THE MESSIN' WITH, HARVEY.

Go ahead and spray him with Spike 80DF. It'll just aggravate his asthma, and that's what kept him from playing college football because it's hard to run a flag route out of the TE slot when you can't breathe, even if you are a five star recruit with offers from 22 major college football programs. That'll make him think about how his Dad only loved him for his football skills, Harvey, and that's what gets you knocked out in the parking lot, Grim Treeper, because that's still a very sore spot for him especially because "Enchanted Woodsmancreature" doesn't exactly please the 'rents who wanted you to go get a health management degree, okay?

(You better hope it's Sasquatch who knocked out Harvey Updyke. Otherwise this just broke crazy's parameters and is streaming into neighboring words who had nothing to do with it. Fortunately, Alabama already has a society to deal with a Sasquatch issue. Do not let your girlfriend look at its leader or you will LOSE YOUR GIRLFRIEND TO HIS CHARMS.)