IT'S 4/20 AND YES LET'S RECOGNIZE THIS AUSPICIOUS DAY

Share All sharing options for: IT'S 4/20 AND YES LET'S RECOGNIZE THIS AUSPICIOUS DAY

If Jack Arute knows what day it is, then we can only assume the rest of the world has now accepted 4/20 as an unofficial holiday. If this is not the logical conclusion, then we must assume Arute is Musburger's weed man, and has been for thirty years, thus explaining why they're always teamed up and also why Arute and Musburger say so chill on their often exciting broadcasts of college football games. (Also see "Dr. Jerry Punch.")

Athletes have long used marijuana as a form of stress relief, analgesic, and coping tool for living in places like Utah, South Carolina, Florida, and Indiana. In the case of legendary Florida basketball player Jason Williams, he used it because he liked failing drug tests. Edit: because he loved failing drug tests. Jason Williams was allegedly told he was going to be given his final drug test after something like ten positives and warnings at Florida. Unfortunately, he was high at the time of the warning, and failed his drug test. He went on to make millions of dollars playing professional basketball and is a wealthy, successful person today. Let this be a cautionary tale for you all.

They learned their craft somewhere, however, and most of them learned it feeding on the nourishing intoxicant broth produced by the kitchens of the NCAA's member institutions and the surrounding communities who shockingly refuse to stop selling drugs to the students who use their towns like Bangkok flophouses for four, five, and sometimes seven year increments.

Let's start to review the finest stoner elements of college football. Then let's forget what we were doing, turn on the television, find our DVD of How High?, and order far too much pizza for our own good.

HIGHEST CAMPUS.  Appalachian State. They sell marijuana in mason jars and have many talented ag majors, and if you visit you will get high. It may even happen by accident. Michigan can excuse their loss to the Mountaineers due to contact THC highs attained while grappling with App State players. Not that they smoke weed; they just live in Boone, and therefore have a standing level of the stuff in their bloodstream that would incapacitate the average person. (See this picture? That's not fireworks smoke.)

MASCOT:  UAB's Blazer may be the most apropos by name, but Oski. SERIOUSLY OSKI LOOK THEY KNOW. 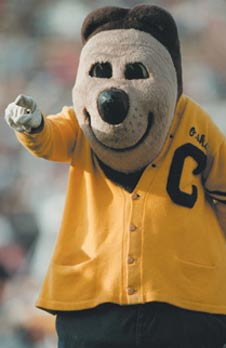 "Shit! Where's my Visine?" Notice you don't see him a whole lot on the sidelines. This is because he has forgotten what he was doing, and is at the snack bar waiting on his order, which did he get nachos sure put 'em on here I'll carry it all it's cool.

The Western Michigan Bronco is a worthy runner-up. 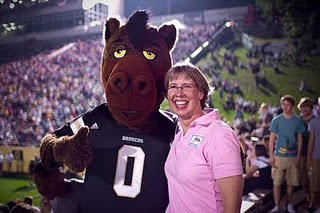 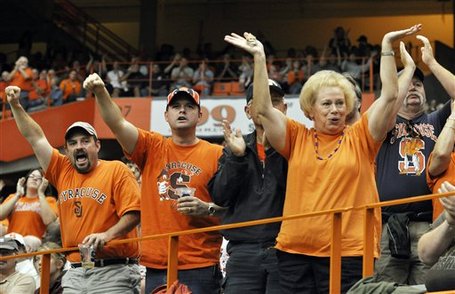 "WHAT I WANT MOST IN THE WORLD RIGHT NOW IS A PAPASAN CHAIR."

EASIEST SONG FOR THE LIFTED AND OTHERWISE OVERLY RELAXED. "Boomer Sooner" because it's mostly enthusiastically chanted gibberish but with "Rocky Top" a close second right behind it since it's about a hallucinated episode of bestiality, killing someone from the meddlin' government, man, and what a bitch it is to pay your bills, man.

BEST PLAY: The middle screen, a.k.a. "smoke" in some systems' terminology.

BEST LEAGUE TO WATCH: The WAC. Come for the scoring that keeps an addled brain awake, but stay for the games that go until one or two in the morning. (Also, giggling at the name, which you will.)

BEST POSITION FOR A STONER: Whatever Percy Harvin called himself, or failing that something else equivalent to "Terrorback Too Good To Drug Test."

LEGENDARY COLLEGE FOOTBALL FIGURE WHO GOT DOWN, OR WHO SHOULD HAVE WITH THAT HAIR.

COLLEGE FOOTBALL PLAY MOST ADORED BY STONERS.  Not even really a question, is it?