PAUL RHOADS IS SO PROUD TO BE PUNCHING THIS MOOSE RIGHT NOW.  Sure, Paul Rhoads gets the glory line and the iconic moose-punching gesture in the video from Iowa State's group trivia night "Cy's House of Trivia." He should. He's the coach, and thus the Clark Griswold of the program. Take the big steak, daddy.

Please do not neglect the amazing acting done by #22 Ter'Ran Benton, though. 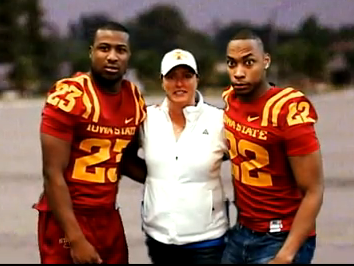 When you have no lines and you still steal a scene, your chops are undeniable and your credit is unlimited. Move around the room a little bit, and notice how his eyes follow you wherever you go. Eerie doesn't begin to cover it. A gif of Paul Rhoads punching the moose follows after the jump at the bottom. You'll want to just open it and stare at it for an hour or two. (Via.)

NICE DRUMSTICK TWIRL. Cocky playing the drums will be recut to some other song. We just have to decide which one, though an early leader is a Ke$ha song of some sort. Maybe one where she talks about being KRAZ33 and TAK1NG HR CLOTHEZ OFF OH GOD NO WE DIDN'T MEAN IT---

90 MINUTES FROM CAMPUS AND NOT TECHNICALLY IN MID-AMERICA? SIGN THEM UP.  The MAC will likely admit UMass as a member of the MAC because WE HAVE NO IDEA WHY. (Because it's educational? Record store clerk from 1992, pump your fists! You got the joke! Now go listen to Neutral Milk Hotel on vinyl and bitch about the kids coming up from behind.)

Their stadium is going to be 90 miles from their campus. They are currently a 1-AA football team (albeit a pretty good one, with three conference titles and three NCAA tournament berths in the past decade.)  They play college football in a part of the country that does not care about college football. They do not have a mascot who looks like a misbegotten lab experiment on the lam. UMass fans' fondness for chicken wings and bland food remains likely but unverified. This does not a MAC team make, but whatever, crazy era where we can just slap teams into any conference we like. Liverpool to the SEC! Come on over, y'all!"

They will even the MAC up to 14 teams, something Hustle Belt envisions in their welcome post to UMass, thus avoiding some of the "unique scheduling quirks" the MAC has had to juggle in past years.

JIM TRESSEL IS EXPENSIVE. Hinton's still with us on thinking that Tressel is fine until he's actually out the door and taking off his sweatervest and burning it in the parking lot. (He also notes that defending Tressel is a great expense to OSU, but when you ball hard like Gene Smith and the Buckeye athletic apparatus, them's small nickels.) Something in Tressel's deep-seated Midwestern-ness has him getting naked and peeing in an office houseplant following any dismissal. Then he is escorted out of the office by security and given an Ohio State jersey for modesty. It would be a Craig Krenzel jersey, and as Tressel notices this, he weeps. FIN.

AUBURN, DEER ANTLERS, AND REAL SCIENCE THAT WORKS. Auburn's Zac Etheridge plus "As Seen On TV" store = BANKRUPTCY. Are you a reader who wears a power band? Do not admit this. You do not exist, and should go throw that away and come back when you have discarded it and forgotten you ever bought it.  Reader BurritoBrosShit suggested last night that we begin selling holographic cock rings and claim extraordinary things about their benefits. We cannot wait to start selling "C.R.O.M.P.T.O.Ns," coming soon to an adult novelty store near you. (Cock Rings Of Massive Power Taking Over Nations!)

ALABAMA KICKS OFF ITS CRIMSON CARAVAN. The spring barnstorming has begun, and besides the interesting notes about Bama's lack of a clear starting left tackle (sort of important,) is the opportunity to suggest he is short and that this is the car he drove from point A to point B on this tour. #becausehesshort #andinsanelywealthyandsuccessful

LEAAAAAAACH. On Twitter, for real, and thus far the author of two tweets! He has a book coming out, so count on at least one more tweet at least announcing the release of the book, and then one more from an inadvertent butt-tweet from when he leaves it on in his back pocket with the Twitter app open.

Punching Paul Rhoads, after the jump.