The Fulmer Cupdate is as short as our Boardmaster Brian's scoreboard-generating uberdong. The Dubai'i government once tried to buy it and could only afford a third of it, breaking the record previously held for virtual dong sales by Reggie Nelson and an attempted Qatari takeover. Here is the board; corrections and scores follow. 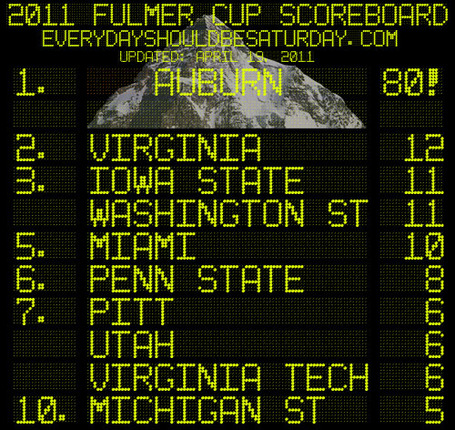 None of this week's scores made the five point threshold for the Big Board, but first an important clarification and reminder.

THE FULMER CUP DOES NOT APPLY TO RECRUITS. It never has, and never will. BUT BUT BUT BUT UGA AND LOCKER ROOMS AND UH UH UH UH--No. The answer is no. The only ceremonial points ever awarded in a substantial manner to anyone came in the Damon Evans case, and seriously that was the AD of a school getting caught be-pantied in a car too drunk to drive or lie effectively about what he was doing. That is clearly a special case, and if we're going to award recruits then we have to award all of them, and then retract the points when their scholarships are revoked, and count guys who are committed, and THAT WAY LIES CHAOS MY FRIENDS.

So no, it does not count, and never will. This universe requires rules lest there be too much madness. This judgment is final and should be read in the voice of a very ticked-off British policemen seconds away from hitting you with a truncheon for interrupting his tea time. Actual scores are after the jump.

OREGON FINALLY MAKES THE BOARD. After a hectic couple of years Oregon has had a slow start in the Fulmer Cup, though booming bass does net them three points after backup quarterback Dustin Haines was first reported for a noise ordinance, then got belligerent with the police, and was then pepper sprayed and charged with a noise violation, resisting arrest, and interfering with the police (a charge he got for attempting to shut the door on police when they responded.)  Each is a misdemeanor, and therefore nets Oregon three points for the entire affair.

The Ducks now have at least one quarterback who is pepper-spray tested and can therefore start against LSU if needed in their opener against the Tigers and if LSU fans decide to get a bit testy in the stands. Since the game is at the Jerrydome, pepper spray will be the first level of response, followed by actual fire and then snipers opening fire from the lights.

BOISE SHOULD PROBABLY MEET OUR FRIEND CHERYL TUNT.  John Nisby, senior defensive tackle, choked a man in an argument in Boise, and that will get you misdemeanor battery and the numbers of some of Boise's most sexually disturbed individuals at the same time. One point for the Broncos, and quite possibly an immeasurable bonus for the wild side of Bisby's personal life off-campus. (EDSBS DOES NOT ENDORSE DANGEROUS SEXUAL PRACTICES.) (but does point and laugh at them.)

ARKANSAS BE ON IT ALL DAY. Purple ribbon, ho!

When the officer reached the car, Rasner rolled down the window. The officer then smelled the "odor of marijuana emitting from the vehicle," according to the report. A search of the vehicle produced some "marijuana wrapped in a paper towel" and a "purple Crown Royal bag with an opened bottle" approximately "3/4 full of whiskey."

Arkansas linebacker Ross Rasner has been suspended from the team in the Petrino County Court System, but the less offensively innovative courts of Washington County, Arkansas have charged him with minor in possession and weed holdin', two misdemeanors that will get you two points in basic scoring but the heralded and newly invented FRANKIE HAMMOND PURPLE RIBBON ALL-STARS CROWN ROYAL GOODIE MOB/ANTWAN PATTON BONUS GET UP AND REP YOUR CITY---

Three points total to Arkansas, where John Daly is mentoring Ryan Mallett and wait that's not a good idea---