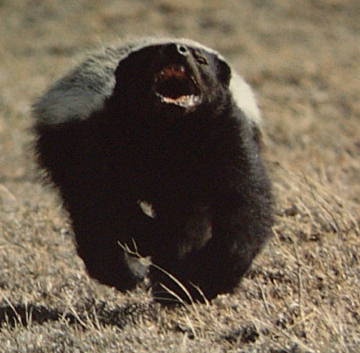 When Time did it the winner was "YOU," but with the shitty reflective mirror cover "YOU" looked more like "PICASSO YOU," and being overpriced with a nose where your eye should be while being chased by a randy minotaur is not our idea of paying a compliment to our readership. If you do like being chased by randy minotaurs, well, Ed Orgeron is currently the recruiting coordinator at the University of Southern California. Do your best.

EDSBS readers deserve more than that. You deserve your true mirror image: a honey badger, churning relentlessly across the Serengeti in search of anything that dares fight you. You'll even turn it into charity in the name of gouging a rival, since as of noon today the collected EDSBS commentariat has raised $21,566.53 for Refugee Resettlement and Immigration Services of Atlanta.That's quality honeybadgering away in the name of charity, especially you, Person Who Actually Donated $3.02 in the name of the "Baby I'm Burning" game.

Late edit: An Auburn contributor just dropped $1716 for the "Punt, Bama, Punt" Game. That gap just got much, much narrower. And frankly, since the final tallies will be done on Sunday, donations will be counted through the weekend. So be leisurely about it and we'll see you on Monday.

The competition ends at 11:59 p.m. tonight. A late push by one school outpaced all others with the ease of Denard Robinson jetting away from hapless linebackers. The full results are:

Total from the week so far – top 7

That's a huge deficit to make up between Michigan and the rest of the field, but note that Alabama, Auburn, UGA, and even Florida (DAMMIT PEOPLE) are right there tied neck and neck, and still very much up for grabs. Continue donating, and we may just turn next week into a rotating series of themed days for our top contributors. (Also, taking ideas for a Michigan-themed or otherwise allusive tattoo.)

Most importantly, thank you from the bottom of our black hearts. The words are inadequate, but they will have to do for the moment, because they and humorous random pictures are all we have to express our gratitude. 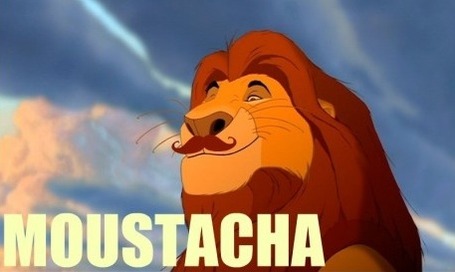 And now, to the Digital Viking:

Holly: Have you sampled the fine wares Firefly Sweet Tea Vodka has to offer, and thought, "What I really want out of my drinking life is a product that purports to be sweet tea vodka but actually contains no discernible vodka or tea of any sort!" For tailgate drunk, EDSBS recommends the Sakerlina stuff. For prison drunk, however, Hound Dog is where it's at. It even has a laughably overwrought origin story! [HT: Alert reader Luke]

Doug: Presentation counts in this category, and while Warsteiner is indeed a fine German beer, it's even finer when drunk from Das Boot. 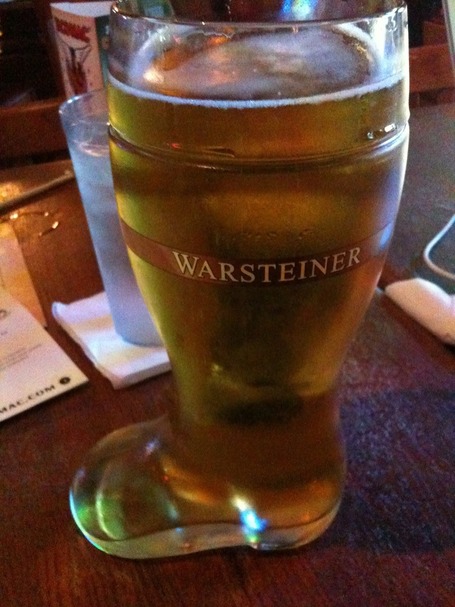 All in all, it makes a fine addition to both my Great Beers I Have Tried and Interestingly Shaped Objects From Which I Have Consumed Them lists. The only thing that would make it better is if were presented to me by a busty serving wench . . . which, now that I think about it, this kind of was. [I bought it for him as repayment for sitting through West Virginia-Marshall '10 with me. SCREW YOU, BILL STEWART. SCREW YOU RIGHT OUT OF YOUR ILL-GOTTEN JOB THAT YOU ARE SO BAD AT. --H.]

Orson: The Beitzah. Passover has to be sober, but it doesn't have to be sober, nahmean? (Ghostface Killa: secret Jew.) The Sippin' Seder has six themed cocktails to accompany the holy day, each reflecting the six traditional place settings of a Seder, and each surprisingly palatable despite representing things like shank and bitter herbs. The most interesting one is the Beitzah, a takeoff on the Spencer or other egg white frothtails that we like for its ingenuity and because it as bourbon in it. (Same reasons we like Barry Switzer, too.) Remember that the Jews are the only major religion with a holiday where getting hammered isn't a suggestion, but a demand. Shalom! [hic]

Orson: Real talk time. I'm not really big into the concept of "Southern Cuisine." Oh, there's foods I'd kill for that are by definition "Southern": the various sects of the Church of Barbecue (don't get trenchant, we're universalists), fried chicken, fried anything, any offshoot of the Louisiana culinary mafia...all of it, worth a good stabbing or two.

But "Southern Food" can just sometimes be code for steam-tray crap that's had the daylights fried or boiled out of it, and is in fact British food in disguise with hot sauce on the table. This is especially true of vegetables, a heinous category of food that by necessity I've had to eat lately due to a recent anti-fatness campaign. So when we find a way to do vegetables in a tolerable way, we do the shit out of said way. 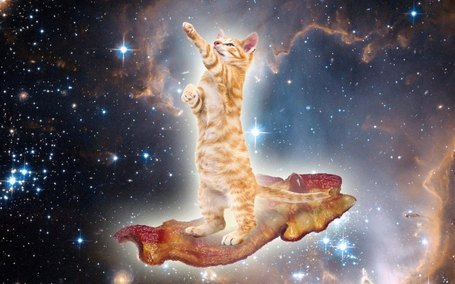 That is less of a recipe and more of a visual description of the taste these leave in your mouth. Really, any way you fix Brussel Sprouts with even a smidge of pig platinum is enough to tinge the entire batch with it, and thus make sad veggies fulsome and content with meaty goodness. Add this into Brussel Sprouts' texture--not unlike eating whole old-school rubber band-encased golf balls boiled down--and it's a mansome, hard-chewing experience.

Holly: Sauced is an Atlanta-based restaurant, discovered by our own TCOAN, that (among many other genial talents) will deep-fry pork rinds to order for you at the bar. We do not even like pork rinds, and we killed about a mixing bowl full between the four of us.

Doug: Every few months, usually courtesy of Holly's RSS reader, I'll get notification of some new horribawesome dish that Denny's has introduced. First it was the Fried Cheese Melt, basically a grilled cheese sandwich with fried mozzarella sticks cooked in, whose mere existence predictably drove Fearless Leader to the brink of madness. Then after that it was Pancake Puppies, i.e. hush puppies made with pancake batter. And most recently it was the Maple Bacon Sundae, which is exactly what it sounds like -- vanilla ice cream doused with maple syrup and bacon. 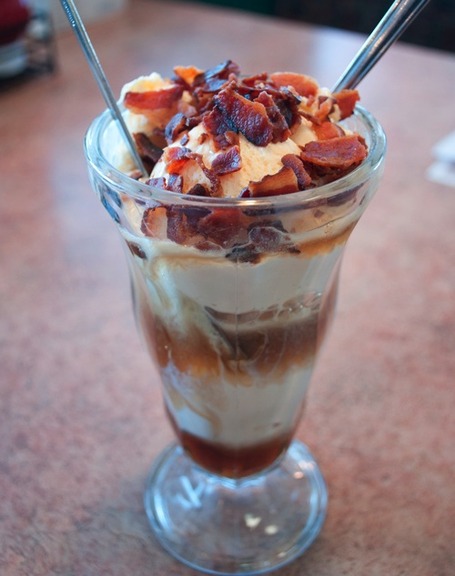 I dragged a bunch of my co-workers to Denny's in the firm belief that bacon can improve any foodstuff on earth, even ice cream. Only one other person in our group was brave enough to try it, but a few days later we bought the ingredients and made a batch ourselves at the office, and damned if it didn't find near-unanimous approval from our panel of taste-testers. (The only people who didn't give it passing grades were from the IT department, and well, we know how those people can be.) I'm telling y'all, bacon and ice cream -- vanilla or chocolate -- is a winning combination. And I give major ups to Denny's for fearlessly pushing the bacon envelope.

Holly: Smith & Wesson .500 Magnum ammunition. ½ inch across, over an ounce of lead thrown at 900 to 1,400 miles per hour.  Develops 50,000 psi at ignition.  Any wider, and the load would be considered as a "Destructive Device" and regulated like explosives. Makes a great stocking stuffer!
[HT: Alert reader DHIWAG.]

Doug: At first glance, the following video might seem an odd way to explain Japan's ongoing nuclear emergency to kids, but then this is the same country that brought the world Everyone Poops, so on the other hand perhaps not. Ladies and gentlemen, meet "Nuclear Boy":

Orson: I don't even have a picture for this, but in the early 20th century there was a brand of rat poison with a very high arsenic content whose brand name was "RAT DYNAMITE." Somehow we will work this title into the nickname of a 2011 defense and/or defender who is undersized, deadly, and may be criminally insane.

In lieu of a picture of the label, here is a diagram of a 1940s WW2 era "rat bomb" conceived by the British.

The British war effort was run by the brave who did the fighting, and the syphilitic and mad who did the planning. This came from one of those two groups. Guess which one!

Orson: "Honey, I don't want to sell my vintage Mustang just because we have a kid."

"We have to buy a station wagon. I'm sorry."

"That's where you're wrong!" 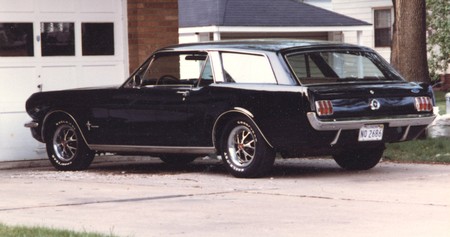 If a car could be Steve McQueen jumping the fence in The Great Escape, but with a very much occupied Baby Bjorn on and a skim latte in his hand? That would be this car.

Holly: Here is the ZiL-29061, which drives on huge screws, rather than wheels or tracks.

[HT: Jalopnik and Alert reader Ed, who adds, "If you have to ask, it's Russian."]

Doug: They say you can live in your car, but you can't drive your house. But what if you turn your car into one? Last year BBC's "Top Gear" aimed to find out, hence this week's Transit is a tie between Jeremy Clarkson's Citroën Safari three-story condo, Richard Hammond's Land Rover 110 cottage, and James May's Lotus Excel, uh . . . whatever the hell that is.

When I write my novel and earn fuck-you money, I'm going to buy a Cadillac Escalade and convert it into a two-story Cape Cod. Haters to the left.

Holly: "They show extraordinary intelligence, even problem-solving. Especially the big one. We bred eight originally, but when she came in she took over the pride and killed all but two of the others. That one... when she looks at you, you can tell she's working things out."

"The point is... you are alive when they start to eat you. So you know... try to show a little respect."

We were 11 the summer Jurassic Park came out, and clever girl camp took our whole class to Atlanta to see it in some fancy multiplex with brand-new surround sound. There are worse role models for a young lady at that age than an alpha female velociraptor.

Doug: Before Michael Caine was a kindly old sage dispensing world-weary advice in movies like "The Dark Knight" and "Inception," he was a gun-toting badass, and few of his characters were gun-totinger or badder-assed than the title character in 1971's "Get Carter." Imagine John Shaft as a Cockney in a Savile Row suit and you've pretty much grasped the essence of the character, though for the comparison to be completely accurate you've got to remove about 90 percent of Shaft's moral compass.

It's stuff like this that earned Caine a pass when he later appeared in crap like "Jaws: The Revenge." Once you've seen a dude take a prostitute into the woods, force her to undress at gunpoint, and then deliver a fatal dose of heroin so that his biggest gangland rival has to explain to the cops why there's a dead hooker on his property, you learn to be very careful how you criticize his choices.

Orson: "How I Became A Famous Novelist" is the funniest fucking book I've read this millenium. Please condition that superlative by noting that I read a lot of crap that's unintentionally funny for humor's sake: the Fiesta Bowl report, Bleacher Report, Rick Reilly (who I am convinced is actually Dad Boner's writers subcontracted as his content providers.)

But this is intentionally funny, like, LOL-level funny in a way that real, heartily cruel books are supposed to be funny about their topics, which in this case is The Modern Best-Selling Novel. (All caps necessary there.) Important lessons: Americans like dogs, intuitively trust foreign things (especially if they're Tuscan,) want men who are mysterious because otherwise "why didn't they date me sooner," and buy books that tell them exactly what they want to hear about everything in life.

Throw in a truly horrendous drunken wedding performance scene worthy of the chase sequence in The Gingerbread Man, and even the slightly redemptive (Boooooo!) ending is more than forgivable in light of the evil fun of the first 300 pages.