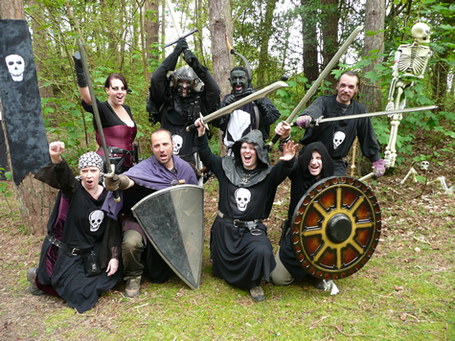 Northwestern and Notre Dame have agreed to roll the bones and work on some swordplay in 2014 and 2018, renewing a rivalry(ish) (thing) (?) they have not revisited since their last meeting in 1995. No mixing genres, and say the words Yu-Gi-Oh and we'll call this whole thing off, y'all.

AWWW WELCOME BACK NORM AND HIS NEW FRIEND FROSTY THE FAKE FOOT. Yes, we're joking about Iowa defensive coordinator's new prosthetic foot, but so is he.

O'Keefe said there was one day earlier in spring practice where it was especially chilly outside and he mentioned to Parker that it had gotten a bit nippy outside.

Parker had his right foot amputated this past fall due to complications from diabetes, and will call defenses from the booth because he's afraid he can't get out of the way on the sideline. We salute your astonishing toughness, and hope you do something cool like put a tiny fishtank in the prosthetic leg. (We'd take it off and throw it at players not paying attention in film sessions, but you know how sensitive kids are today.) Welcome back, Norm.

PAT DYE'S PANTS NEVER SLEEP. The bottom of Lake Martin: more colorful than one might realize. In other War Eagle-ish news, Chaz Ramsey will meet with the NCAA without Auburn's lawyers present, and the Patchwork Pat Dye includes Pat Dye's lessons on sex before football.

"Hell, it didn’t effect the way he played. It was helping him for all I know. If he was breaking rules, I never heard about it. And it ain’t against the rules to screw a gal, as long as they givin’ it up. I’m sure there were a lot of takers over there. I’m not talking about takin’ it physically, but if they were offering it up, he’d probably take it."

CROPDUSTIN' SOOOOOOWEEEEEE. Load the tanks with beer and buzz the parking lot. If you're a real fan, that is. Are we concerned with Razorback fans possessing the necessary tools to spray liquid plague all over a stadium full of people? NO NOT AT ALL. /shivers /weeps

GO READ THE OCTONION. The only truly respectful way to laugh at the Big East, as always, is their Justice League comic strip alternate universe as imagined by TNIAAM.

THE THRILL OF WATCHING AL GOLDEN STIFF JACORY HARRIS HIGH-FIVES ALL DAY LONG. It'll just be one show, but Miami would not be the team we'd want to watch a Hard Knocks show about for an entire season.