OH THIS IS NOT AT ALL A GOOD CALL. 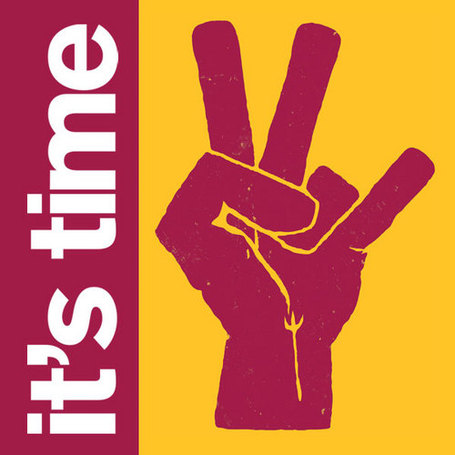 Is this the first time a school has made a specific sexual offer/threat its promotional slogan for the year? "All In" had a kind of lewd edge to it, sure, but it was a stretch, not a demand with a specific diagram attached. We know it is your symbol, ASU. We know it endures the passing giggles and sniggering from those of use who associate it with The Shocker, or at least you better assume it does, but there is a cycle going on here.

The new unis themselves aren't that bad. As a Florida fan who likes Oregon's uniforms, we consider ourselves to be experts on eye-rape through uniform, and they are not it. The black helmets are a nod to the Sun Devil teams of the 1950s who wore black helmets, and the gold helmets are another nod to the teams of the 1960s, and the three-pronged fork across the side of the helmet is a tribute to the state's large retiree population and their passion for shrimp cocktail. All of this except the last completely fictional note comes from this video, where Arizona State is introduced like John Cena at Wrestlemania. (Contains Pat Tillman; will therefore increase your virtue and testosterone upon viewing.)

It's better than any of the previous branding they've done, and if you disagree we point you to this image. (Have a seat.)

NAWT A DORITO. Michael Felder, who actually played big boy football unlike most of us, has his thoughts on the NCAA's warnings about draft parties. Touch nawt a Dorito without paying for it, because remember: parking tickets will get you prison, while murder is totally cool. This analogy will be referred to as the Nearsighted Meter Maid rule from now on, even if the term Meter Maid is sexist and offensive to the fine city workers of every city in America. Regardless of gender, you are all Parking Bitches and will like being called this. #hastickets

ALABAMA IS A STATE IN THE PSYCHOLOGICAL AND GEOGRAPHIC SENSE. Further explanation of the Brent Calloway recruitment seems to put the onus for Calloway turning to Alabama in his recruitment on the pushiness of his high school coach who lobbied hard for Auburn. We cannot wait for the sting operation run by one Rivals site where they place a tub of money outside either Auburn or Alabama's locker room, put a sign that says "FREE BOOSTER MUNNY" on it, and then wait with digital camera for the magic to transpire.*

*It'll be in ones and Skoal bucks.

HAHAHAHA LET'S LET THE BCS INVESTIGATE YOUR ETHICS. The BCS, which like something called Purdue does not exist, is going to commission an imaginary task force to not look into the Fiesta Bowl's Internal Inquiry. Somehow this will end up with them placing Bob Stoops in a situation where he looks bad. We don't know how, but that's what the BCS would do if they existed, since that is one of their few defined powers besides

AND YOU GET A MEINEKE CAR CARE BOWL AND YOU GET A BELK'S BOWL-- The Meineke Car Care Bowl has moved to Texas while the Charlotte Bowl will be called the Belk's Bowl, and we're quite excited about it since that means all the marching bands will have to play the soundtrack of every endless Belk's shopping trip. Someone call dibs on "Captain of Her Heart" by Double before it goes, as well as Ambrosia's "That's How Much I Feel." Chillest bowl game EVER, and everyone gets corduroy pants!

THEME SONG GREATNESS. We're on the BHGP podcast talking about wrestling, but please, go just for the new theme song.