Share All sharing options for: FULMER CUPDATE: MARSHALL STEPS IN, AUBURN GETS BORED

The Big Board this week has been baked fresh in the hottest of pizza ovens by boardmaster Brian, and was then delivered when he catapulted it to us all with his Reggie Nelson-ish member. 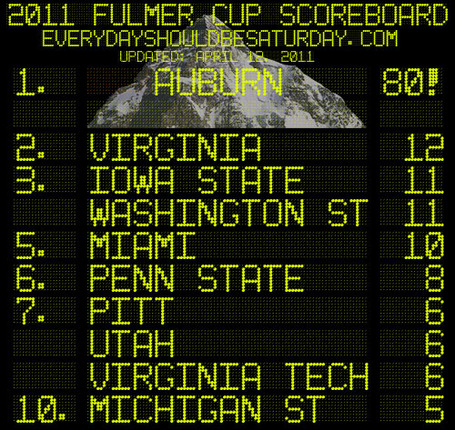 AUBURN'S LEAD GROWS, WHICH IS JUST WHAT THEY NEEDED. Auburn's insurmountable lead on the Big Board grew this week, though not through anything they did. UVA football players involved in the fight earlier this year--the one placing the Cavaliers in what passed for an impressive lead at the time--have had their charges reduced or dropped. This leads to a reduction in points but not a complete dismissal, since plea bargains and charge reductions do not apply to Fulmer Cup scoring but dropped charges do. Why do reductions not count, you ask? Because it is extremely pesky to keep up with them, that's why, and in almost all instances doesn't change the impact of what they admitted to doing.

Six points vanish from the annals for UVA with the dismissal of charges for Ausar Walcott, thus reducing the total score to 12 points for the Cavaliers, and putting an even more astonishing gulf between Auburn and the rest of the Fulmer Cupping world.

MARSHALL, AS IS THEIR CUSTOM, CHECKS IN. At three points it is a meager score in comparison to some of the giants walking the board right now, but Marshall does continue its annual contribution streak with a domestic battery and concealed weapon charge from linebacker Brian Robinson. The bonus for hitting girls kicks in to take Marshall to three points in the Fulmer Cup, a sum leaving them only 77 points shy of catching Auburn. Never surrender!

THESE POINTS REALLY SHOULD GO TO GEORGIA. They won't, but they should.