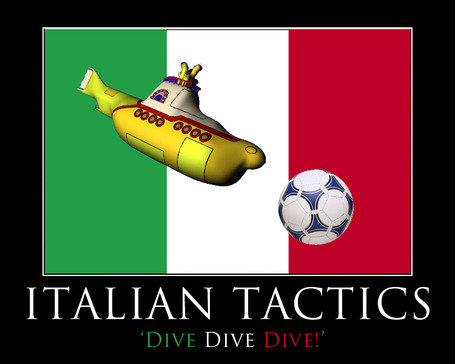 Vitamin Addazio is the most horrifying phrase we've read in weeks but this long profile of his first spring at Temple does bring the lulz in one respect:

"There are a lot of great coordinators who don't have the skill-set to be a great head coach," Addazio said. "I've seen it. Really, if you want to be a college football coach, you need to have been one of the top recruiters - because if you're a good recruiter, you're a good communicator."

We hope Addazio is the reverse, a terrible coordinator who has the skill set to be a great head coach, since he is a superb motivator, recruiter, and offensive line coach. Don't ever touch our offense again. Please.

ANDRE DEBOSE REHABS STYLISHLY. The hipster specs meet Dwayne Wayne in the form of Andre Debose. We are slightly envious both of the style, and of the ability to wear sunglasses without looking like an Danish alt-porn director. (Damn you, gigantic Scandinavian head and moon-sized face.)

WHAT WE NEED IS A CROSS BETWEEN TODD BOECKMAN, KENT GRAHAM, AND [angel's chorus] CRAIG KRENZEL. Somewhere in Ohio, there is a man, a man in a red sweatshirt with a silver block O on it, and this morning he is thinking, quietly, very quietly, somewhere over a cup of low-grade coffee and some runny industrial-grade eggs at a mediocre diner, this man is reading a piece about Joe Bauserman, old-fashioned drop-back quarterback Joe Bauserman taking the reins at quarterback with the suspension of Terrelle Pryor, and he is thinking: finally we're getting back to Ohio State football.  Then he smiles, and has a glimmer of hope for this goddamned forsaken country with the kids and the wackos and victims, and decides not to shoot up the mall to show everyone what he thinks of all this. (Thanks, NCAA and Ohio State!)

EVIL RICHT LIVES. We have a feeling Evil Richt is behind this, that it is a motivational ploy, and that Georgia will be fairly good this year as a result of the return of Richt's goateed alter-ego. When Aaron Murray's car turns up on fire one random night, you'll know we were right. Does this theory jibe with the recent injury to Trinton Sturdivant at all? Not at all, but your reality sucks and has nothing to do with ours.

YES IT IS A THING. Sun Belt expansion is real. Quick, do you want to be an AD? They are ready for your job applications when you are.

LET'S JUST ASSUME THAT THEY DO, THOUGH. You need a license to drive a truck, and you should have to have one to think out loud, but this is not the case with either thought, parenting, or calling yourself an expert. So if Jon Solomon writes a piece about the NCAA's anti-domestic violence campaign and say how good it is, then maybe we should figure out whether it's a problem more or less endemic to the population in question before calling it a necessary thing.

Let's be clear: We don't know that sports predisposes a person to violence.

Benedict returned this year with a Sports Illustrated story showing that 7 percent of college football players on 2010 preseason top-25 teams had been charged with a crime...

...and then talk about what good work this non-profit with a massive building in Indianapolis and a major television contract does on an issue which may or may not be more of an issue than it is with the general public. The NCAA can't define what it is or what it does, only that it definitely does things, and that those things sometimes seem like abstract good ideas. Can you tell we have worked in organizations with fuzzy mission statements where people just performed vague tasks while picking up paychecks? And that this is massively irritating to us, both because it defines logic and good economics, and because we would love to have a sweet bullshit job like NCAA administrator?

(To Solomon's credit, Rainey should have been suspended more than two games for threatening his girlfriend. Our theory remains that Rainey was massively concussed and displaying the kind of random rage and atypical aggression you see in some severe head injuries. This is no excuse for his actions, but it's context for how it happened, and a terrifying preview of some of the neurological issues he might have later. YAY FOOTBALL?)

IN FURTHER LOGICAL NEWS: That awesome draft party you were going to? Yeah, about that. You're not going. If college athletics were a city, it would be one where you got a parking ticket every day for nudging the white line in a metered space but could kill in broad daylight with impunity.

AND IN STILL MORE (OR ACTUALLY LESS) LOGICAL NEWS. Is Craig James right? Are we not obsessed enough with grit? Can this be measured via a series of physical challenges more daunting than the current gauntlet of tests? Can this be an excuse to have players put on an island for a week and hunted by trained professionals, with the winner receiving the highest draft rating?

ALABAMA PLAYERS INVOLVED IN MASSIVE THEFT RING! See, Paawwwwwl! They're doing it too! It ain't just us! And we wouldn't be this low, but you think it might come up in recruiting that a bunch a Bama players are out there with sheets, Pawwwwwwlll? WHAT DO YOU MEAN LOOK AT THE DATES? You know they can falsify those. You just write what you want to in there.

AND THIS IS NOT FUN. In further terrifying health news, sudden cardiac arrest strikes African-American athletes at almost three times the rate as other athletes.