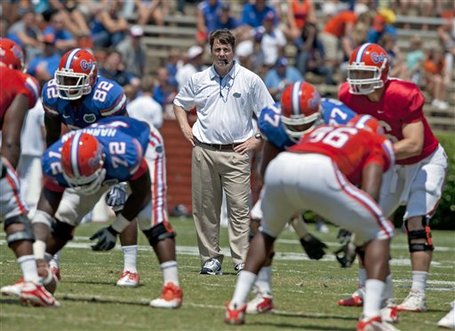 EXCUSES FOR WHY THIS LOOKED LIKE A HOT BAG OF BOILED RAT INNARDS. Before we type nasty things, grant the debut of brand BOOM! this: injuries decimated the roster this spring, and turned what could have been a grand opening into an awkward beta test. Mike Gillislee and Mack Brown were out with injuries at running back, Xavier Nixon, Matt Patchan, and Nick Alajajian were out along the line, and Messrs Burton, Howard, and Debose were dinged, as well. Janoris Jenkins is on the bench recuperating from shoulder surgery.There's a lot of bodies, and they won't be revived en masse until the summer sessions. All of this is granted.

AND NOW HORRENDOUS. The offense looked as it probably should have been expected to look, but expectation and seeing it with your own horrified eyeballs are two entirely different things.

All inferences taken from a spring game are conceited: all Sharrif Floyd and Dominique Easley destroying the interior of Florida's injury-bedgraggled offensive line is that they can run unmolested through the flailing blocks of a patchwork unit they face in practices, and that is it. John Brantley wings passes into the hands of that same line, and it is more than apparent that one can state that the Florida line is quite good at batting down passes from the hand of John Brantley and him alone. Your variables: they are limited and extremely weak in predicting anything.

That said, John Brantley may be the inverse Wuerffel of this era's Florida Gators if this pattern continues. Brantley has by all accounts had a solid to excellent spring, something you will just have to take the coaches at their word for since spring practice has been closed, and we're just all nodding along rather than seeing it from the sidelines. (Hate this. HAAAAAATE a closed practice, and purely for selfish reasons. Moving on.)

Wuerffel forever stank in practice and then became incandescent in the glow of real live game action, while Brantley seems to have adopted the reverse dynamic: excellent in practice, and then suddenly Crompton-esque when the lights come on and it's actual live-fire drills running around him. He went 4/14, had several passes batted down at the line, underthrew Quentin Dunbar on the first play of the game, and threw his passes directly to where his receivers were when he saw them first, not where they would be in the full motion of the route.

BUT YEAH: Only Jon Halapio looked like he knew what he was doing, though we can never tell whether he's actually dominating or if we're just watching his beautiful flowing Polynesian hair flow through the breeze. He certainly seemed to know whose ass to kick on Saturday, though he took a turn on the Floyd/Easley pain wagon, too.

The following words will cause explosive vomiting and cramping among the committed, but the outsider laughter should be rich enough to justify typing it: he may be Florida's Crompton, aka Swampton. If he holds on to the starting job through what will likely be a few miserable games at the start of the season, he may rebound as Crompton did in the second half of his senior season. If he doesn't, Tyler Murphy's the starter and no one blinks.

This is typed with as much respect toward's Brantley's toughness and decision to stay at Florida as is possible, but we may just be facing the ugly reality of him hitting his athletic ceiling in high school, getting signed as a top recruit, and then plateauing for four years of free education. That's okay: most people plateau at the age of 12 or so, or if you're like us, at the age of six. It happens in college sports all the time. (See: Jordan Jefferson.)

THE PLEASANT FLIP SIDE TO DOOMSAYING. Sharrif Floyd  has been weaponized, and will be deployed indiscriminately throughout the year in SEC venues. Floyd was heinous nasty on Saturday, and combined with Dominique Easley represents the best Gator defensive duo at tackle since 2006's combo of Marcus "Mists of Alachua" Thomas and Cohen/Estopinan/and Company. (Thomas did not make it through the season due to positive drug tests on a team where half of the roster was blazed 24/7. Thomas DID NOT HAVE HIS SHIT TOGETHER.)

Ronald Powell was relatively quiet, but combined with one lockdown corner in Jenkins, the rush up the middle and one half of the field secured means offensive options for opponents will be scanty and will have to happen very, very quickly.

ANYTHING OF ANY POSITIVITY WHATSOEVER ON THE OFFENSE: Rainey looked more than comfortable out of single and I-back positions, particularly on misdirections and other plays where he could cut and stutter-step defenders onto their heels.  Quentin Dunbar not only looks like the jump-ball receiver this offense demands, but he also runblocks like someone who enjoys hurting people and not because they deserve it. AC Leonard, as Alligator Army points out, is a massive target across the middle who could create some fun "runaway-truck-loose-between-the-hashes" scenarios. He might kill some bystanders when he ends up crashing into the front row, but glory has a price tag and we will pay it.

THIS IS ALL YOU MAY NEED TO KNOW IN A SINGLE LINE: DB Malcolm Jones led both teams in rushing. DB, as in defensive back. (Admittedly, he looked quite nice out of the backfield, but still.) 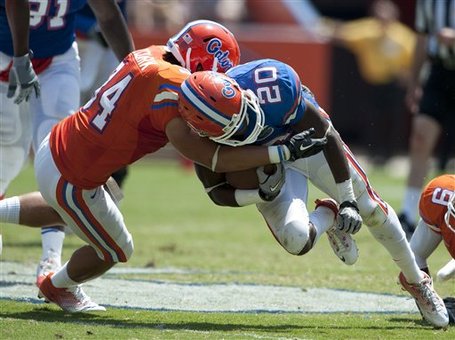 RE: MESSRS MURPHY AND DRISKEL. Murphy looked every bit like the two-star Meyer find: a bit undersized, nimble, and more than happy to boot, run, throw underneath, and otherwise do all the pesky things a runner with a B plus arm and solid on-field cognition does. He could be the starter, and indeed might, so prepare yourself for that eventuality, because Swampton's storyline remains to be seen but certainly includes this possibility

Driskel looked exactly like what you expect he would: physically brilliant, still field-myopic when it comes to seeing things unfold at speed, and capable of drilling the ball through the side of an APC.

COCKFINGERS STRIKES AGAIN. Deonte Thompson dropped a reverse for a fumble. There is no safe way to give the ball to the be-cockfingered, and never will be.

REBUILDING SWAG! Kyle Christy booted a 57 yard punt and looked more than competent in limited duty, and that's cool because we will need him, and need him BAD. If we have back-to-back Ray Guy Award winners, that's nice for you, punterguy, and horrendous for what it could mean for our offense.

DOES THIS MEAN ANYTHING: Likely little, though we think the solid takeaways will hold out over time:

The rest is muddled. Weis and Muschamp both showed very little in the way of playcalling, though one surprising comparison we found ourselves making in the course of the game was the similarity of Weis' general playcalling vibe to Spurrier's: basic run game dependent on the pass working, downfield passing, and cutesiness alternately making you want to hug and strangle him at the same time. 2011 is probably going to have a lot of strangling, and not the affectionate kind either, but this is one half-assed scrimmage, and one played with something like eight full-bodied offensive linemen. The Fat Man is granted some small amount of leeway.

IN SUM: Muschamp's only failures to this point are not controlling the fragile tissues of his players with his mind and a failure of the imagination in the marketing department. If this is a debut for a first date, he showed up to the door with toothpaste on his mouth, an untucked shirt, and one shoe on, which if you just imagined it is probably exactly how he actually does answer the door, albeit with a white board covered in X's and O's in his hand and a chunk of dip in his mouth.