YES THERE WERE MANY SPRING GAMES. We will be doing a full spring game roundup, so the CI this morning is really just "things that happened elsewhere not directly involving actual spring football." We do want to mention this from the Florida spring game. 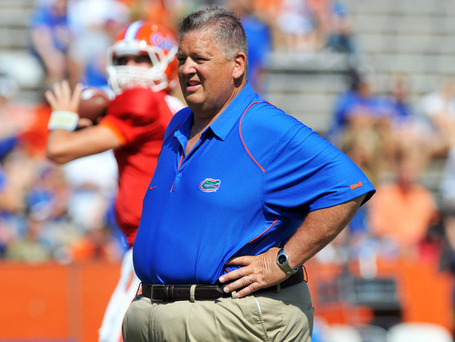 We didn't think he'd actually be calling things from the sideline, and dearly hope he won't be doing this in the fall because 90% of on-field playcalling suuuuuucks, but we really feared for him in his first Saturday out in the heat of the Swamp. Some schools have already confronted this solution, and their solutions, if primitive, are effective and worthy of adoption.

There was also some statue unveiling, another thing the EDSBS policy manual frowns on since we prefer a more Spartan approach to victory, defeat, and memory. (Like, ideally, outside the Swamp there should just be a gigantic fire-belching gator skull we worship collectively prior to games.) The Tim Tebow one is not throwing, and should not be just like the John Brantley statue we will eventually erect that shows him holding a clipboard.

WAIT, HE HAS A SON? Travis Haney educates you on the Garcia situation, and informs you that the Brah-min himself has a four year old son. If dad being drunk at a meeting is an indication of relation, then HEY BRAH WE'RE BRAHS, LITTLE BRAH.

THE AUBURN RIVALS BOARD STANDS BY ITS SOURCES, WHICH ARE NODDING BACK AT THEM IN THE MIRROR. Alabama finds nothing to the allegations of impropriety surrounding the recruitment of Phil Calloway, but let's not be too suspicious of an internal investigation conducted by the school accused of wrongdoing. Let's be suspicious of everyone concerned, assume they're totally full of shit, and believe nothing they say, because this is the state of Alabama, where the mere mention of recruiting sends everyone in a belligerent fugue state they may not emerge from for weeks or months at a time.

LET'S PUT THIS OFF ANOTHER WEEK SO WE CAN PITCH NOTRE DAME HAHAHA JUST KIDDING WE'D RATHER HAVE 'NOVA. The vote on Big East football membership was postponed by the Villanova board of trustees due to concerns over 'Nova's tiny stadium. Even after expansion it would seat a meager 30,000 people, and that's more than have shown up to Syracuse in years but whatever.

PHIL STEELE CONTINUES TO COMPUTE WHETHER YOU UNPLUG HIM OR NOT. And his numbers from the YPP category for 2010 will make TCU's defeat of Wisconsin in the Rose Bowl look even weirder in retrospect.

IT'S ALWAYS SUNNY IN WILLSTEINADELPHIA. Will Stein makes everything better, and puts the LOL in MiLOLion DoLOLar Baby.

THEY FIT RIGHT IN. This all makes too much sense, really.