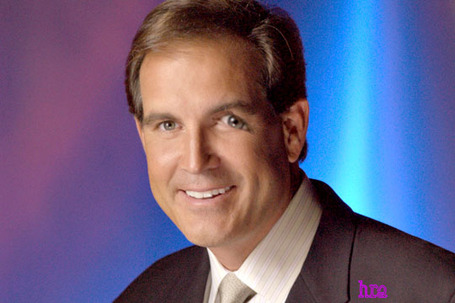 Jim Nantz is the best announcer ever. He calls every game with dignity and pride like all sports deserve. Some guys call the game with too much "color." Like that guy Gus Johnson, for instance. Do you have to yell so loud? I can't see the game over all the noise when Gus calls a game, with all that excitement. I don't even understand what he's saying half the time. Hey, Gus: turn down the gang slang and harangue and learn how a real pro calls the game.

Remember the chills you got when you heard Nantz make this immortal call in 2006?

Florida takes its place in history, back-to-back and unforgettable!

How does he do it? I don't know. I guess that is why he is a professional. Jim just calls it like he sees it because he doesn't need to get all excited and go crazy. Sometimes it's almost like poetry when Nantz is calling a game. Like this:

Picked off. Look out! Gets past Manning. And it's Tracy Porter taking it all the way! Touchdown New Orleans!"

So lyrical, and so subtle. When I listen to Jim Nantz it is like feeling the well-crafted touch of a Men's Wearhouse suit on my shoulders. He is a cold Bud Light at the 19th hole. He is so much more than a voice: it is like you can hear values just pouring into your ear as he talks. I'm sorry. If you don't like him or the Masters, you're just not American. I hate to tell you that, but someone just had to say it. I'm sorry. I really am.

Doug: Coors Light. Because sometimes you want a beer, and sometimes you want something like a beer, but not. Like, Left Hand Milk Stout is fine if that's what you're into, but what if you've just gotten done running a 10K race? Or what if you're enjoying a Virginia Slim Ultra Light and are looking for a beverage to pair with it? You don't want depth or color, or taste, really, you're just looking for something that will slide past your taste buds like Diet Pepsi and maybe, if it's 100 degrees outside and you're on a completely empty stomach, get you mildly buzzed. And that's when you step up to the Silver Bullet, friends. When a beer company cares enough to signal when the beer is cold rather than force you to touch the icky bottle for a nanosecond longer than you absolutely have to, how can you, in good conscience, refuse?

Orson: Diet Coke. I'm totally addicted. I can't remember when I started drinking it, but it's just always there when I need it with its refreshing familiar aftertaste. My friend Dan says it tastes like construction paper pooped through the anus of a Wolverine that eats a lot of West African food. My friend Dan doesn't make much sense. He also spends a lot of time looking at things on his computer that he shouldn't at work. (Japan looks like a crazy place!) In conclusion, Diet Coke is great, and Dan's opinion here is a big ol' FAIL. 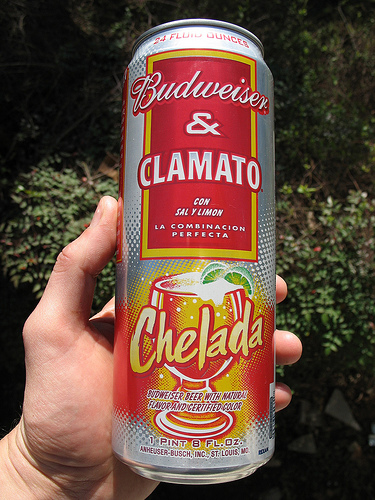 Holly: Budweiser Chelada. What's better than combining a nauseating beer cocktail with the robust flavor of a non-light beer that's completely inappropriate for the taste balance of the concoction in the first place? PUT THAT SHIT IN A CAN, LAWYAS. Man, those horse-beer bros thought of everything, didn't they? "O Pioneers!"

Orson: I don't like really serious restaurants. The wife is big on Top Chef. Where do they find these people? Do people really eat that? Thanks, Richard, but I don't really need liquid nitrogen in my food. I'm not even sure people are supposed to touch nitrogen, much less put it in their food. 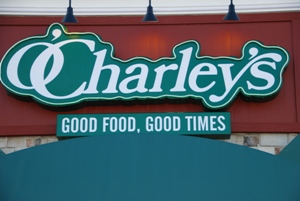 The three most important ingredients in my food will always be steak, good times, and good food. Only one place I know delivers all three of those all the time, and that is my neighborhood O'Charley's. Chicken O'Tenders straight from the fryer with 13 butter rolls? Only if you're bringing a pitcher of sangria and some of that amazing Chocolate Silk pie my way! Arrested for DUI in the parking lot? THAT'S GOOD TIMES.

Holly: Batter Blaster, which is exactly what it looks like: Pancake mix in a can for those who find mixing Bisquick and water together just too taxing in today's fast-paced Web 8.0 world! It's organic, too, which is never a distorted label and means it is good for you even if it is full of weird fats and carbs. Long commute? Try spraying it in your mouth for a festive, if gooey morning snack on the go! [HT: Alert reader DHIWAG.]

Doug: Let's talk about your health for a moment. Yeah, sure, you can take vitamins, but that's kind of the easy way out, isn't it? I mean, what's next, you want to live in some futuristic Brave New World society where everyone just gets their nutrition from various flavored pills? There should be at least a little challenge in getting your daily vitamins and minerals, and I can't think of a bigger challenge than acorn squash, which, even when you get past the mushy stringiness of it all, you've still got to deal with the taste. 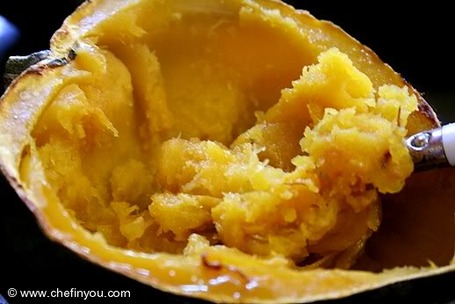 Were your parents too poor to buy you anything other than off-brand baby food in cracked bottles whose labels had nothing but Mandarin Chinese on them? Oh, good, then acorn squash has the added value of being a bit of a nostalgia trip for you. Mmm-mmm good!

Holly: The USC-Notre Dame primetime game, which will be played AT NIGHT IN THE DARK. This is different from previous years of USC-Notre Dame games at South Bend, where the lights would come on in the third quarter when it got dark. Know what's already on fire? My heart, that's what! [does not, in any way, make a dismissive wanking motion]

Doug: Explosions are so violent and destructive. Let's watch gymnastics instead!

[ed. note: This is, for real, my favorite YouTube video of all time. No foolin'. Try watching it whenever you're having a bad day. It can fix anything. -- H] 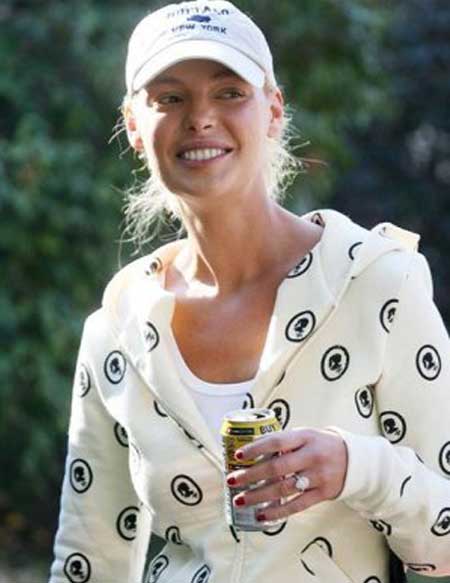 Orson: TALK ABOUT FLAMMABLE. Can't wait for her new movie, and--OMG IS SHE DRINKING A DIET COKE, TOO? Katherine Heigl, baby--what are the chances? It's DESTINY! Don't tell my wife! She'd slit my throat with a sharpened DVD of The Ugly Truth!

Doug: Sure, a Bugatti Veyron's nice, as is the Bentley Continental Supersports, as is the Lexus LF-S. But here's the question: Are you really gonna subject any of those cars to so much as a routine jaunt to Publix for a gallon of milk, where one errant shopping cart in the parking lot means you're ponying up ten grand (or more) to have the thing repainted? Of course not. For those of us who are only trying to get from point A to point B and don't give one tenth of a flying fuck about the appliance we use to make it happen, there's the 2011 Toyota Camry, the car HAL 9000 would drive if HAL 9000 needed to drive a car. From the inoffensive exterior styling to the Rubbermaid plastic lining the interior, everything about it screams "I am just trying to ease my way through life causing as little disturbance as possible." And isn't that what we all want?

Orson: BIG DOG. The Ford F-150. Just makes you feel safe driving it. It's like you're the king of the road, but you can also just drive it exactly like I used to drive my old Civic. Don't like this big dog? Get out of the left lane! The only downside is when guys like Dan ask you to help them move and scratch up your bedliner with their collection of ninja swords and spears they bought at the flea market. Dan won't ever get a date with a girl who doesn't wear a goth corset like she's from some movie about old British people.

Holly: The pink PT Cruiser stretch limo, because how can you possibly hope to contain all that stylin' in a regular-sized PT Cruiser? 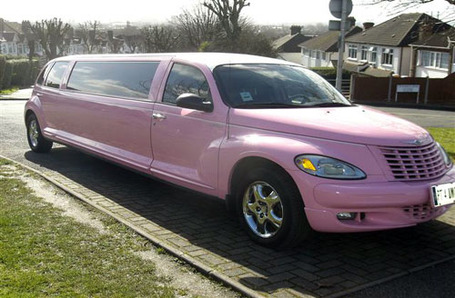 YOU CANNOT, is the answer.

Orson: Just read the words. Let them soak in. Think about them. They've got a lot to tell you.

Doug: Some call Michael Bay a hack director; I choose to think of him more as a sort of visionary psychologist. You see, I've been accused more than once of trying to relive my childhood, what with my Legos and model cars and whatnot, and that's probably not good for someone heading into his mid-30s. Bay, though, came up with a brilliant bit of aversion therapy with "Transformers 2: Revenge of the Fallen," because after sitting through two and a half hours of that iPhone-in-a-blender spectacle, I'll be incapacitated by PTSD flashbacks before I ever manage to submit a $1,500 bid for a mint-condition, still-in-the-box Generation 1 Megatron on eBay. Thank you, Mr. Bay, and thanks also for keeping Megan Fox around for the sequel, for you've tapped into exactly what I and every other straight male under the age of 35 really want in our heroines: vapid, plastic pseudo-bombshells who don't eat and can't act. How this thing made it past the Academy without a single Oscar win is one of the 21st century's great abiding mysteries.

Holly: Just let this wash over you. Ssshhh. Don't fight it.

Doesn't that just scream "THIS IS WHAT COLLEGE FOOTBALL IS ALL ABOUT?", from within a locked car trunk speeding through the Everglades? Doesn't it just? [tickly shivers]

Every Day Should Be Saturday reminds you to troll hard today and every day. Crazy Old Testament God bless, and have a GREAT weekend.