SENATOR IS SENATORIAL BUT IN THE UNGOOD WAY. Jim Tressel's very good at talking a lot without saying anything, and this will serve him well when the powers-that-be at Ohio State decide to look into Yahoo Sports' allegations that Tressel knew about TatGate* in April 2010, long before the story broke and Ohio State suspended the players involved for the first five games of 2011.

The story by Dan Wetzel uses a single anonymous source, the red flag for stupid people who like to point and say "HURP WHY ANONAMOOSE MEDIA FURRP." An anonymous source is fine, especially because this is Wetzel, who knows his shit and has a long track record of solid reportage. Don't rely on this as a critique unless you're dumb, and if you are please, feel free to get your dumbness all over the place somewhere else.

What is a ticklish question is whether that anonymous source is enough to spur any kind of solid investigation, and whether that source would ever go on the record. This seems highly unlikely. Tressel enjoys job security on a level few besides Paterno, Brown, and Mike Locksley do**. He litters his lawn with garden gnomes you call "Big Ten Title trophies." He's well-embedded in the Columbus community, and reads Dr. Seuss convincingly to children.

If Tressel knew--and proving this is very, very difficult, something we cannot emphasize enough here--then the ramifications could be dire. He could have his contract voided, and join Bruce Pearl in the League Of Contractually Undead Coaches. He could be fired. Ohio State could potentially have to forfeit every game the players participated in, which means the entire 2010 season evaporates off the record books and into the ether with USC's 2005 season and other great excised campaigns of college football history. In theory, there could be NCAA penalties to follow.

All of these are a less than one percent bet we will happily back in a legally sanctioned wager of your choice, because they will not happen.

*[scandal]-gate is tired verbiage, but damn if it's handy in summing up a complex series of events and circumstances in one easy word. Convenience is not to be underrated.

** If he hasn't been fired after the past two seasons, he will never be fired.

LET'S ASK AN INFLUENTIAL PANEL OF EXPERTS. Gentlemen, what say you? 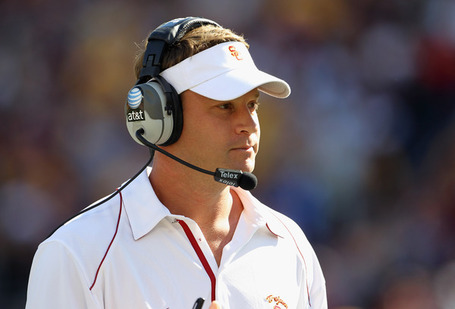 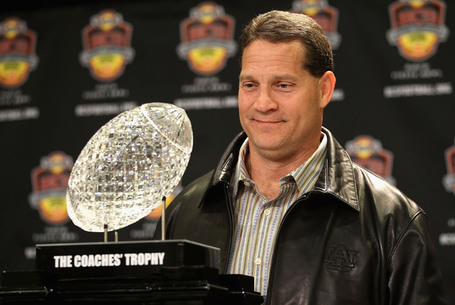 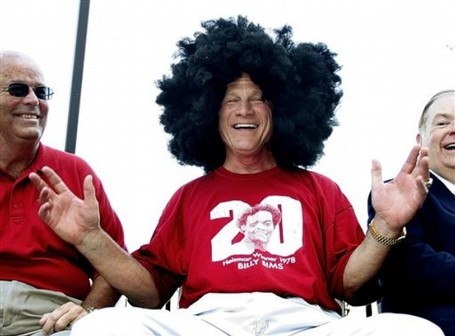 "I'M SORRY I CAN'T HEAR YOU OVER THE SOUND OF MY OWN TESTOSTERONE GUSHING THROUGH MY VEINS."

Our panel confirms our hunch that Tressel's fine here.

OH THAT'S SOME B1G SNAP. You forget that Stewart Mandel cares a little bit more when the Big Ten is involved, or that he can sometimes get his bitch on with the best of them.

ind you, we're only about three yards into one of Tressel's patented 17-play field goal drives in terms of learning his ultimate fate.

He also attended Northwestern, meaning he's seen a woman railed with a dildo-equipped power sander live, and you probably haven't.<-----Assuming a lot about you, but it's another bet we'll take unless you are Rick Muscles. And if so, well, you probably haven't seen it twice, man.

NOTRE DAME TO STOP USING STUPID THINGS IN ALL WEATHER. Notre Dame will stop using scissor lifts to film football practices. Echoing half of the sportswriting community on the BYU case earlier this week, it's a shame to see other schools not follow the principled stand Notre Dame has here.*

*After accidentally killing a student assistant, but overlook for rhetorical punch! MORALS!. : (  ---ed.

SPEAKING OF MAJOR VIOLATIONS. Auburn's pro day is today, and will be streamed live on ESPN3. If someone taps you on the shoulder and suggests you have to pay for it, that is Cecil Newton. Please point him in the direction of a dilapidated shed and suggest he start a "church," and continue watching.