CRAIG JAMES SAYS LUBBOCK SUPPORTS HIM; LUBBOCK'S LIKE NO, GTFO

Craig James may very well run for the Senate seat formerly occupied by Kay Bailey Hutchinson, and if you don't think he's qualified you've never read any Molly Ivins column about the intellectual capabilities and relevant professional experiences of most Texan politicians, and are unaware that their current governor has openly toyed with the notion of secession while jogging around with a Ruger shooting coyotes in the hill country surrounding Austin.  He seems like fun, even for a Texan governor, and we really, really mean that. 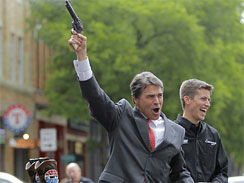 James made a statement a while ago about most people in West Texas supporting him, especially in regards to his clash with former Texas Tech football coach Mike Leach. Texas Monthly decided to test this proposition by asking West Texans in Lubbock, Amarillo, and Odessa. They begged to differ with the findings of Craig James' influential polling group of one .

"With Craig James’ recent claim that people in Lubbock support him [published in D Magazine], we decided to take a closer look at voter sentiment in West Texas," said Stefan Hankin, President of Lincoln Park Strategies. "We found that Mr. James has virtually zero support in West Texas. He is, most likely due to his role in the firing of Texas Tech Coach Mike Leach, a very unpopular figure."

Only 25% of those who had an opinion re: James v. Leach believed the coach was at fault, with a plurality of those polled blaming the AD and administration. James overall enjoyed a 52% disapproval rating, a number lower than our current President's. We implore James to ignore this fuzzy math, dismiss the "haters," and proceed apace with a vigorous and extremely expensive Senate campaign focusing on these very voters. He'll have to miss the entire fall football season, and that will be a shame, but sometimes your country comes first, Mr. James.

This has been an announcement from the EDSBS Department of Serious And Not At All Duplicitous Political Advice.