Hey, it's NCAA tournament time and with just one more poll to go in the college basketball season, it's FUCK THAT NOISE BRIAN OF HORSECOCK MANOR* RODE OVER HERE AND MADE YOU A FULMER CUPDATE THANK HIM YOU INSOLENT INGRATES.

*A submanor of Reggie Nelson Acres. 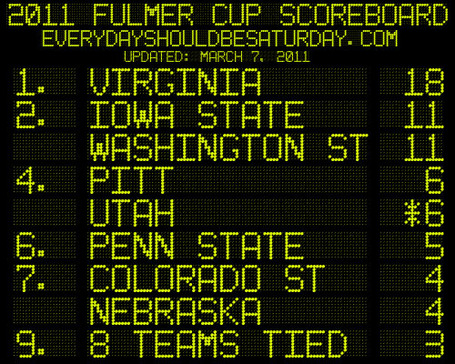 IOWA STATE. Ames, Iowa was named by CNNMoney as the #10 place to live in America, and included this crucial note.

If the people who live here get bored, they have only themselves to blame.

Iowa State football players agree, since they make their own fun and often do so in ironic fashion. This is Steve Lattimer from The Program, the amalgam of Tony Mandarich, Brian Bosworth, and a few other steroid wonders of the 1980s college football scene. He makes the team and puts his head through a few car windows in the parking lot. Later, the same guy who plays him takes the role of El Charro in The Curse of El Charro, but doesn't even get to voice the character when they insist Danny Trejo do the voice. This man is physically more imposing than Danny Trejo, and that should be his entire resume. 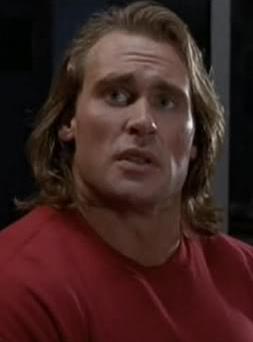 Redshirt junior Jacob Lattimer, arrested for assaulting a peace officer and interfering with official acts early Saturday morning, led the Cyclones in sacks last season. He looks like this, and is named "Lattimer." 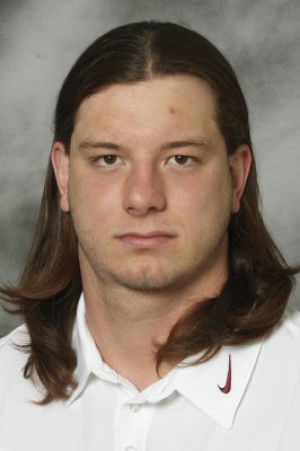 We will spoil one element of the scoring from the start in admitting that you're damn right he's getting a bonus point for being a defensive end named Lattimer with Hercules hair demonstrating unruly behavior in public.

We must first double up with Iowa State's Reign of Hair-ror this weekend by also mentioning mohawked ISU tight end Ricky Howard's OWI arrest, the second for the Cyclones and the first this season for a player with a mohawk. Of all the various legal terms for DUI, "Operating While Intoxicated" is our favorite since it makes driving sound like CIA work.

"I'm not driving, officer. I'm operating, and getting home after having a 12 pack all by myself is work as delicate and nerve-wracking as performing brain surgery or wiring up 2 pounds of plastique in the belly of an Iranian nuclear power plant. I hope you'll understand why I had a few drinks to take the edge off."

Iowa State's points work out thusly: three felony points for assaulting a peace officer, one bonus point for being named Lattimer with authentic Lattimer hair and behavior, two for standard OWI, and a bonus point for doubling up on offenses in a weekend while wearing a mohawk. That's eight points in the Fulmer Cup for the Cyclones, who clearly have plenty of entertainment in Ames to keep them busy and in sight of UVA's once insurmountable lead.

WASHINGTON: Running back Johri Ferguson would have just picked up a simple two points for misdemeanor weed possession and resisting arrest, but nooo, he had to be a dick about it.

hen the trooper told Fogerson he was being arrested for suspicion of marijuana possession, Fogerson broke free and ran eastbound on 164th Street, Leary said. The officer shouted at him to stop, but Fogerson kept running and escaped the scene.

A male passenger in the car was not arrested, Leary said.

"Bro, it's been nice, but--" [RUNS AWAY AND LEAVES OTHER DUDE STANDING THERE WITH COP AND DRUGS.] Never leave a man behind, and never get arrested when we can pile on the irony of your mother being a policewoman in the area. Ferguson did display admirable elusiveness, though, sprinting clean away from police before later turning himself into police at his mother's behest.

Leaving a man behind and forcing your mother, a policewoman, to help negotiate your eventual arrest is a bonus point. Along with the two misdemeanors, that is a three pointer for U-Dub in the Fulmer Cup.

AUBURN: Eric Smith's misdemeanor domestic violence charge has been corrected from the felony scoring it was given last week, and those responsible have been sacked (and rehired at higher salaries.)