STEPHEN GARCIA: "I PLAYED POORLY IN THE CHICK-FIL-A BOWL BECAUSE I WAS UP READING."

Share All sharing options for: STEPHEN GARCIA: "I PLAYED POORLY IN THE CHICK-FIL-A BOWL BECAUSE I WAS UP READING."

Responding to unfounded rumors he went on a massive bender before the Chick-Fil-A Bowl involving naked women, alcohol, and a midnight treadmill punishment session with South Carolina coaches, Stephen Garcia sought to clear the air on Friday. According to the fifth-year senior he was not drinking or partying with ladies, but simply lost track of time reading late into the night.

"It got out of hand, I'll admit," Garcia said in an exclusive interview Thursday evening. "I mean I know I'm behind on this by like a decade, but all I wanted at first was to finish A Staggering Work of Heartbreaking Genius before bed, you know? And yeah, I guess I was disappointed because of Eggers' use of deliberate irony to undercut the emotion, which is so tired and post-post-modern. Just overplating, as a chef would say."

Garcia then said the binge began in earnest.

"Then I went through Water for Elephants, and like, Jesus, do you really want one more circus book in your life? I don't care how pretty the prose is, man. I just end up thinking about creepy carnies and the smell of zebra shit the whole time. So that was around one o'clock, I guess, but I thought, "I don't have to be down there until 9, so I've got a little more time."

Garcia then began to spiral out of control. 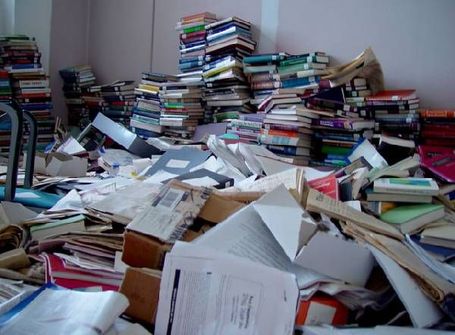 The aftermath of Garcia's pre-bowl binge.

"So I cracked out Drop City, and yeah, that was okay. Kind of want a tetrahedral house after reading that. Could be chill. So that was like two-ish, and I said, "Well, shit, let's just go through Inside of a Dog. Boy, that book was NOT what I thought it was going to be: not about bestiality, and definitely purple with the prose. That's cool, babe, you've got a thesaurus! We all do. Get over it!"

The binge finished halfway through The Poisonwood Bible by Barbara Kingsolver. "I'm big into that displaced-expat-horror thing, and have been ever since I read The Mosquito Coast as a kid, but I dunno. It just seems sort of formulaic so far. I'll admit this because I want to be honest: I had to cleanse the palate with a beer around 6 a.m. and a little bit of Jane Austen."

Garcia paused and appeared emotional at this point. "I know it's excessive, but...I dunno. You know, Levar Burton left his mark, I guess, because this guy's bitch-ass just loves reading. Sometimes too much, I guess."

Garcia said he has apologized to his teammates and coaches for his lack of discipline, and that he is starting Jennifer Egan's A Visit From The Goon Squad when he gets home tonight, but not before watching television with his teammates to make amends.

"We're going to watch something called The Real Housewives Of Atlanta, I'm told. I guess it's cool to roll in the pop culture trough as a grounding exercise, right? Now that's intentional grounding, right?"