Delayed this morning by editorial meetings in DC. DAMN YOU SCANDAL WHY CAN'T YOU MAKE APPOINTMENTS---

THE EVILS OF THE NCAA EXPOSED AT LAST! 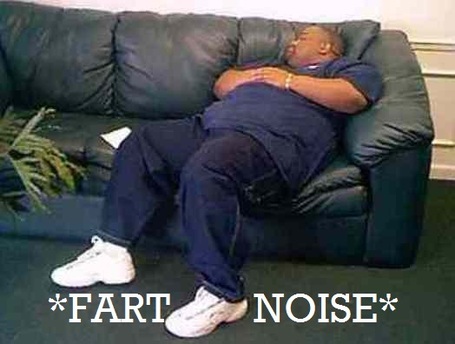 You already knew most of what would be said in the special last night, and likely either believe the testimonies of four players, or are an Auburn fan determined at any cost to undermine the case by either suggesting that HBO paid the players (highly unlikely, and Alabama grade conspiracy material,) or that the players' stories are invalidated by their personal grudges against the university. Alternately, you can simply demand forensic evidence of a legal grade, something the NCAA doesn't need or want in lieu of multiple testimonies. We just wrote comedy because that assumes the NCAA a.) cares, b.) can do anything about this, c.) would lift its own statute of limitations to pursue the case,  and d.) can get out the door in the morning without tripping on its own limp penis.

FWIW, Auburn fans seem to be demonstrably sensible about this: according to a poll on Track 'Em Tigers, all but 24% of fans believe some or all of the allegations to be true. Gene Chizik called the allegations and HBO's portrayal of the situation "pathetic."  For accuracy's sake, we will assume he was referring to the panel discussion involving Jason Whitlock, who leaned heavily on conclusions from studies made by the Institute of Duh Studies in his discussion of the issue while yet again citing how awesome it was that he was able to work so hard to become our nation's sleepy-eyed onion booty-scoping troll overlord. Way to go, you.

AND LET'S JUST SHAKE ALL THIS SHIT LOOSE AT ONCE.  Laugh at Auburn your own peril, because this could turn into a full-on Puritan confessional real fast like. We're still pointing and laughing, because of all of the comical swamp millionaire casting most booster cadres use, Auburn's is among the most cartoonishly corrupt and evil-sounding, and indeed the clumsiest and cheapest.If you are an Auburn grad, please get wealthy so you can do this right and with the requisite amount of flair next time.

We're not even talking huge amounts of money, or ingenious methods of delivery, or a well-orchestrated conspiracy. As longtime Auburn reader Board Certified Scrotologist said last night: "JESUS OUR BOOSTERS ARE CHEAP."  They were in terms of what it could have been, and likely are compared to what's being paid on the black market by other schools. If it's even half true they've had a system for a while, and it's apparently changed very little since the Pat Dye days.

That accepted, watch your ass. If you're an SEC fan--present!--this is going to just roll on, and on, and on:

A few days after the kid's visit, Will calls and says, 'If you want this kid, there are other schools that want this kid as well. They're willing to pay a certain amount of money, around the $80,000 mark,'" Malone said. "He said that was something we were going to have to beat as a university to be able to obtain the services of this kid.

WHEEEEEEEE OFFSEASON. We still think nothing substantive happens with any of this until we see a glowing and inbound letter of inquiry headed Auburn's way, and even then it's nothing better than a trace chance of any eventual punishment. Remember that in 1992 Pat Dye admitted he knew about payments to a player and then resigned, and only then did anything happen in the case. No one's saying shit here, and likely won't, and barring a USC-style invention of NCAA jurisprudence in reaching a penalty this hits a dead end.

The upper left hand corner of USA Today did say "AUBURN PLAYERS PAID" this morning, with tiny, illegible clarifications and "alleges" underneath it. You'll also see everyone else start to empty their scuzz files, and that's when the real fun starts.

DENIALS. There are many and will be plenty more, but at this point we almost look at Auburn players insisting they weren't paid anything and think, "You probably shouldn't be admitting that at this point, because dude, money on the freaking table." We can't decide what looks worse: paying players, or buying them off with sums that seem so obviously and consciously low compared to the revenue they generate.

OH YEAH, THAT OTHER SCANDAL. The BCS has enlisted Jeremy Foley (among others) to investigate the Fiesta Bowl and its future with the BCS, and if he's smart he'll ask Jerry Jones for at least $15 mil for a favorable judgment against the baller-as-hell desert boondoggle in favor of the Cotton Bowl as a replacement. It's what America's Qatari sheikh should pay for the privilege at the least.

WELL, OF COURSE HE DOES. West Virginia's new special teams coach and inside receivers coach Daron Roberts has a JD from Harvard. Bill Stewart don't trust book learnin', as he says he got his own way of courtin', coachin', and livin' and dyin' and---