THE HOTEL DIARIES OF WILL MUSCHAMP

Share All sharing options for: THE HOTEL DIARIES OF WILL MUSCHAMP

From the journals of Florida head coach Will Muschamp, who has been living in hotels while his family slowly transitions from Texas to Florida.

December 14th, 2010. Just got into hotel. Things here kind of weird. Keep hearing drums when I walk down hallways. Typing things over and over again when texting recruits and they don't even make senes. My name's not Jack and I don't care what makes him dull. Went for a Red Bull at two and saw this in the hallway. 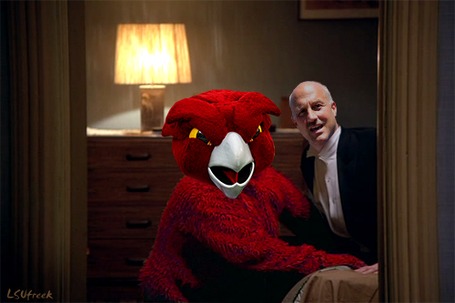 Shit, if it's haunted I'll deal with it. I coached for Saban. Waves of blood coming out of the elevator is like Tuesday in his offices. And most Wednesdays, now that I think about it. Note: borrow tradition of midweek blood tidal wave elevators to motivate staff. Have assistant seek blood dealer.

December 23rd, 2010. Feelings of isolation. After work came home to hotel and sat in bar and talked to girl. She's young be but we have strange bond. She talked about her husband and how she doesn't know what to do in life. I told her about my flex eagle packages. I hope she knew I was talking about football. That could be a very confusing conversation. We did some karaoke with the locals and for some reason I damn near started crying in the middle of "Three Steps" by Lynyrd Skynyrd. Some might think there's a midlife crisis in here. I think I just didn't get enough protein or something.

December 29th, 2010. Spent most of day cooking looking forward to coaches' meeting. Goddammit where does a man have to go to buy shallots in this town? Sauces aren't gonna stand up to all this heavy cream I bought without 'em. I'm making Coq Au Vin, will bake some cucumbers, and will match it all with some Chateau Lafitte. Or a 24 pack of Busch Light. I'm torn.

Girl left. We never did anything, but before she left I whispered "Boom, motherfucker" in her ear. I hope she takes that to heart and never forgets it, because I really meant it.

December 30th, 2010.  My social with the rest of the SEC coaches...Jesus, let's just not even talk about it. Saban is such a dick sometimes. Make note to assistant:

January 5th, 2011. Got Charlie here. That's good. Got a little bit of coaches' block going here re: the playbook. I've always found good playbook comes from an inner pain. That's why Saban makes his assistants swallow tacks and binder clips. Makes better playbook. Life of the mind and all. 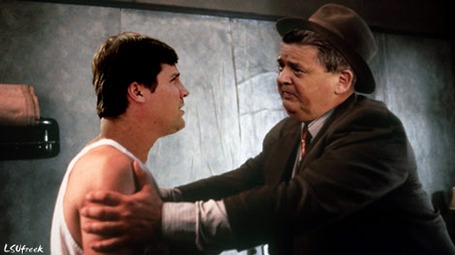 January 6th, 2011: Charlie's had to get a new hotel. Probably a good thing for our relationship. Once his blood sugar goes crazy around one in the morning he gets kinda hard to handle.

In good news, the "Life of the Mind" blitz package is looking real solid. I'm liking it a lot. Think it's that girl winking at me in the painting on the wall. Note to assistant: procure sealed asbestos walls for Weis' office.

January 23rd, 2011. Keep having these dreams, like where I think I'm in a dream, and wake up in a dream? You know? Like last night I had this dream I was doing crazy sideways Matrix fights with Charlie, and then I tied him up in an elevator shaft and he just floated there like a big levitating Narwhal. Then I was in a city I built. I'd call it Boomtown if it had a name, so let's just call it Boomtown.

I'm arguing with Chris Hatcher and I'm back at Valdosta State and Paul Johnson comes in and pushes me off a building and I fall, and just fall, and fall, and fall past Tuberville, who's just kind of floating there on his big ol' ears, you know? And he says "Don't ever go to Lubbock," and I'm like, "YEAH," and we laugh, because yeah, Lubbock.