CHOCOLATE. SAUCE. CHOCOLATE. SAWWWWWWWWCE. When did you have us transfixed? From the start, really, but especially when you say the words "energy drink battered horsemeat."

"Son, you'll die at this University in three years, but they'll be better years than anyone can possibly comprehend."

Did you see how much goddamn chocolate ends up on the roof of that bigass protein bar? Did you notice they weren't kidding about using horsemeat? Or that the energy drink has BACON IN IT?  If some football program does not hire these men as nutritionists they are pissing in Victory's face and telling it unkind things about its shoulder development. Your linemen will die in their junior year, but the performance by a pork-angered line averaging 400 pounds across the board will make for two truly spectacular quarters of football every Saturday. (The first two, before they get winded and start making flop-blocks for the entire second half.)

DO NOT MAKE US LOVE YOU JIM TRESSEL. The header is a bit misleading since we already do sort of love Jim Tressel both for his sartorial genius and for his unwavering Senatorial squareness, but pics of him reading Green Eggs and Ham to school children while wearing a rave hat do not dissuade our affections, especially when he's clearly giving the eye to zaftig library lady here. (HT: CKopech) 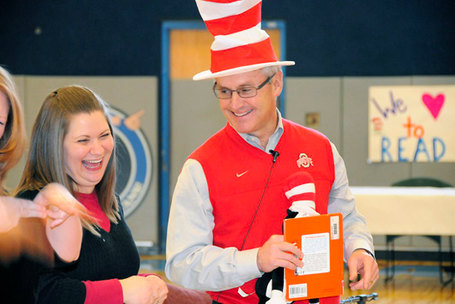 "My favorite play is Dave. It involves a long pull, deep penetration, and pure power."

SOMEONE'S LOOKING INTO SOMETHING. 2011 Oregon signee DeAnthony Thomas posted on his Twitter page that he did in fact meet with the NCAA yesterday, an experience so jarring he was forced to use ALL-CAPS to properly describe the emotional impact it left on him. That the NCAA is looking into Oregon does not mean they are the only school under scrutiny, of course, but it does lend some credence to the notion that Colin Cowherd may not be completely full of shit here. We HATE IT WHEN THAT HAPPENS. <--emotional all-caps is emotional. (HT: CGB)

SAD MEN FLAGGING HOMELESS MEN FOR THINGS THAT DID NOT HAPPEN. The Pac-12 has fired eleven officials from their odious officiating corps, a start at a complete overhaul of the conference's officiating apparatus. If you see sad random men across the American West throwing flags at sleeping hoboes under overpasses and drinking rubbing alcohol, you are seeing one of these sad men.

ARIZONA DISMISSES A PLAYER NAMED BUG. It's not a huge dismissal, but his name was Bug, and that has to count for something.

YOU SHOULD PROBABLY FOLLOW THIS MAN. Bo Pelini has to love Cameron Meredith, except when he eats teammates as an example to others to illustrate the struggle for survival in action.

NORTHWESTERN ONLY SOUNDS SEXY UNTIL YOU THINK ABOUT WHO WAS DOING THIS. Suck it, BYU. No really, suck it. It's part of the demonstration.

FOR ONCE A SPOKESPERSON IS TELLING THE TRUTH. Penn State's response to the SI data set on football criminality:

"We don't like to comment on assumptions based on flawed methodology," said Guido D'Elia, director of communications and branding for Penn State football. "It doesn't match up with what we know."

No, no it does not. (Guido D'Elia is the ballingest name in all of college PR.)