Share All sharing options for: A POETIC AFFIRMATION FOR JOHN BRANTLEY: HAIKU

In an effort to be a positive team player, we begin a series of weekly affirmations to rebuild the confidence of John Brantley, Florida's quarterback who will be so much better in Charlie Weis' system than he was in that horrendously stupid thing Steve Addazio was doing. Chin up, John! 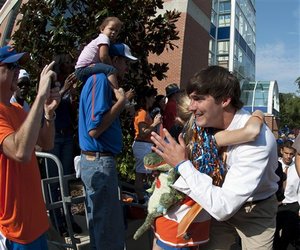 girls sacked the shit out of you.

Not this season, bro!

Reader note: Brantley was not harmed in this sack he took outside the Swamp last year, as he had already broken every rib he had in Florida's first five games.