--A patron saint invoked for inspiration 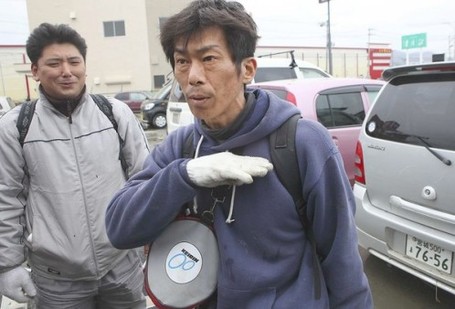 You have to roll deep with tenacity to even get on the charts of Japanese Patron Saint candidates, but fortunately Hideaki Akaiwa brings his own scuba gear, knife, and most intimidatingly his own bad ass to plumb the depths with the island nation's greatest indestructible souls. Akaiwa is described as "an avid outdoorsman," a term that in the United States means "is forty pounds overweight and enjoys drinking scotch in a duck blind while shooting spastically at crows."

In Japan the term must truly mean something, since Akaiwa, presumably unable to get to work at his Demon Assassin Frogman School after the tsunami, turned towards the task of finding his wife and his mother, both trapped in various crumpled heaps of twisted wreckage in his hometown. Akaiwa did not form a search party, or pass out fliers, or even ask the overwhelmed authorities for help.

Akaiwa put on his wetsuit, popped in his regulator, and did it by himself.

He first found his wife stuck on the roof of their destroyed house, then found his mother after she'd been trapped for four days in her house, and then, with little to no rest, went back into the aftermath to search for victims. This is made even more impressive by Akaiwa having to battle mutant rapesharks, the scourge of Japanese coastlines, and the haunting memory of how his master at Demon Assassin Frogman school died doing the exact same thing.

We look forward to Akaiwa becoming the first Ninja Warrior champion to conquer the course in record time while running the entire thing wearing a rebreather and wetsuit.

Orson: THE "SURVEY SAYS HEROIN." This is not actually the proper name for this drink. The proper name for it is the Tum Yummy Swizzle, but I'd sooner brand myself on the penis with a curling iron than name something I'm drinking that. I also simplified the drink by removing such pesky requirements as "candied ginger for garnish," because seriously you're just going to eat it out of the bag after two drinks anyway.

You could also save yourself the trouble of buying Domaine de Canton, a ginger flavored liqueur that would sit with all your other rarely used malcontent underemployed liqueurs on the shelf. They'd start stealing things out of your car at first, but they'd get bolder, and soon you'd be wondering just where Frangelico, Creme du Cacao, and Midori sold your flatscreen, and why they had to shatter poor Galliano out on the sidewalk after the caper. (Was he wearing a wire? Did he seem untrustworthy?)

Prevent the eventual underutilized liqueur rebellion by just using a pinch of grated ginger, but not too much, and you'll have a super-simple cocktail that tastes like a pleasant shipwrecked spice ship in your mouth. Call it whatever you like as long as it doesn't contain the words "tummy" or "swizzle."

Holly: THE SCORCHING LEAP. Our Twitter hangers-on will note we (singular we) find ourselves in Miami this weekend, where our hosts clued us in to a Florida Room bartender cooking up a cocktail garnished with sriracha. The definition of insanity is not that thing about doing the same thing and expecting the same result. It is this other thing.

Holly: Devotees of meatsome fat things will want to check out friend of the program The Gurgling Cod's recent no-artery-left-standing tour of New Orleans, where he enjoyed an eggs benedict po'boy, which is apparently exactly what it sounds like. 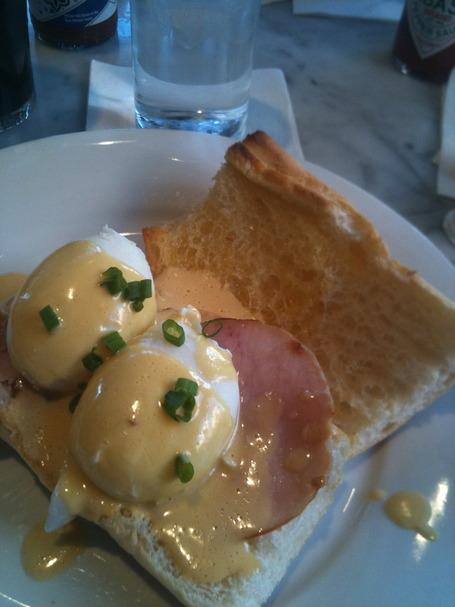 Orson: Gumby's Big-Ass Pizza. Samuel Johnson once said that ""He who makes a beast of himself gets rid of the pain of being a man." He was a visionary, because Johnson was clearly speaking of Gumby's Pizza in the 18th century, as posited in his Notes on Gluttonie and the Physick of Ill Men.

"I foresee a place that shall construct the starchy flat meatpies of Italie, and shall so so in dimensions unseemly to the eye but pleasing to the hande and eye, so that when consum'd would render the consumers consumed as the mule who discovers and devours a bag of penny-nails."

The Gumby's 20 inch pizza isn't so much food as it is a dare. It is the size of a manhole cover, and when ordered usually requires not one, but three separate pizza sprockets embedded in its hide to pin it to the box. The grease alone is enough to set most cars on fire, and is the reason Gumby's pizza drivers wear silver flame-retardant suits while transporting them. The Federal Highway and Traffic Safety Administration estimates one out of every one cars on fire in a University town is in fact a Gumby's pizza delivery van. With the exception of Frank Solich's car every other year in Athens, Ohio, this is a completely valid statistic.

Normal people look tiny next to its huge bready luminosity: 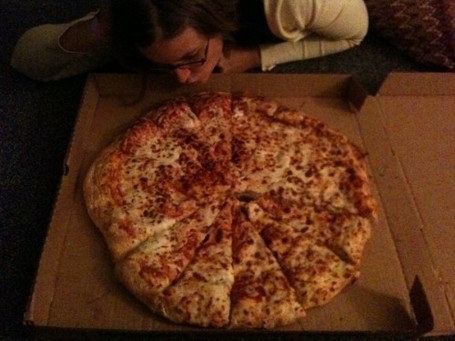 This woman fell into the pizza shortly afterward and was rescued by Hideaki Akaiwa, who immediately dove back into the scalding cheese-waters to find others.

Orson: Oh, hahaha, the French haven't won a war in centuries. Laugh all you like. They still get way more vacation than you do, eat butter by the spoonful without bloating up into buffet dragons like Americans, and they know how to disarm a fucking hostage situation: BY BLOWING IT THE HELL UP.

(It's okay. You can laugh when they miss with the grenade, proving again that life is a lot like Black Ops, but without respawn.)

Holly: This is more of a plea than a display, but please, universe, make the mighty medieval axe-gun widely available for purchase across these great United States. 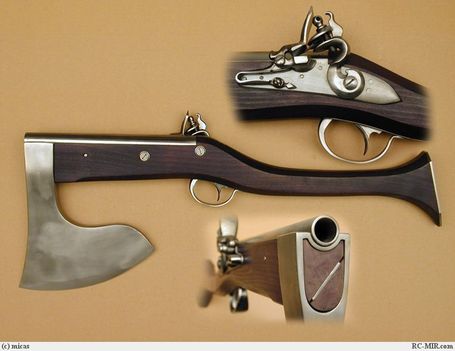 Or, just give us one, because we have always thought it would be just the thing to moderate shirty internet message boards. [pats imaginary axe-gun] 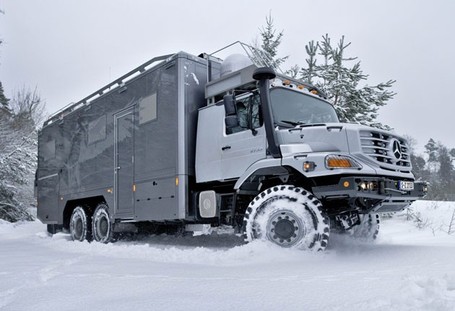 Tipster advises: "Please note this is a platform for hunting wolves with an eagle." DULY NOTED.

Orson: A car with only one door, the whole door being the front of the car, causing the entire thing to look like a flying eighth note in repose? AND it's certain death if we get in a head-on collision? 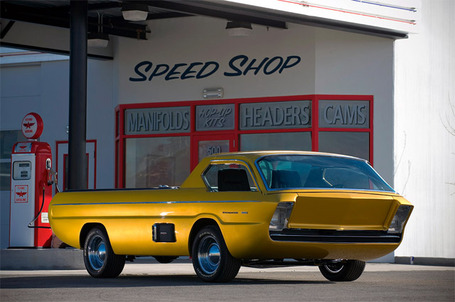 Orson: I can't make the music video of my dreams, since Herb Alpert already made it.

Let's just have a video where we pull up in our vintage roadster to some glamorous Hollywood home, and then we'll just have people take pictures of us, darling, just us being deliriously happy. How we'll laugh! I'll then dance, and this hep-looking black guy will just affirm, he'll just point and do nothing but affirm like, "Herb, you're aces!" And WE'LL LAUGH DARLING. Then I guess we'll just let the song ride out while I lead a parade of whacked-out people down the beach during a Malibu sunset like some kind of be-horned coke wizard. BRILLIANT.

This video sums up the ambitions of every man alive in 1980, and provides its soundtrack. it was also the super-sexy theme for Luke's rape of Laura on General Hospital, played eight times daily in every grocery store you ever shopped at from 1982-1995, and was last but not least the beat behind the Notorious B.I.G.'s "Hypnotize." (Bonus: Amitabh Bachchan learned to dance in Yaarana to it. I'm sure they asked for permission to use it.)

Holly: We're in Miami in the first place because we managed to dodge the raging airport hellfire just in time to snag our credentials for this little shindig. And though we are here the ONE TIME the Stanton Warriors are not, and though the Klaxons have surreptitiously cancelled their entire North American tour (aroo?), soaking up Fake Blood's set is on our agenda instead, along with doses of Duran Duran, Cut Copy, Boys Noize, BT, Hybrid, and MOTHERFUCKING ERASURE.

We plan on embarrassing ourselves assiduously during this last show tonight, so look for us in the crowd. We'll be the ones they're not taking alive.