FULMER CUPDATE: THE BIG BOARD GETS SCENIC

Share All sharing options for: FULMER CUPDATE: THE BIG BOARD GETS SCENIC

The Big Board was perfect until Miami's Ramon Buchanan had to go and get kicked out rather bumptiously from a Dade County nightclub. As you can see, it is redone, complete with scenery befitting our vanilla and chocolate porksword overlords Brian and Reggie Nelson AND commemorating Auburn's massive Fulmer Cup points-pile. Comments and new entries follow. 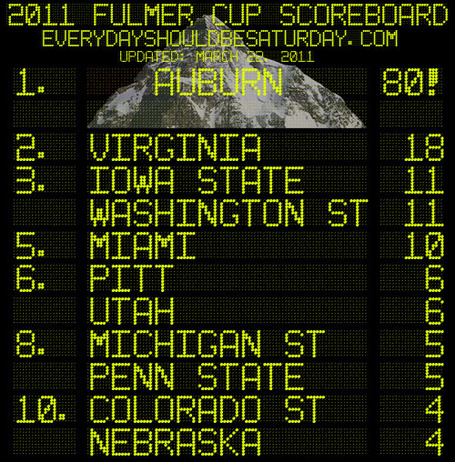 LO, A MIGHTY PEAK. There stands Auburn at 80, a K2 of feloniousness other teams can only hope to summit with siege tactics, oxygen, and a mindset reminiscent of our most dogged mountaineers. Without a Reinhold Messner around, they're up there for a while based on the massive heap of charges handed down by Lee County prosecutors in the case of four Auburn football players involved in a robbery. The K2 is in no way a reference to the synthetic weed the players were allegedly high on at the time of the incident, and in no way are college players using it to avoid testing positive on marijuana screens, because none of this is true. Nope.

MIAMI BREAKS THEIR FAST IN A HEAPING BREAKFAST OF CHARGES. Miami linebacker Ramon Buchanan's arrest came as a result of "a bathroom disturbance." You probably can be arrested for farting too loudly in violation of a noise ordnance, but this is not a test case for that, as Buchanan was merely extremely drunk and belligerent.

When he was placed in a chair in the security office, Buchanan allegedly charged Peoples and "began to thrash his body," attempted to headbutt Ortiz and spat on Ortiz's palm. When Buchanan refused to respond to orders, he was forced to the ground.

According to the report, Buchanan allegedly then said, "I'm a U.M. football player and I don't give a f--- what you do. I'll get out of it. F--- the police."

THEY'RE BACK BABY. Buchanan is charged with two felonies at three points a piece, and also has three misdemeanors, bringing his pre-bonus total to nine points. A bonus point will be awarded for breaking Miami's four year long absence from the Fulmer Cup annals, since they last made the list when Robert Marve (late of Purdue) punched a car door mirror and ran. Sometimes a player's whole collegiate career can be summed up by a simple misdemeanor they commit. This is one of those instances.

Ten points to Slytherin Miami in the Fulmer Cup. Welcome back, you old pros.

THAT SWIMSUIT IS BOTH UNPAID FOR AND NOT A PAIR OF UNDERWEAR, SIR.  Ole Miss quarterback Evan Ingram may have both the most Ole Miss name for a bench qb ever and the Most Ole Miss Crime ever. Ingram was arrested and charged with misdemeanor theft under $500 and resisting arrest by flight after attempting to steal a swimsuit from a store by wearing it underneath his clothes. We hope it was a Speedo, because that would be the only possible excuse. He likes them! They're comfortable! The freedom is amazing!

Ole Miss receives two points for this, though they would have received three if ingram's first name were something like "Tanner."

PENDING JUDGMENT: NOTRE DAME. Michael Floyd blew a .19, proving yet again never, ever consent to a breath test ever, since we now know you were quantifiably hammered, and not just a wine cooler over the edge as you might have been in the most sanguine of forgiving ND homer dreams. Standard DUI, which this is as a misdemeanor, is two points, so a bonus point for excessive BAC takes ND's haul to three points for the whole caper.

NO SNITCHING: THE MOBILE CITY MOTTO. Mark Barron gets a single measly misdemeanor point for his hindering charge, showing an inability to catch up to Auburn you may be familiar with from last year's Iron Bowl.