KEITH JACKSON CALLING KEITH JACKSON. Keith Jackson never had a better broadcast partner than Frank Broyles, former Arkansas coach and possessor of the world's most staggering old Georgia accent, a soft aristocratic yodel capable of turning a "wall of blockers" into a "waaaahul of blockaaahs."

Yet the richness doesn't end there, since this clip is a Napoleon of layered vintage college football pastry. You have Keith Jackson calling Keith Jackson, most likely while someone in America named "Keith Jackson" watched from his Barcalounger and yelled, "KEITH JACKSONS! YES!"  You have the improbable Tight End Around out of the wishbone, which not only succeeds but goes for an 88 yard TD with a stellar Jackson call "He's running out of gas ER UM HE SCORES." You have the douchebag wearing aviators at 0:19, proving that the male douchebag is not a modern invention, but rather a species that like the chameleon changes its colors to adapt to its environment. His date really is better looking than this screencap shows. We promise. 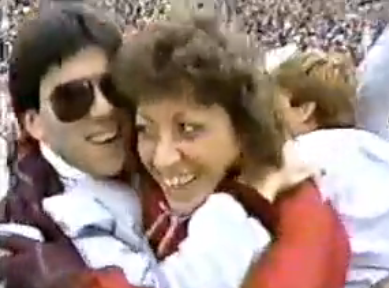 ONE SUREFIRE WAY TO ELICIT AN ARREST FROM THE UNIVERSE. Have Brian do a Big Board, a glorious Big Board with special graphics updated scores, and then watch as someone just has to cancel the whole thing by committing felony battery on a cop. The long span of zero arrests under Randy Shannon's watch extending all the way back to Robert Marve's arrest in 2007 comes to a spectacular end thanks to Miami linebacker Ramon Buchanan, and shit, son, he did it BIG.

Buchanan, 21, was charged with resisting a police officer with violence and battery on a police officer, firefighter or emergency medical care provider, both of which are felonies.

There are no immediate details on exactly what happened in the incident or the circumstances, but they will be stupid.

WATCH YOUR ASS, TAYLOR. And if Bo sees you on the phone even once in the locker room, you're fucking done, son.

MEN NAMED BO HAVE A HISTORY OF LUNATIC INTENSITY. "Say you're a bitch. Just say it. I'm not letting go of your hand until you do. Woody and I did this once at the 50 yard line following a game and everyone just stood there for four days until we passed out from fatigue. Don't think you can outlast me, Mouse. It can't be done." (HT: MgoBlog)

YOUR FAVORITE VEGAN PANCAKE MASHER. Florida's resident vegan half-Kosher once-shot king of pancake destruction, Matt Patchan, appears to be on track to recover from injury in time for spring weightlifting, summer workouts, and fall starting time. This is all provided he doesn't get in a fistfight with an elephant, fall down a mineshaft, or crack his skull trying to headbutt an apartment building to death between now and then.

THE LEGEND LIVES. And is convicted for his crimes only after serving a three years sentence for some other shit he did, because Ellis T. Jones' schedule is just that busy.