The Big Board is brought to you by Brian. Did you see the sun today? Thank him and Reggie Nelson for not blocking it with their immense members. This is a busy update. Please prepare for ADDulation like nothing else you'll see on a standard offseason Wednesday. 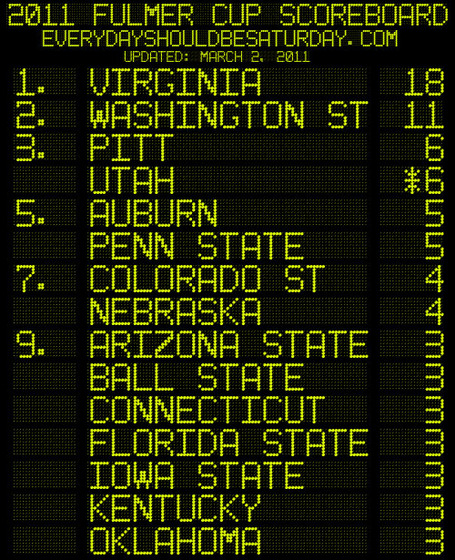 ENOUGH WITH YOUR FUZZY ROSTERING. Pitt has a lineman tased four times, and suddenly we're all making clear that he's a former lineman? Technically we can only award points to guys the school in question recognizes as being on the team, but enough with the bullshit surrounding teams' walk-ons, various endangered species of sketchy, half-on, half-off stragglers, and other assorted cast members who can work out with the team, angle for spots at spring practice, and otherwise allow for flaunting of rules surrounding roster size.

Oh, we hear you. "He's not on the team!" And yet there's a PItt football player at the scene saying this:

A man who said he was on the team with Mr. Diaz told him to "shut his mouth" and accept the citation for being publicly drunk, cautioning him that former Pitt Head Coach Dave Wannstedt was not there any more and new coach Todd Graham would make an example of him.

He's not going to be on the team after this, though the ability to sit and growl while glowing with electricity bodes well for his future prospects of playing Blanka in any upcoming Street Fighter films. (Chris Klein is ready when you are.) And in a special instance, we will grant this former, most-definitely-not-playing-football-football-player the full sum of Fulmer Cup points, because to hell with your football guest worker programs. 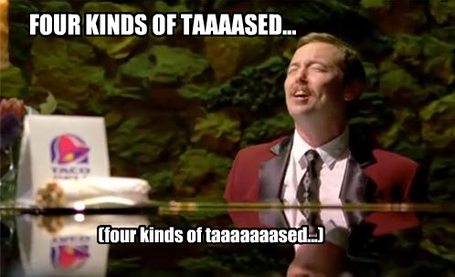 The public drunkenness, resisting arrest, disorderly conduct, underage drinking and obstruction of a highway charges (yes, obstruction of a highway, a charge an offensive lineman is really only capable of earning) are five points, and with the bonus point for getting tased FOUR TIMES Pitt receives a total of six points in the Fulmer Cup. No one's catching UVA, but just in case Pitt's dumb enough to try we'll address the issue of former/not-former lineman

The rest of the scoring is updated in speedy fashion after the jump.

KENTUCKY IS CARELESS ON THE MOTORWAY.  Wildcats defensive tackle Mark Crawford was hit with careless driving, driving on a suspended license, and driving without insurance, and Mark Richt is totally encouraging you to transfer to Athens, son. But hey, nice shirt, bro! (We're serious. We'd probably wear that.)

Three points total for all three misdemeanors, and no bonus points for shirt-power.

DUI, VPI. A garden variety two point DUI for VT's Lyndell Gibson seems kind of drab in this update, but not everyone enjoys riding the lightning in the middle of the Pittsburgh streets.

CORRECTION: The charges against Smith are misdemeanor-level, so three points is the correct tally here. Our apologies.

WASHINGTON STATE GETS SLAPPY, TOO.  Felony charges of domestic assault and the hitting girls bonus earn the Cougs four more points in the Fulmer Cup. If anyone has a prayer of catching UVA, it's the battle-tested squad from the Palouse. (Brent Musburger read that sentence, and then doubled down on his wager on the Cougs covering the spread.)

OKLAHOMA STILL INSISTS THAT WAS A SPICE GRINDER. One point for weed, and no, still not buying the "Oregano afficionado" line, sir.

INDIANA (Note): We can't issue any points due to a lack of filed charges, but to the eagle-eyed readers who pointed out IU running back Darius Willis' protective order, thanks and we will monitor.