A warning: today's bracket focuses on a topic certain to incite deep passions in our readership and beyond. Please regard others with respect, as always; remember that as a community we are only as good as we are to each other, and that disagreement with your opinion is merely that, and not an indictment of your person, dignity, or intellect.

That said: BEHOLD THE CONDIMENT BRACKET AND ITS SHOCKING REVELATIONS! 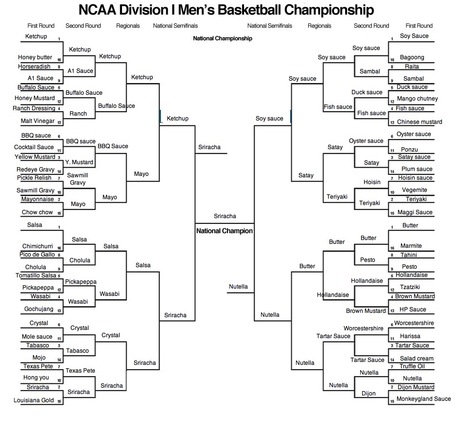 UPPER LEFT QUADRANT: THE ALL-AMERICAN BRACKET. Yellow mustard gets upset right out of the gate in a controversial loss to Buffalo Sauce, which in turn suffers an upset to humble ketchup. Ketchup drives to the final on the basis of its compatibility with cheap meats and starch, a food group that makes up 60% of the American diet. So disappointed in pickle relish, but gravy does what gravy does: covers its targets and saturates the zone, smothering all opposition before going cold and losing to Mayo.

Mayo v. Ketchup is a classic, and no, heathen, the winner cannot be "swirled pink Mayo mixed with Ketchup," because that is fucking horrible. Ketchup advances to the Final Four with its boring halfcourt offense and solid fundamentals.

LOWER LEFT QUADRANT: MOSTLY SPICY BRACKET. A truly brutal bracket with loads of upsets thanks to controversial seeding.  Pickapeppa upsets Tomatillo Salsa right off the bat; Crystal upsets Tabasco in the second round.  Pico loses due to disqualification based on it really being salsa taking up two bids in the tournament. Sriracha upsets salsa in the Elite Eight due to versatility, consistent flavor, and lower water content, completing a rampage through the Mostly Spicy Bracket.

UPPER RIGHT QUADRANT: MOSTLY ASIAN STUFF BRACKET. Soy Sauce was the clear Number One Seed here, though the story of the group became Satay's unexpectedly strong run to the Elite Eight. Most commonly asked question by a confused press corps: "Are you really just peanut butter with vinegar and onions in it?" Satay's coach: "This interview is over." [walks out}

LOWER RIGHT QUADRANT: ETCETERA BRACKET WITH HEAVY EUROPEAN ACCENT. Nutella rampaged through this bracket, causing much controversy thanks to critics who questioned its legitimacy. "You're really just eating hazelnut-flavored chocolate out of a jar and calling it a condiment!" they cried, but Nutella did not listen, obliterating everything before it and slaying mighty Butter in the Elite Eight to make the Final Four. (Butter did have a fine "Bow to your maker" moment versus a strong Hollandaise side in the Sweet Sixteen, however.)

FINAL FOUR: Sriracha's spice was too much for Ketchup to handle, ultimately, and a blowout ensued. Soy Sauce's savory collapsed beneath a wave of chocolate sweet in their matchup, and two uneven Final Four games led to a classic final between Nutella and Sriracha. The game was even until late in the second half when you finally just admitted Nutella was spreadable candy, albeit delicious candy, and awarded the crown to indomitable Sriracha, the king of condiments.