YEAH! PAC-12 DANCE PARTY! We're so disappointed the Pac-12 decided not to use the most Pac-12 band ever for their theme music for the logo unveil. Brokencyde is just sitting there waiting for your call, and yet you go with bland Garage Band twaddle? Some rebrand, bros.

There is autotune, so we suppose that's a sort of concession to the "sexy time club vibes" Larry Scott wants wafting off everything the conference does. The video does introduce Colorado and Utah, and... 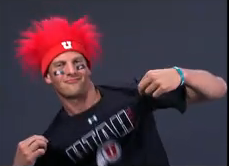 SO YOU'RE SAYING THERE'S A CHANCE HE'S NOT COMPLETELY INSANE? Chris Brown backs us up on the paranoid and muted optimism surrounding the hire of Charlie Weis as Florida OC, noting that Charlie's "pro-style" label came only after he'd run a panoply of offenses at the college level including--YE GODS--the veer.

If you're the optimistic type you'll say "Hey, this might turn out so badly after all!" And if you're pessimistic, you just read that and understood that yes, we were going to run the veer with John Brantley in 2011.

IN EXTREMELY SECRET NEWS: All three quarterbacks took snaps at Florida's first practice of the spring, which is happening even though you can't see it unless you're real clever and go on top of the parking garage next to the practice fields. NO ONE WILL EVER FIGURE THAT OUT.

JANORIS WILL RELAX, WHICH HE'S GOOD AT. Janoris Jenkins, Florida's best corner and the incumbent starter, will rest his injured shoulder this spring, and instead just kick back and heal. He can handle the pain management angle. Trust us.

WELCOME TO NASHVILLE, TANNER I MEAN KIRK! If Herbstreit's really moving to Franklin, he's going to need a few things. We know he has them, but first he's going to need khakis. Lots and lots of khakis. Second, he's going to have to pile up three, possibly four solid possessions vouching for his comfort with the faux-agrarian. He should consider a tractor in the yard that he only uses to mow the lawn, or rusting farm implements used as decoration near the gate of his house, or even purchasing a home with a dilapidated barn. (Don't knock that thing down: it's loaded with rats.)  If you don't have a truck, buy one, even if you don't need it (and you don't.) Join a church, and not the Catholic one, or otherwise everyone's gonna look at you all weird.

Finally, you should meet Clark and Tanner, since they're righteous bros and will be happy to show you around. t

FULMER CUP NOTE: We see this, and remind you that the ol' swimsuit-under-the-pants trick only works when you attempt to steal a speedo, which no one really wants back once you've gotten your bait and tackle all up in it anyway.