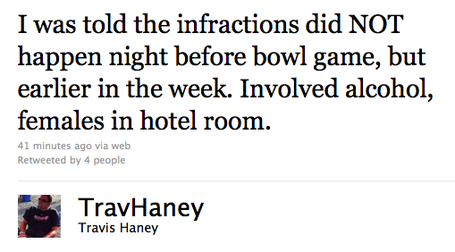 By jove, Garcia: you really are the bear who thought he was a man who thought he was a bear. So the post detailing Garcia's adventures pre-Chick-Fil-A Bowl was at least semi-accurate: he did get in trouble with coaches for hosting some form of harem training in his room, there was alcohol involved, and it was during bowl week, and he will miss at  least the first week of spring practice due to the episode.

The legend of Don Esteban Garcia grows: first he freed Paraguay from the iron hand of the demented apostate Jesuit overlord, then rode across the impenetrable jungle with a steamboat across his back. When he arrived in Manaus, he married 24 women and got them all with child simultaneously, forgetting to take the steamboat off, so powerful was he. Then a mighty ditch he dug across old Panama's isthmus, and when he saw the flags of ships of the main line passing through his wake, said "Small ships flow in great vessel's paths, but I simply wanted to make Panama humble let it think itself too important. WHUSKY SENORITA BY DAMN, SINCE RUM BE FOR THE SCLEROTIC IGUANA AND MALARIAL ENGLISHER! *"

*From The Account Of A Visit To The Southerlands With The American Toronado, Esteban Garcia.  By Alastair Gordon, OBE, 1917.