THIS IS PROBABLY A SECONDARY VIOLATION.  HEIL DOOLEY. 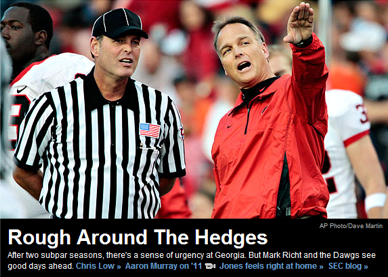 Georgia's recent blip of secondary violations is a something less of a blitzkrieg (hahahahahhahGETIT?) and more of a random spike attributable to Mark Richt showing he does not want to be fired by speeding five miles over the speed limit, but it is amusing nonetheless, especially the bizarre move to turn over the strength and conditioning program to their old video coordinator. Their new training program is not far removed from the training montages in Rocky IV , thus explaining the recent hire of two former KGB agents to trail ever player at all times in their toting of railroad ties up hills and buggy carries.

On the substantive side: Jordan Reed is going to tight end, Trey Burton will be an "F-back," a hybrid position that sounds a lot like what he did last year, actually, and John Brantley will be the starter for the moment. Weis mocked Brantley for coming to play in a spread system, something Brantley might have been hurt by had he not been knocked deaf by constant battering last year. (Being functionally deaf for half of the season might have improved his prospects, as anything Steve Addazio had to tell him would have only damaged him further.)

STREET AGENT IS A FANTASTIC TERM. You pay a "street agent" for services and get a solicitation charge, and LSU and Oregon do it and it's all okaaaaaaay. LSU's sum paid to Will Lyles $6,000 to Lyles' recruiting service for two states' worth of JUCO tape and breakdown, a sum falling well short of the $25K Oregon paid Lyles' for his work. This is completely above board until the NCAA says it isn't, which they will do sometime in the next five minutes or years depending on the random spider god who runs the NCAA.

AND TEXAS GETS $58 MILLION OF IT.  Fox is working a $60 million deal with the Big 12 for tv rights, and we will bet you a knucklebone the Longhorns get a disproportionate share of it because they are Texas, and that's what they do.

FUN SIDE NOTE: Austin is its own recruiting advantage, because seriously, after spending an early spring weekend there and knowing what we know about the other collegiate locales in Texas, how the hell College Station or Lubbock get any recruits is beyond us. If you wonder why the tables are tilted so solidly towards Texas, go to Austin and nod knowingly. Texas recruits downhill in its own state, and the centerpiece of that is Austin and the furious money machine behind UT-Austin.