We'll be declassing the place at South By Southwest this weekend, so if you're in Austin stop by any one of the Tweetups we'll be participating in as a panelist or glorified swag vulture. (You'll have to follow! Mostly because we're so disorganized we don't even know where we'll be aside from our panel! Sweet bio, brah! Keep Austin weird bats our liquid cheese is so much different than yours we promise!) 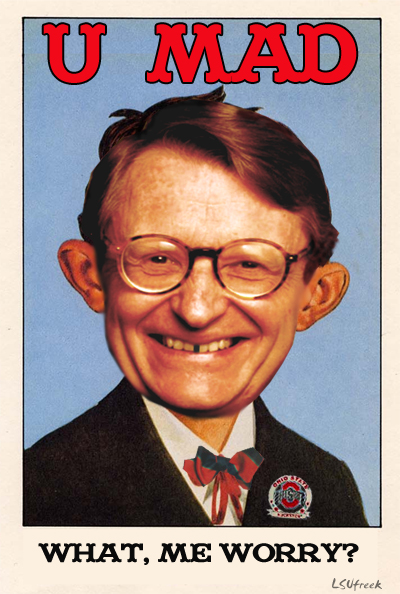 Jim Tressel still has no plans to fire the tOSU president, though Tressel did consider giving himself sterner penalties than those he received because Jim Tressel is the Cardinal Mazarin of Columbus and is the power behind the throne. We only hope this fantasy is actually true, and that Tressel's imperial guard looks like the ones in Return of the Jedi, but wear Buckeye mojo necklaces and carry 30 packs of canned domestic beer instead of huge staffs. #JimTresselIsEmperorOfColumbus

BARRY SWITZER ALWAYS HAS PERSPECTIVE. The Boyd Crowder of football in that you might have hated him for being the embodiment of evil at one point long ago in the story arc, but a figure of such obvious and quotable charisma he ultimately comes over to being an antihero of the first degree.

That might be one of the better metaphors for the entire situation: Tressel jaywalked, then denied it to the policeman who stopped him for it, and then ran when questioned. That the policeman is in fact a legless, blind dwarf is an important detail we just completely glossed over, but this is blogging, not narrative. ROLL WITH IT.

PLEASE LET US DESIGN THE STATUES. If we had a choice for each one, it would be this for Spurrier, this for Wuerffel (LOL WUERFFELBACK,) and this for Tebow. The Tebow statue's arm would be empty for easy placement of real babies for photo-taking.

SEEMS LEGIT TO ME. He's on a fixed income, y'all. No way he's gonna fix this obviously poisoned tree by hisself.

THIS ISN'T NEWS IT HAPPENS EVERY DAY. The EDSBS strength coach demands a correction, as he is a Category 5 storm all the time.