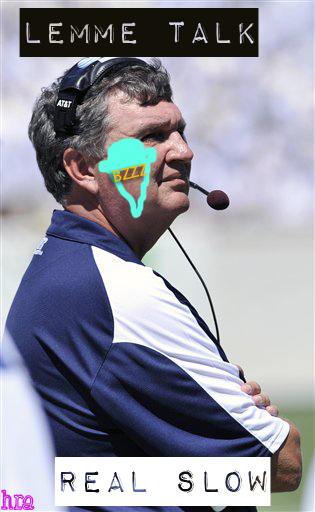 Georgia Tech coach Paul Johnson does not care what you think about anything ever, and continued his lifelong demonstration of this commitment to not giving a blue fuck about your thoughts or feelings by telling Atlanta talk radio host Matt Chernoff "Let me talk real slow and I'll try and explain it to you" in a discussion about recruiting and visiting while committed. It's around the 5:30 mark if you want to listen to it, but we don't care if you do or not. Paul Johnson saw you with your flashers on at 3:30 in the morning on the side of the interstate and thought nothing, because your dumb ass should have checked the engine before you left. (HT: Blutarsky)

CLOSED PRACTICES BECAUSE FOOTBALL IS SO COMPLEX. Florida is closing practices because team closeness bonding strategy blah blah and here's the Saban/Belichick cloak descending over the program, which is different than the Meyer tarp in that they'll get secretive about things, but be very nice about telling you why they can't say anything about it. A kinder, gentler obstruction is the key, and we're okay with all but one element of it: not being able to watch spring practices, one of the more pleasant things you can do in Gainesville in March.

D'OHHHHHH. Georgia will be hit with five minor violations of the NCAA's extremely clear and not-at-all-nonsensical recruiting rules in the announcement of Ray Drew's commitment. The central violations involve having David Pollack and Randall Godfrey speaking at the announcement, a practice forbidden by the rules and self-reported by Georgia AD Greg McGarity. Minor infractions like this are usually handled internally, and Drew's eligibility is not expected to be affected. PETA still wants to know what the hell happened to that puppy in the Isaiah Crowell announcement. (Isaiah: "What dog, man?")

STOOPS IN THE HOUSE. Chris Petersen's like some kind of yogi on the mountain you have to go visit, dude.

WHAT IF BO PELINI WERE A MEDIA DARLING? The answer to this question: he would not be Bo Pelini, and he'd probably just channel his anger in another way, something the kickable dogs of the world thank Pelini for every day.